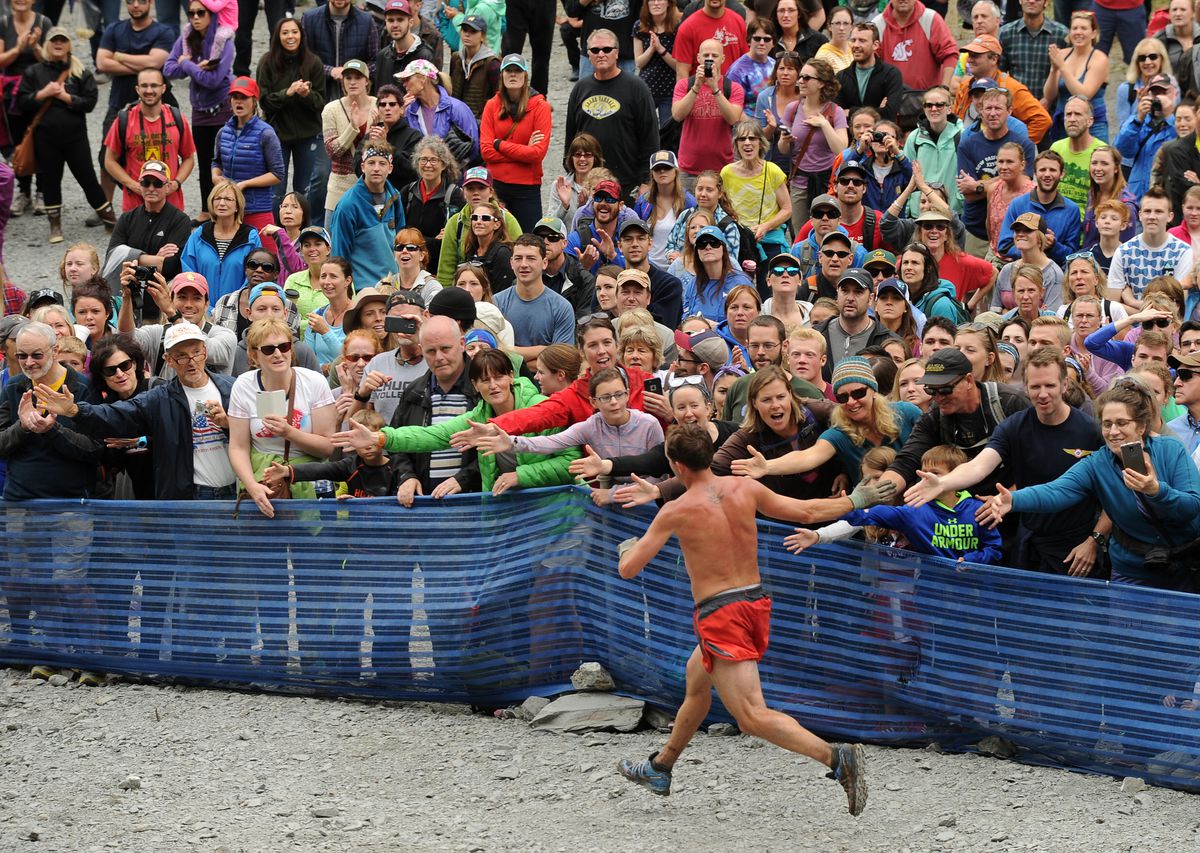 A runner collects high-fives from the crowd at the base of the mountain during the 2016 Mount Marathon race in Seward. (Bob Hallinen / ADN archive)

A runner collects high-fives from the crowd at the base of the mountain during the 2016 Mount Marathon race in Seward. (Bob Hallinen / ADN archive)

This year it’s bringing another rarity — a Mount Marathon not on the Fourth of July.

The 93rd edition of the perilous and punishing 2,974-foot scramble up and down Seward’s famous mountain peak will happen July 7 — a Wednesday.

Independence Day is the previous Sunday, and race officials decided a midweek race might lessen the crush of visitors to the small town that overlooks Resurrection Bay.

Race director Matias Saari said officials considered “the challenge of mitigating risk among spectators and participants during a pandemic” when making their decision.

The date change is not unprecedented. Saari said the 1927 race was moved to Sunday, July 2, at the request of visitors who couldn’t stay beyond the weekend.

Add to that thousands and thousands of people who come to Seward in part to watch the spectacle of people jumping off cliffs, speeding downhill on loose rocks and shale, glissading on snow patches and absorbing the physical torture associated with the effort. On race day, Seward’s usual population of 3,000 swells into something much bigger.

Hundreds watch the race from the base of the mountain. Thousands more stand sometimes three or four deep along Fourth Avenue and other downtown streets to watch the start and finish. And hundreds hike up the mountain to watch from there.

Saari said he believes crowds “will be much smaller on a Wednesday and that is important for holding a race as popular as Mount Marathon during COVID-19.”

[Mapping project shows Mount Marathon race’s iconic elevation of 3,022 feet should be knocked down to 2,974]

He also doesn’t think all of the thousand runners currently signed up will show up. Some will defer their entry to next year, some will request waivers for medical or other reasons, and some simply will not show up, he said.

“The actual number of participants on July 7 is expected to be substantially lower than 375/375/300,” he said.

This will be the third straight difficult year for Mount Marathon, a race so popular that gaining entry can sometimes be as challenging as the mountain itself.

Last year’s cancellation was the first since 1942, and the 2019 race was held as smoke from nearby wildfires filtered into Seward. The junior race was canceled out of safety concerns, and some of the race’s top athletes chose not to compete out of concern for their respiratory health.

[On a quiet 4th of July in Seward, three race legends take on Mount Marathon]

Saari said that although planning for the race is ongoing, there is no guarantee it will happen.

A final decision on the race’s status will be announced by June 4, he said, “after careful consideration of the pandemic’s situation and local, state and national health mandates and recommendations.”

“Our priority is to make the event as safe as possible for racers, volunteers, officials, sponsors, spectators and the residents of Seward,” he said.

In other decisions about the 2021 race made earlier this month by the race committee:

• The traditional July 3 in-person bib auction will become an online auction held in June on a date to be determined. Ten men’s spots and 10 women’s spots will be sold to the highest bidders.

• Men’s or women’s lotteries will not be held.

• A junior race lottery for 44 available spots will be held, with applications accepted from March 1-15.

[An Anchorage man paid $1,600 for a Mount Marathon bid and things went downhill fast after that]