The infield was a lake a month ago, but Alaska Raceway Park is ready for Sunday’s season-opening races 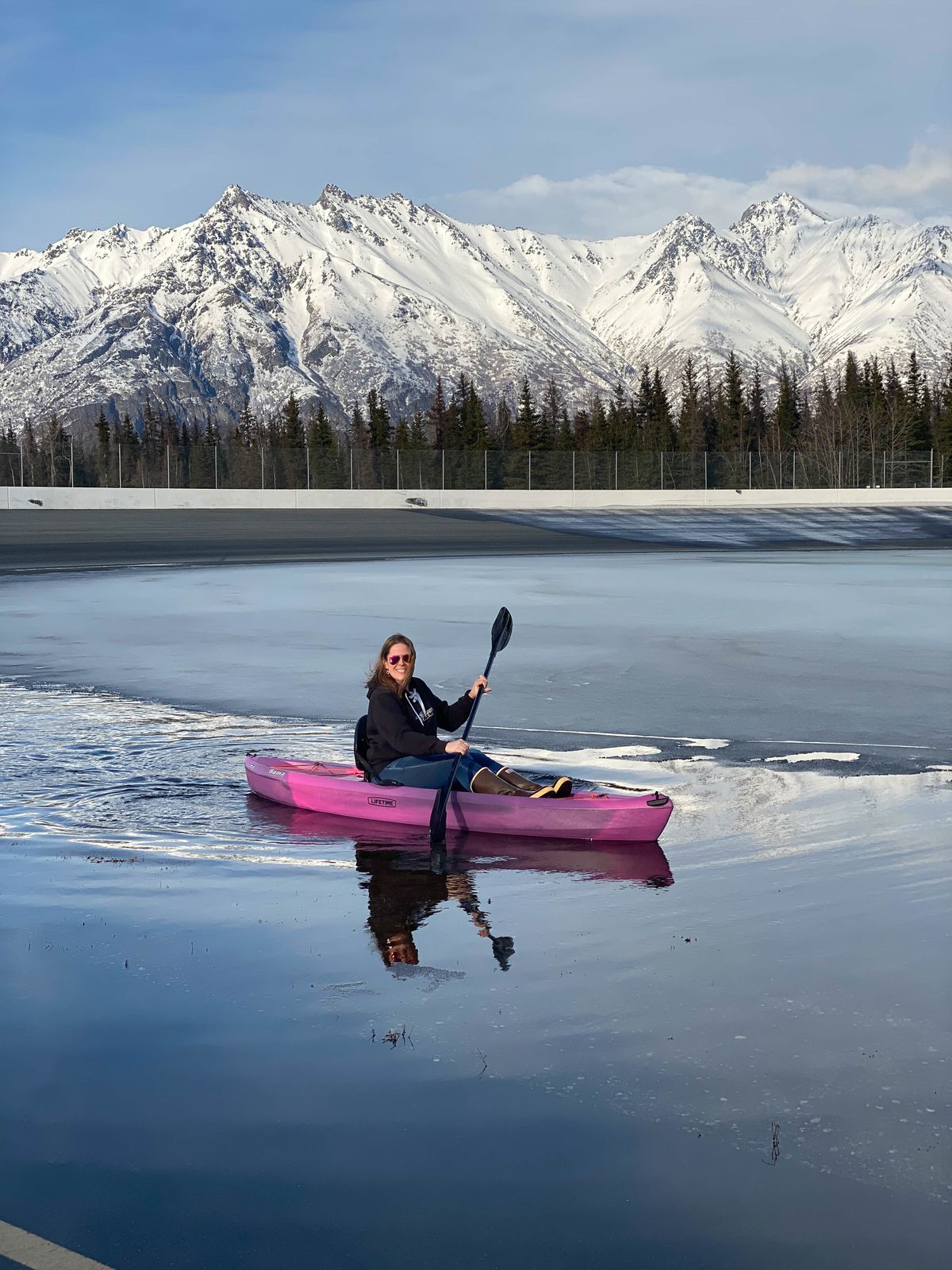 Alaska Raceway Park opens for the season Sunday, which is a little remarkable considering less than a month ago owner Michelle Lackey Maynor was kayaking across the infield of the oval track.

A snowy winter meant a lot of snow melt come breakup, enough to fill the infield at the Palmer racetrack.

The track shot a video of Maynor kayaking across the temporary pond to help attract votes in a nationwide contest that will award the winning track $50,000. Alaska Raceway Park is one of six finalists in the Advance My Track Challenge, and a winner will be picked in an online vote Sunday and Monday at advancemytrack.com.

A victory would help increase accessibility for people with disabilities, provide a playground for kids and more, Maynor said.

But even without the prize money, there’s a lot of new stuff in store this summer.

A midway carnival will set up next weekend and run every Saturday and Sunday till late July, when it heads to the Tanana Valley State Fair in Fairbanks. Carnival rides will be in the parking lot, outside the raceway’s entry gates.

Kids as young as 8 — who already can compete in junior dragster races on the quarter-mile drag strip — can now also start their engines on the one-third mile asphalt oval. The track’s new Bandolero classification is for entry-level cars with 30 horsepower motors; speeds are expected to reach 50 mph or more.

“We announced last year that we were going to have this class for the kids, so everyone’s been busy buying up the (cars) in the state or getting them from Outside,” Maynor said. “One of my drivers picked up four from a track in California that closed. They’re around. They used to race them at North Star Speedway, and when they closed (the cars) didn’t have anywhere to go. They’re in the Fairbanks and North Pole area as well.”

There’s one at Maynor’s house too — her 11-year-old son Teddy will be a Bandolero driver this summer.

Maynor said entry-level car racing is cheaper than hockey — once you’re past the initial investment. For Teddy’s car that meant about $5,000 — $2,000 for the car, $1,000 for the motor and the rest on safety equipment.

“Once you get past that, it’s just gas and tires and entry fees,” she said.

Bandolero drivers and other circle-track drivers won’t race until next weekend. Opening day is for junior dragsters, an open test-and-tune “so everyone can shake the cobwebs off,” Maynor said, and the Hunison Cup bracket drag race.

Opening day is also for moms, because it’s Mother’s Day. Maynor has a bucket in her office filled with 14 dozen carnations that will be given to the first hundred or more moms through the gate Sunday. The track opens at 10 a.m., with racing at 2 p.m.

“Voting is Sunday and Monday, but since it’s Eastern (Daylight) Time we get to start voting Saturday night,” she said.

Maynor has been busy posting videos and photos to the track’s Facebook page and YouTube channel in order to inspire voters. In a recent post she wears a red blazer, sits at a desk in front of giant NASCAR and NHRA banners and sounds and gestures just like a politician as ‘My Country Tis of Thee” plays in the background.

“Vote like your asphalt depends on it,” she intones.

“My sister-in-law said I look a little like Sarah Palin. I’ve got my hair up and my little reader glasses on,” Maynor said.

Alaska Raceway Park was one of 22 tracks nominated for the contest, sponsored by NASCAR Adance Auto Parts. After a month of online voting, it was one of six to advance to the finals.

Promotional videos for all six tracks — others are in Florida, Maine, Iowa, Michigan and New Hampshire — appear on the contest website. None has an opening shot that rivals Alaska’s entry, which shows the track backdropped by Pioneer Peak.