With a huge assist from basketball, Anchorage’s Bentiu Panoam becomes the 1st person in his family to graduate college 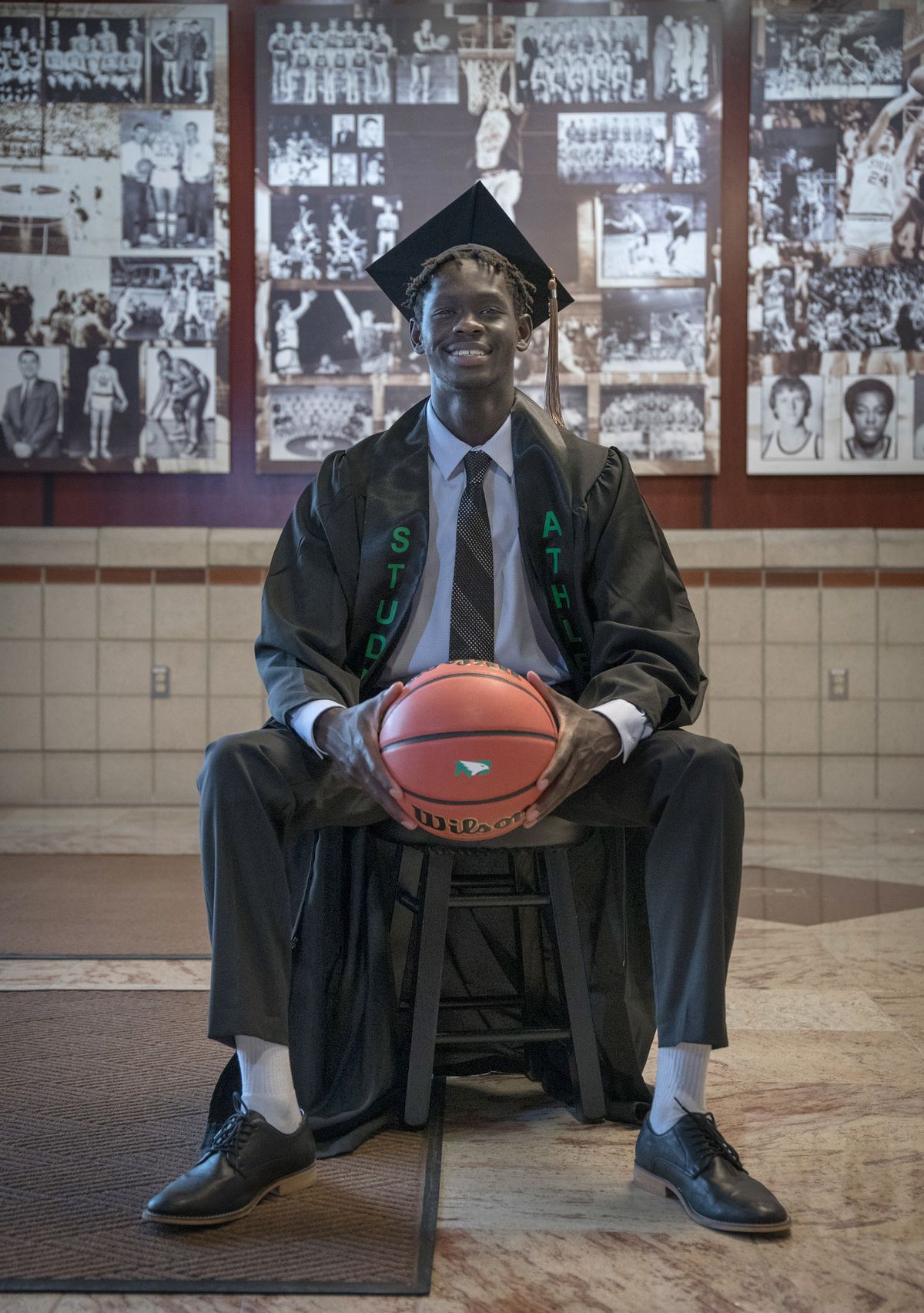 Bentiu Panoam of Anchorage wears his cap and gown after becoming the first person froom his family to graduate from college in May 2021. Panoam, who attended the University of North Dakota on a basketball scholarship, is the son of Sudanese refugees and one of 10 children in his family. (Photo by Crystal Saddler)

Bentiu Panoam of Anchorage wears his cap and gown after becoming the first person froom his family to graduate from college in May 2021. Panoam, who attended the University of North Dakota on a basketball scholarship, is the son of Sudanese refugees and one of 10 children in his family. (Photo by Crystal Saddler)

Bentiu Panoam marked his graduation from the University of North Dakota last month with a virtual commencement and a “grad walk/photo opportunity” during which he dressed in cap and gown and walked across a stage for a handshake with the university president.

There was no audience to speak of, yet the Anchorage man was not alone.

After he walked, Panoam, a 2016 Bartlett High graduate, shared the moment in a phone call with his mom while she was at her job at a fish cannery in Anchorage. He was still wearing his cap and gown when they spoke.

“I Facetimed her when she was on break, and she started singing,” Panoam said. It was a Sudanese tribal song with his name in it, he said. She celebrated in English too, he said: “Look! He did it!”

A few days later, he posted news of his achievement on Twitter: “First person in my bloodline to graduate college. Use sports as a vehicle, don’t let sports use you,” he wrote.

First person in my bloodline to graduate college.

Use sports as a vehicle, don’t let sports use you 🙏🏿 pic.twitter.com/PBkwsqz2nW

Panoam, 23, attended the University of North Dakota on an athletic scholarship. Although he is a serious student — he graduated with a finance degree and a 3.29 grade-point average and already has started graduate work on an MBA — he will tell you he would not be in a college classroom, much less in cap and gown, without basketball.

Basketball spurred him to keep his grades up during middle school and high school, and it made it possible for him to attend college.

“That’s really the only way,” he said. “I knew basketball would take me somewhere in life. When I was in the seventh grade my coach really took an interest in me and said, ‘You could really do something with this.’ And college ended up being an opportunity for me.”

The goal was to play Division I basketball — no easy feat. A slender 6-foot-2 guard with a sweet perimeter shot, Panoam was the Cook Inlet Conference player of the year as a senior at Bartlett, where he averaged 20.7 points, 6.4 rebounds and 4.2 assists per game. That garnered some scholarship offers from junior colleges and Division II schools, he said, but he turned them down.

To make himself a more viable Division I prospect, Panoam went to work — and not just on his jump shot.

After graduating from Bartlett, he spent a year at the Impact Academy in Las Vegas, an esteemed basketball prep school for high school and post-high school players.

“It wasn’t a scholarship thing,” he said. “I paid for that myself. I worked 17 to 18 hours a day every day in the summer. I was working at a fishing cannery in town alongside my mom, because that’s what she does. I’d go to work at 6 a.m. and leave at 10 p.m. from May to September so I could pay for my prep school.”

The reward wasn’t immediate. After a year in Las Vegas, Panoam spent a year at Northwest Kansas Tech in Goodwin, Kansas (”It’s close to nowhere,” he said). He averaged 10.9 points and 3.7 assists while shooting 46.2% from 3-point range and maintaining a 4.0 GPA, numbers that caught North Dakota’s attention.

“It was free school and my dream — Division I,” he said. “I’m in North Dakota, but I love it. It’s a college town and everyone shows me love.”

He was a reserve guard as a sophomore and junior, playing behind all-Summit League guard Marlon Stewart. His breakout season came as a senior, when he earned starts in the final 13 games of UND’s 9-17 season. He averaged 9.4 points a game and shot a team-best 42% behind the arc (29 of 69).

Because of COVID-19, NCAA athletes who competed in the 2020-21 season will get an extra season of eligibility, and Panoam is already on North Dakota’s roster for next season as a fifth-year senior.

[As his senior year wraps up, Anchorage’s Bentiu Panoam is playing his best basketball]

If basketball presents him with a chance to play professionally overseas, he’d probably pursue it. If it’s the right offer.

“I have to start giving back, helping my parents,” he said. “I have to start making big-boy moves. If overseas was paying me a good amount of money, I’d do that, or maybe just do it for a year just for the opportunity. But at the end of the day if it’s not taking care of me plus my family, I (have to) make decisions that will help me.”

It wasn’t until his virtual graduation ceremony approached that Panoam began to appreciate what earning a college diploma means for someone who is the son of refugees. His parents didn’t go to college, and as far as Panoam knows no one before them did either.

“They’re from South Sudan, so I don’t even think they’ve had any education really,” he said of his extended family. “I didn’t realize it was that big of a deal until (a friend) said, ‘When you graduate it’s not just you walking — it’s your family.’ It’s me, it’s the community — that’s when it hit me. It’s way bigger than me.”

Panoam said he is especially eager for his younger siblings to learn from his example. In his family, when an older kid goes to work out, four younger kids go too. It can get competitive, he said, recalling a day when he went to Kincaid Park to run sprints up the sand dunes and some of his younger brothers came with him.

“We were racing up the hill and they wouldn’t stop, because one had to do one more than the other. We were there for four hours,” Panoam said. “When we were leaving, one ran back up and I had to tell the other one, ‘No, let him have it.’