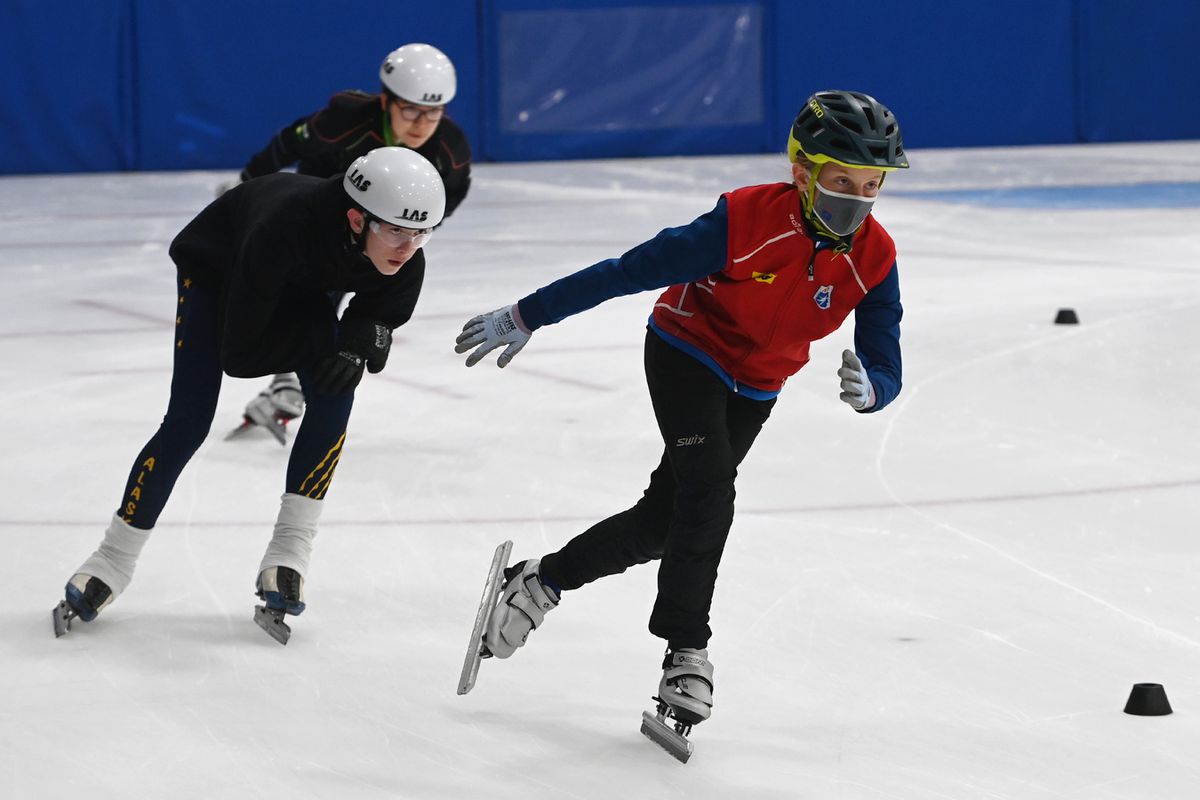 When one of the kids forgot to close the bench door after stepping onto the ice for speedskating practice Wednesday at an indoor rink in South Anchorage, coach John Monroe treated it as a teaching moment.

Leave the gate open like that, he told skaters, and someone could get hurt. He went on to share a few other safety tips about the sport, where high speeds sometimes send short-track skaters crashing into the boards. That’s why, as skaters warmed up on the ice, Monroe placed big, thick pads against the boards in the places where impact is most likely.

Monroe coached a group of eight skaters on the opening day of on-ice summer training for the Alaska Speedskating Club, which was just honored by U.S. Speedskating as the club of the year for medium-sized clubs.

Two years ago, the club was nominated — but did not win — the award for small clubs. The fact that it made the move from small club to medium-sized club in such a short span is a big reason why it earned national recognition last month.

When the virus was spreading rapidly last winter, Monroe and others decided to stop indoor practices at the club’s home rink at Royal Business Systems Ice Center and move outdoors for the winter.

The club was already making good use of the 400-meter outdoor oval at Cuddy Family Midtown Park, so it decided to spend the bulk of the winter there. The visibility of weekly practices at the midtown rink helped lure more people to the club, Monroe said.

“It’s one of six Olympic-sized ovals in the country, and we were able to turn (COVID-19) into an advantage,” he said. “It’s a fun environment and we had great weather.”

Martin Leonard’s 11-year-old daughter Jojo is among those who joined the club in the last year, and Leonard said the midtown rink is part of the attraction.

“That’s what got us serious about the sport, was having that rink,” said Leonard, who has since become one of the club’s board members. “This year we skated outdoors for six months.”

Monroe, 60, brings considerable expertise to the club. As an athlete, he was a member of Canada’s inline skating team for several years and a two-time medalist at Canada’s short track championships. As a coach, he worked with U.S. Speedskating for several years and was a coach for Netherlands at the 2010 Winter Olympics, where he guided the women’s short-track team to a fourth-place finish in the relay.

“John is one of the best-kept secrets in winter sports here in Alaska,” Leonard said.

Just as he saw opportunity when he helped the club pivot to outdoor training during the pandemic, Monroe sees a chance for membership to continue growing as Alaska prepares to host the 2024 Arctic Winter Games in the Valley.

“We want a full team of eight men and eight women to represent Alaska,” he said.

“That’s a really nice selling point,” he said. “A kid could join the club today and in 2024 they could be in international competition.”