Alaska Run for Women goes virtual for another year, and one team’s message is very real: Don’t delay mammograms 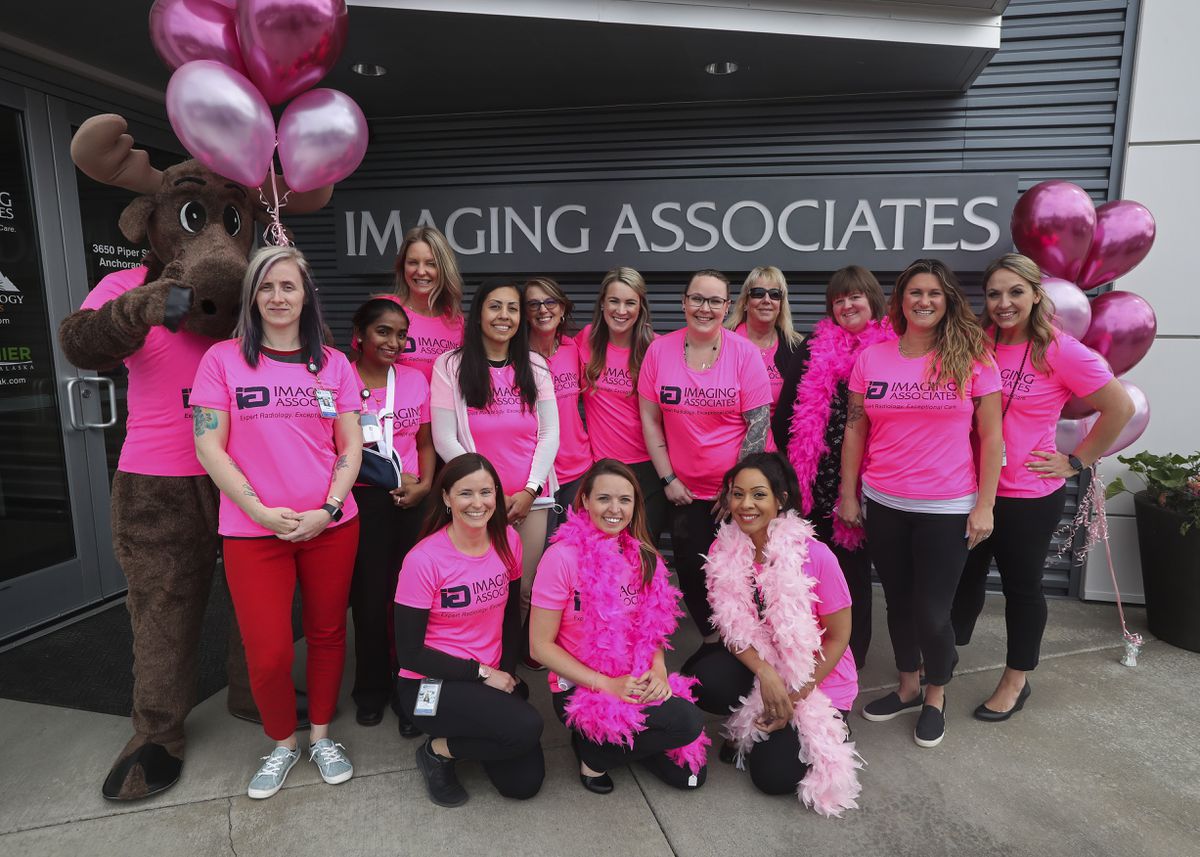 Members of "Squeeze 'em for a Reason," a team formed for the annual Alaska Run for Women, gather outside Imaging Associates in Anchorage on Thursday. (Emily Mesner / ADN)

Members of "Squeeze 'em for a Reason," a team formed for the annual Alaska Run for Women, gather outside Imaging Associates in Anchorage on Thursday. (Emily Mesner / ADN)

Nothing mixes tears and laughter quite like the Alaska Run for Women, and nothing shows the two sides of the event quite like some of the T-shirts worn by participants.

The race, which this year is an eight-day virtual run beginning Saturday, strives to raise awareness and money to support the fight against the disease. And while race day produces its share of somber moments, it’s also a time to celebrate survival, sisterhood and the color pink.

Look at the backs of many runners, and you might shed a tear. Many write the names of loved ones on cards pinned to the backs of their shirts -- “In memory of my aunties,” perhaps, or “In honor of Grandma.” There are thousands of names and each represents someone with the disease, some who are alive, some who are not.

Look at the front of the T-shirts, and you might bust a gut laughing at the jokes and puns. “Save the Ta-Tas.” “Justice for Jugs.” “Rack Pack.” “Breast Friends.”

A year ago, the team for Imaging Associates went with the name “Simply the Breast,” a nod to the old Tina Turner song.

This year, the team is going with a name appropriate for a world emerging from a global pandemic: “Squeeze ‘em for a Reason.”

Their message: If you delayed your mammogram because of COVID-19, don’t delay any longer.

“There’s been a lot of discussion among breast imagers about people delaying their screenings,” said Dr. Brittany O’Steen, a diagnostic radiologist with fellowship training in breast imaging. “This is definitely unprecedented in my career.”

Women who skipped their yearly mammograms are starting to resume screenings, “and we’re finding things that would have been nice to find multiple months ago,” O’Steen said.

“I don’t know that we have data -- it’s kind of early in the recovery -- but I know just from our day-to-day numbers that I believe the data will bear out that we are seeing more cancers from this,” she said.

O’Steen is a member of “Squeeze ‘em for a Reason” along with Sarah Wottlin, the executive assistant for Imaging Associates and Alaska Radiologist Associates. Both women say there’s no backlog for mammogram appointments.

“Please come in,” Wottlin said. “We can get people scheduled within a day or so.”

Wottlin, 37, is in her first year as race director for the Run for Women, which because of the pandemic is a virtual event for the second year in a row.

Participants have eight days, from June 12-19, to do either the five-mile event or the one-mile event. As of Thursday afternoon, 2,875 people had signed up, including 301 survivors of breast cancer.

Online registration at akrfw.org is open until the final day. Donations, which hit $130,000 on Thursday, are encouraged in lieu of an entry fee.

Wottlin said she plans to take advantage of the event’s eight-day duration. Her team plans to participate in several smaller groups, and she plans to join a couple of those groups. She plans to climb Flattop with one group and run on city streets and trails with another.

“I’m going to try to get out every day,” she said, sometimes for one mile but at least once for five miles.

Saturday’s kickoff will include opening ceremonies on Facebook live, which will feature Alaska’s most famous breast cancer survivor -- Olympic gold medalist Kikkan Randall. Randall, a past Run for Women champion who discovered a lump several weeks after her triumph at the 2018 Winter Olympics, will lead a warmup session along with Sadie Maubet Bjornsen, a recently retired two-time Olympian.

Because the 29th edition of the race is virtual, people anywhere can participate. People in all 50 states and Washington, D.C., are signed up, as well as people from 61 Alaska communities.

Of the 35 members of “Squeeze ‘em for a Reason,” several live outside Alaska, including O’Steen’s mother in Wisconsin and her sister and sister-in-law in Vermont. Her mother, Karen, has survived breast cancer multiple times

“She’s a great poster child why screening really matters,” O’Steen said. “She got her first diagnosis in her 40s. She had an annual screening and they found a small area that turned out to be Stage 1 invasive cancer and only needed a lumpectomy and radiation.

“Ten or 15 years later, she was still getting annual screenings and they found calcifications on both breasts. She opted for mastectomies and didn’t need any treatment other than that. All because she was persistent in getting her screenings. She’s a busy woman, but she made time for it.”