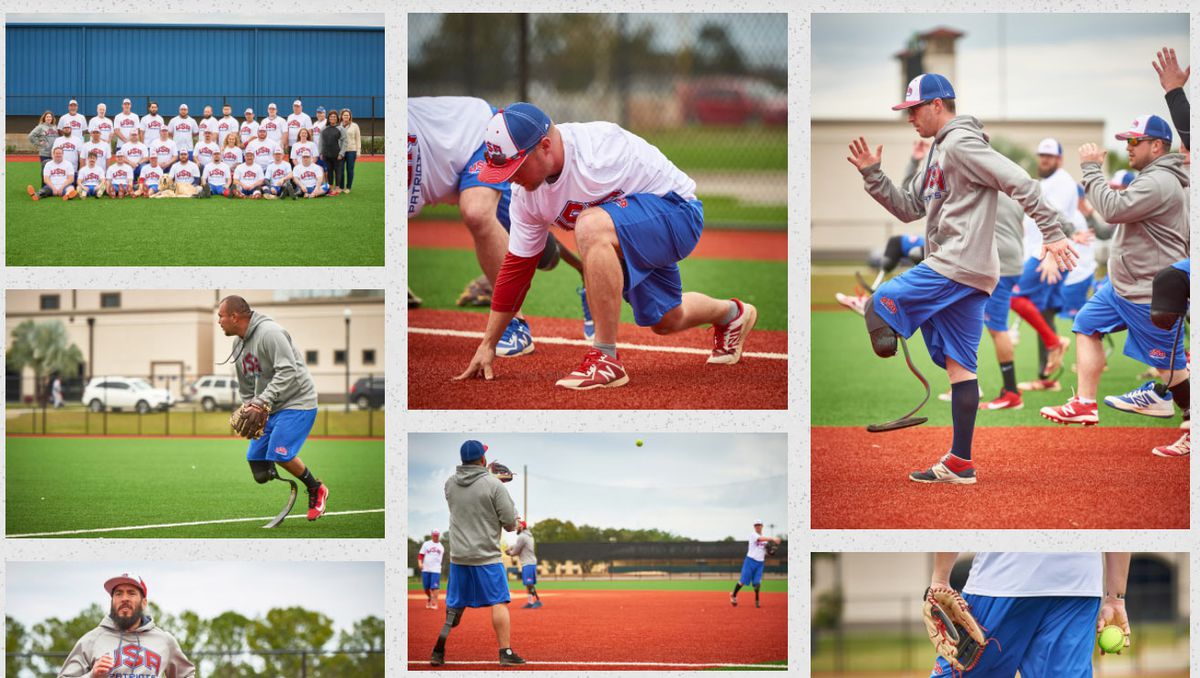 The USA Patriots softball team, shown here in a screenshot from its website, is in Anchorage for a two-day tournament at Cartee Fields.

The USA Patriots softball team, shown here in a screenshot from its website, is in Anchorage for a two-day tournament at Cartee Fields.

One of the teams entered in this weekend’s Pot of Gold softball tournament at Cartee Fields comes to town with a rider list, sort of like a rock band. The game-day requests include:

• At least 48 bottles of water/Gatorade/Powerade or jugs of water with cups in the dugout.

And then there’s this:

Clearly, the USA Patriots are not your every-day softball team.

Formerly called the Wounded Warriors Amputee Softball Team, the Patriots are a squad of amputees — every player is missing a limb or another body part, and all but one is a military veteran injured while on active duty.

“We are, as I like to call us, America’s softball team,” said Desiree Ellison, the executive director of USA Patriots Veteran Athletics. “We bring a whole lot of everything — the skill, the story behind who we are and what it is we’re doing.

“A massive part of what we do is connect our guys (to communities) and give them an opportunity to serve beyond the uniform, which has become our slogan.”

During their extended stay in Alaska, the Patriots have a packed schedule that includes a Friday night meet-and-greet at an American Legion club, a Friday clinic at the Special Olympics headquarters, softball games Saturday and Sunday at Cartee Fields, a Monday visit to the VA Hospital and then a couple of days for sightseeing.

“We do 17 or 18 events a year, and I try to pick one big event a year, and this is obviously our big event this year,” Ellison said. The excitement level among players is high, she said.

The 18-man roster includes players who are missing hands, arms, legs and eyes. None are in wheelchairs but many use prosthetics — another part of the team’s game-day requests is no interviews for 30 minutes before a game, so players have ample time to warm up and make sure their prosthetics are fitting well.

Among the players is Reece Hines, who lived in Eagle River before moving to Texas and still has connections here. A retired Air Force master sergeant, Hines lost his right eye and two fingers while attempting to disarm an IED while in Afghanistan in 2011. He also suffered skull and facial fractures, nerve and tissue damage to one of his legs and other injuries.

Others on the team have lost legs or arms. The only player who isn’t a military veteran is 18-year-old Scotty Fura, who was a little boy when he lost an arm in an accident involving a lawn mower. He got involved with the Patriots when he attended one of the organization’s annual Kids Camps.

Twenty children each year are invited to attend the week-long Kids Camps, which this year is being held in Wisconsin. Ellison said the Patriots raise $180,000 a year to make the camp happen.

Fura exemplifies what the Patriots hope to achieve, both with the Kids Camps and their visits like this week’s to Anchorage.

“He may not be a veteran but ... he’s everything we hope to give to these children — to have them grow up with a love of sports,” Ellison said. “He was the pitcher on his high school team, he wrestled and played football. He did all this thanks to the exposure he had” at Kids Camp.

Roger Garcia, the commissioner of USA Softball of Alaska, said bringing the Patriots to town was a five-year effort. “Five years of planning, preparing, getting sponsorships and donations,” he said.

Garcia said he learned about the Patriots at a national softball convention a few years ago and later saw them play at a tournament in Ohio.

“They take it very seriously, but it’s also educational for them, to teach people that life isn’t over after an amputation or a disability,” he said. “You can carry on and things aren’t that bad.”

In the case of the Patriots, the players are carrying on quite nicely. They have made several appearances at the McQuade Charity Softball Tournament, a huge event in North Dakota that draws hundreds of teams. After twice finishing third in their division, the Patriots won their division at the 2019 tournament.

The Patriots are guaranteed four games this weekend at Cartee Fields. Their first game is Saturday at 10:20 a.m.