No shoe deal? No problem for Ketchikan runner Isaac Updike, a legitimate contender for the US Olympic team 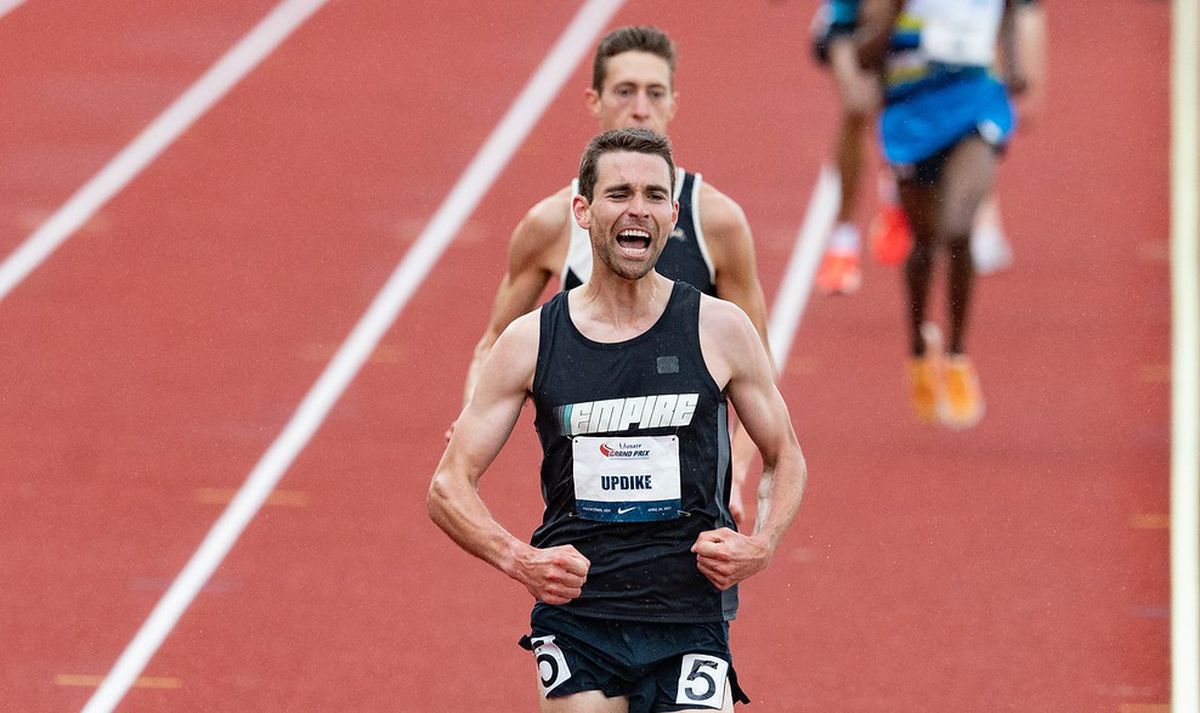 Isaac Updike of Ketchikan reacts after posting a personal-best to win the steeplechase at April's Oregon Relays in Eugene, Oregon. (Photo by Timothy Healy)

Isaac Updike of Ketchikan reacts after posting a personal-best to win the steeplechase at April's Oregon Relays in Eugene, Oregon. (Photo by Timothy Healy)

He lost his primary sponsor earlier this year, and the team he trains with doesn’t have a sponsor either.

And yet absolutely none of that will matter next week when Updike makes his bid for a spot on the U.S. Olympic track and field team.

Updike, 29, will be among the favorites in the men’s 3,000-meter steeplechase preliminaries at the U.S. Olympic Trials, which run Friday through June 27 in Eugene, Oregon.

Updike’s personal-best time of 8 minutes, 17.74 seconds, posted at an April track meet in Eugene, ranks as one of the best times in the world this season -- and tops among Americans.

Three men will make the U.S. Olympic team in the steeplechase, and seemingly two of the three spots are up for grabs. 2018 Olympic silver medalist Evan Jager withdrew earlier this week because of injury, leaving Hillary Bor as the favorite with a top qualifying time of 8:09.33, which he ran in 2019.

That prompted Runner’s World to mention Updike as a top contender in a story posted Thursday. “A Guy Who Used to Work at a Big Box Retailer Will Make the Olympic Team,” the magazine predicted, a reference to Updike and fellow steeplechaser Dan Michalski, a former Wal-Mart employee.

Updike is the kind of athlete the word “journeyman” was invented for, someone who has toiled outside the spotlight while ascending one tier after another in his quest for world-class greatness.

“It’s another level. I think back to high school when I ran cross country and progressed to the point where I finished fourth at state. Then you fast-forward into college when I got into steeplechase, and by the time I was a junior I had the fastest time going into the NAIA finals, which I ultimately won that year.

“I’ve gotten there at every other stage of my life, and so it’s exciting to be at the peak, or almost the peak. The Olympic finals would be the next level that I hope to get at in the next couple of years.”

But first come the Olympic Trials next week.

Updike will race in the preliminaries Monday and is expected to advance to Friday’s finals, where he’s a threat to post a top-three finish and earn a trip to the Tokyo Olympics.

Updike likes his chances at the Trials after his incredible race in Eugene about two months ago, when he slashed eight seconds off his previous best with a performance that included a head-turning final lap of 59.13 seconds.

Updike qualified for the 2021 Olympic Trials in 2018 with a time of 8:25.38, and while that was good enough to get him to the trials in Eugene this month, it wasn’t fast enough to get him to the Olympics in Tokyo next month. The qualifying standard for next month’s Summer Olympics is 8:22, and Updike wanted to hit that mark prior to the Olympic Trials.

After going nearly two years without racing the steeplechase because of the pandemic, Updike planned to run at three meets this spring in pursuit of the Olympic standard -- meets in Eugene and Kansas City and then the Mt. Sac Relays in California.

He figured it would take two or three races to hit the 8:22 standard. It took one.

“Things clicked,” he said. “I ran faster than I had assumed and -- that would have been something I thought I would have done three weeks later. Normally it doesn’t happen like that.

“... The idea was Eugene will be the rust-buster, Kansas City should be a good opportunity to have another race shortly after the first one and Mt. SAC was gonna be the fast one. Then everything got thrown out the window.”

Instead of going to Kansas City or California, he went back to his training base in New York and got vaccinated. Not long after that he temporarily relocated to Flagstaff, Arizona, for a couple of weeks of altitude training before the Olympic Trials.

Skipping the Kansas City and California meets was an easy choice, Updike said. Steeplechase is a risky event and there’s no need to run a lot of them, he said. And, it helped him save money -- a significant consideration for a runner who is a legit Olympic contender but has no major sponsors.

Updike is a former member of the New Jersey-New York Track Club based in New York’s Westchester County. The club was sponsored by HOKA One One until the running shoe company ended its sponsorship at the end of 2020.

Two of the team’s coaches, Tom Nohilly and John Trautmann, broke away and formed their own club, the Empire Elite Track Club, and Updike went with them, largely because Nohilly is a former steeplechaser himself.

The new club doesn’t have a sponsor, and Hoka didn’t renew its personal sponsorship of Updike when their deal expired earlier this season -- prior to Updike’s breakthrough race in April.

“And so currently the team nor I have sponsorship,” Updike said, although he has added Xendurance Supplements as a sponsor.

Updike has worked a variety of jobs since graduating from Eastern Oregon University in 2015, including a stint with Dick’s Sporting Goods back in 2016, when he placed 12th in the U.S. Olympic Trials finals.

These days he has a couple of roommates, which helps with living expenses in pricey Westchester County, a place he lives because that’s where his coaches are.

He spent the winter teaching and coaching at The Masters, a private middle school and high school in Dobbs Ferry, “and I saved a bunch of money so now I just am able to have the freedom not to work.”

He spends his days running and resting. “If I’m not running, I’m not doing anything,” he said. “I’m either hyper-active, or not.”

When Updike returns to the Hayward Field track on Monday, he’ll do so with confidence born from his fast race at the same track in April.

“Running 8:17 and closing the way I did makes everything feel a lot more real,” he said. “I will be a threat for a spot.”