Running 90K at 90 degrees south: For this Alaskan at the South Pole, the subzero cold was ‘deeply familiar’ 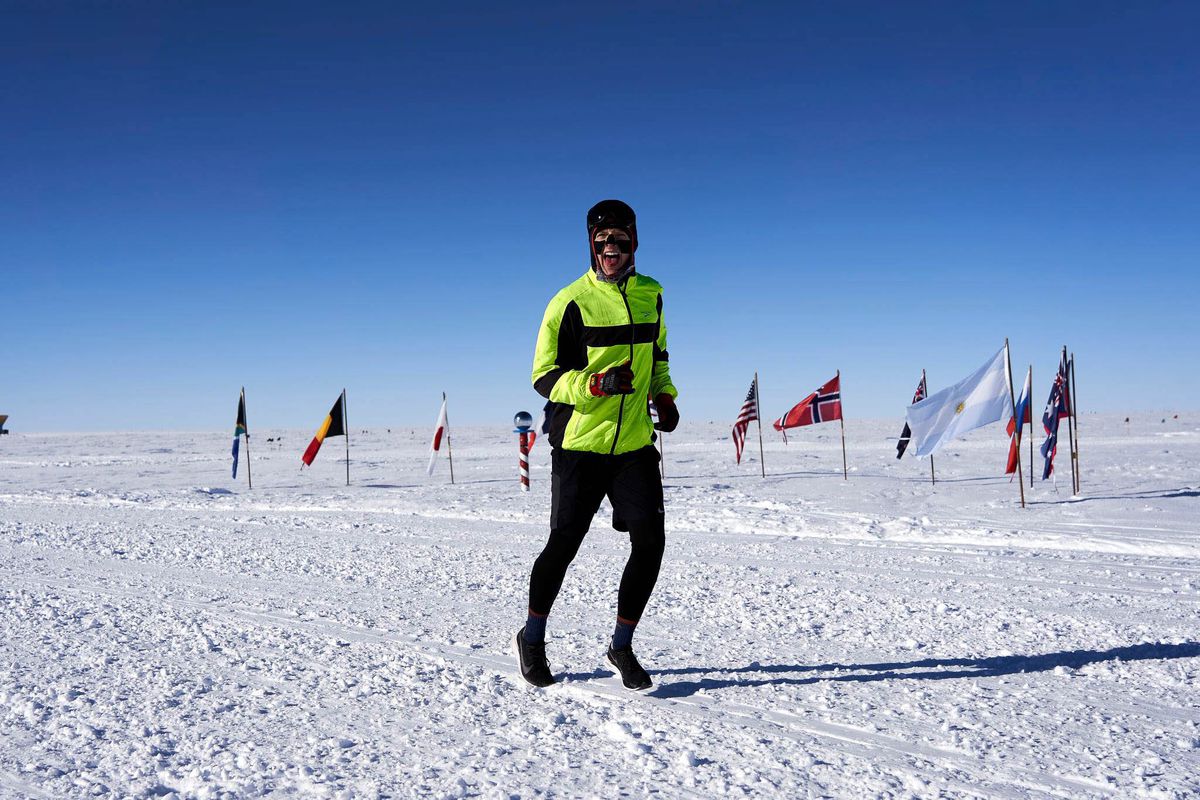 Craig Updegrove of Bethel runs past the flags that mark the ceremonial South Pole during his 90-kilometer run in January. (Courtesy Geoffrey Chen)

Craig Updegrove of Bethel runs past the flags that mark the ceremonial South Pole during his 90-kilometer run in January. (Courtesy Geoffrey Chen)

Craig Updegrove is 37 and grew up in Bethel. He was a member of the high school cross country team there, and he has a running story he thinks might spark some hometown pride and inspire the current generation of Warriors.

It’s the story of a man from near the top of the world who works at the bottom of the world, where he ran through all of the world’s longitudinal lines eight times. In less than 14 hours.

Updegrove ran his third marathon at the South Pole research center in January, but this time he didn’t stop after 26.2 miles. He kept going until he had run 90 kilometers at 90 degrees south, the southernmost spot on the planet.

An editor at the Antarctic Sun said the online newspaper doesn’t keep records of continental runs, but the South Pole Telescope said in a tweet that Updegrove’s 90K was “definitely a record outdoor run for the South Pole.”

Because Updegrove has spent most of his life in subarctic Alaska, the polar conditions during his 56-mile run didn’t seem all that bad.

At the start, it was minus-17 with a little wind. When it ended 13 hours, 24 minutes and 5 seconds later, the wind had picked up for a windchill temperature of minus-35.

“I would walk to school in temperatures similar to this, so the conditions had a deeply familiar sting,” he said in a recent email conversation.

Updegrove is a contract worker at the Amundsen-Scott South Pole Station, a U.S. research center that puts on an annual marathon for workers stationed there.

This year’s race was Jan. 10 — midsummer at the South Pole and a time of constant daylight, but the sun never rises high in the sky. On race day, it hovered about 22 degrees above the horizon, Updegrove said.

“It was neat to notice my shadow shift around me like a sundial as the day went on,” he said.

The race begins and ends at the Ceremonial South Pole, a place marked by flags of the 12 nations that signed the 1959 Antarctic Treaty. It runs on a 6.55-mile loop that circles the geographic South Pole, where all of the world’s lines of longitude meet.

“I didn’t set out that morning to break any records,” Updegrove said. “I knew that at 37 I wasn’t going to be the fastest runner, so aiming for first place wasn’t realistic. I was just hoping to try for an ultrarun of 32.75 miles in order to do something different from the last two South Pole Marathons I ran.”

Four laps equal a marathon and five equal the ultrarun Updegrove had in mind, but after five trips around the bottom of the world, the guy who placed 62nd at Alaska’s Class 1-2-3A state cross country championships was ready for more.

“So I ran around the world 8 times and then finished the final few miles (running) back and forth between the ceremonial pole and the South Pole Telescope,” he said.

“The worst part of the race was when my 13-year-old iPod nano froze on the third loop,” he said. “Luckily, I was able to hand it off to a volunteer who took it inside and strapped two hand warmers to it. I picked (it) up on the next pass and was able to get another 7 hours of music out of it.”

He’s headed back to the South Pole this month for another stint.

Updegrove said he didn’t run much after graduating from Bethel High School. He attended art school and settled in Anchorage, where he spent about a dozen years working as a sculptor, a freelance graphic artist and an art director.

“Everything changed when I was in a hit-and-run accident,” he said. “The injury wasn’t too major, but it put me on bedrest for about a week and the residual pains stayed with me for months along with the gnawing thought of, ‘what if it had been worse?’

“I began to obsess about traveling and changing my life.”

In 2015 he applied for work in Antarctica, got it, and has been going there ever since.

When Updegrove is “off the ice,” he spends his time hiking and biking the rest of the world and working seasonal jobs. He’s trekked through the Himalayas, New Zealand and the high desert of Utah, and last week he was “suffering in the heat” in the Pacific Northwest and preparing to return to Antarctica.

“Looking forward to the freezing temps,” he said.

Antarctica is the coldest place on Earth. Updegrove said he organized a 10K last year on the September Equinox, the only day there’s a sunrise at the South Pole. It was minus-77, he said, “but the long drawn-out sunrise was stunning to witness after a winter of darkness and made suffering through the biting cold worth it.”

[Lydia Jacoby’s journey to the Olympics started with a breakout performance at age 10. The pandemic helped the Seward teen swimmer train even harder.]

There’s nearly 2 miles of ice under the Amundsen-Scott station, giving it an elevation of 9,301 feet, Updegrove said, and low air pressure increases the physiological altitude an additional 1,000 to 2,000 feet from day to day.

For his 90K, Updegrove wore category 4 glacial goggles to guard against the sun and bright snow, which he said can be brutal to the eyes. He used athletic tape to cover the parts of his face most exposed to the sun and cold and put sunscreen everywhere else, and still wound up with a sunburned nose.

The 90K was the byproduct of 16 straight months at the South Pole. Before 2020-21, Updegrove had only spent summers there. He got through his first long, dark, cold winter by spending entire Sundays in the gym, running, biking and rowing.

“There was a hamster-in-a-cage effect that hit me pretty hard around midwinter,” he said. “The South Pole is among the most remote and coldest places on earth during the winter with no flights over the winter months, so I figured I might as well spin the wheels in the gym since I wasn’t going anywhere anytime soon.

“I would burn through a TV series or a stack of movies throughout a day’s session. The entire first season of Stranger Things got me through my first ultra treadmill run of 32 miles. A few of us put on a Walk to Mordor event where we walked/biked/rowed our way through all three extended director’s cut versions of ‘The Lord of the Rings’ trilogy in a single day. I would not recommend this.”

Those who stay through the winter set up physical challenges to keep each other active, he said. There’s the Race to McMurdo (835 miles on a treadmill, representing the distance from the South Pole to McMurdo), the Lift to McMurdo (the total weight brought to the South Pole by LC-130 cargo planes the previous summer, or 1,746,771 pounds), and the Everest Beer Can Challenge.

“The Beer Can is what we call the large cylindrical steel shell that descends five stories from the elevated station to the sub-snow surface, which connects to several buried arched warehouses,” Updegrove said. “I worked in these warehouses all winter and went up and down those stairs enough times to have easily summited Everest twice over.”

It all added up to 90 kilometers at 90 degrees south.

Updegrove has never run a marathon outside Antarctica, and he doesn’t envision a northern version of his feat. Running at the North Pole would be amazing, he said, but he doesn’t think he’ll ever have the money or work opportunity to make it happen.

“I once ate at a great Asian buffet restaurant in North Pole, Alaska,” he said. “That is probably the closest I will get.”