A swimmer and a rugby player will represent Alaska at the Tokyo Olympics, and both have medal aspirations 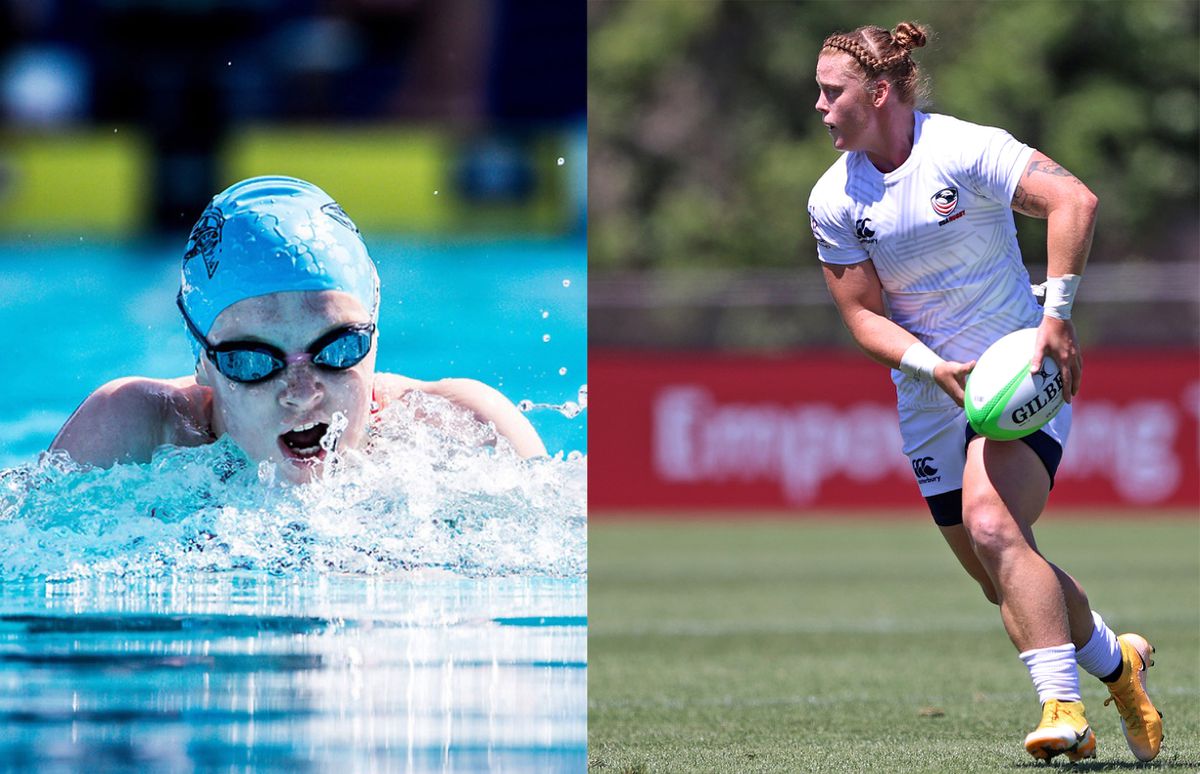 The “faster, higher, stronger” motto puts excellence in sport at the forefront of the Olympics, but anyone who follows the games knows a good backstory can put an athlete in the spotlight as easily as a perfect 10 on the vault or a world record on the track.

And so for all of those athletes whose bios include a version of “she was raised in a one-stoplight town,” we give you Lydia Jacoby of Seward.

Where the nearest stoplight is some 90 miles away in Soldotna.

For those whose bios detail a transition from one sport to another, we give you Alev Kelter of Eagle River, who achieved success in two NCAA Division I sports — soccer and ice hockey — before she ever scored a try in rugby.

Those are the backstories for the two Alaskans competing in the 2020 Summer Olympics in Tokyo.

Both of them — Jacoby, 17, and Kelter, 30 — are in position to add to their storylines in a big way during the coming days, because both are medal contenders.

Jacoby, who still has another year of high school left, is the No. 2-ranked swimmer in the world in the women’s 100-meter breaststroke. She appears on just about every list of predicted medal winners.

[Lydia Jacoby’s journey to the Olympics started with a breakout performance at age 10. The pandemic helped her train even harder.]

Kelter is a two-time Olympian and Chugiak High graduate now based in San Diego, where she’s been a member of the USA Rugby women’s sevens team for several years. The Associated Press predicts a bronze medal for Kelter and her teammates, who were ranked second at the end of the 2019 season and fifth after the pandemic-disrupted 2020 season.

A third athlete with Alaska ties is also in Tokyo — Sagen Maddalena, a four-time NCAA All-American for the University of Alaska Fairbanks riflery team from 2014-18. Now a member of the U.S. Army, she’ll compete in the women’s 50-meter smallbore event.

Basketball player Sue Bird and baseball player Eddy Alvarez will be the flag carriers for Team USA at the ceremonies. They were chosen by a vote of athletes.

Every sport got to nominate a man and a woman to carry the flag, and Kelter was the candidate for women’s rugby.

“It was definitely an honor to be chosen,” Kelter said earlier this week from Japan. It was an honor that came with a homework assignment — either a two-minute video or a one-page essay saying why they should be selected. Kelter said she went with the written word, calling it “more my style.”

Kelter and her teammates play their first match in the 12-team women’s tournament on Wednesday, July 28, at 5 p.m. ADT. The Americans are in a pool with Australia, China and Japan, and how they fare in pool play will determine if they make it to the knockout round.

“It’s going to be anybody’s game after this year off,” Kelter said. “It will come down to who plays with the most team chemistry and who plays hardest on that given day. For us, our focus is on ourselves. We’re focused on generating that composure, that togetherness, that lightheartedness, and bringing it all together in a mosaic of hard work and discipline.”

Kelter is one of two players back from the 2016 team that placed fifth at the Rio Olympics. She’s one of the team’s leading scorers and its most physical player. She has made 33 World Rugby Seven Series match appearances, the most by anyone on the team.

These next couple of weeks are a business trip for her.

“I’ve had this conversation with everyone on the team: You don’t want to be just an Olympian; you want to be an Olympic medal winner,” she said.

As an Olympic veteran, Kelter hopes to share her experience from five years ago with this year’s rookies. Her chief message: Embrace the chaos, don’t fight it.

“You can’t control the bus schedule or the quarantines or the spit tests,” she said. “Everything around you is a little more crazy — you’re not driving home at the end of practice and surfing in the afternoon or having chill coffee dates.”

Jacoby’s first race is early Sunday morning during a session that starts at 3 a.m., and parts of Alaska will either stay up late or get up early to watch.

Jacoby — the first Alaskan to make the U.S. Olympic team — is scheduled to swim the preliminaries of the 100-meter breaststroke early Sunday morning in a session that starts at 2:59 a.m. ADT. The semifinals are less than 15 hours later at 5:50 p.m. ADT, and the finals are Monday at 6:17 p.m. ADT.

The big watch party in Seward will be at the Alaska Railroad terminal, although Jacoby’s mother, Leslie, said several watch parties are planned.

Leslie and Rich Jacoby won’t be at any of them, though, because they’ll be in Orlando, Florida, for a watch party hosted by NBC and the U.S. Olympic and Paralympic Committee. They’ll be there for four days.

Athletes have access to a 24-hour cafeteria with all kinds of food, “and it’s one of few places where they interact with other athletes from all over the world,” Leslie Jacoby said.

Everyone wears masks and there are dividers throughout the cafeteria to keep groups separated. “They’re being really COVID careful,” she said.

Already, some athletes have been sent home after testing positive for COVID-19, and officials recently decided no fans can attend events.

For Kelter, that decision came as no surprise.

“You have to be honest — a year ago you had to be thinking that,” she said. “I’m just blessed to be on the field. ... You don’t need the stands to be filled to be the best version of yourself.”