Alaska’s boys of summer are back on the diamond 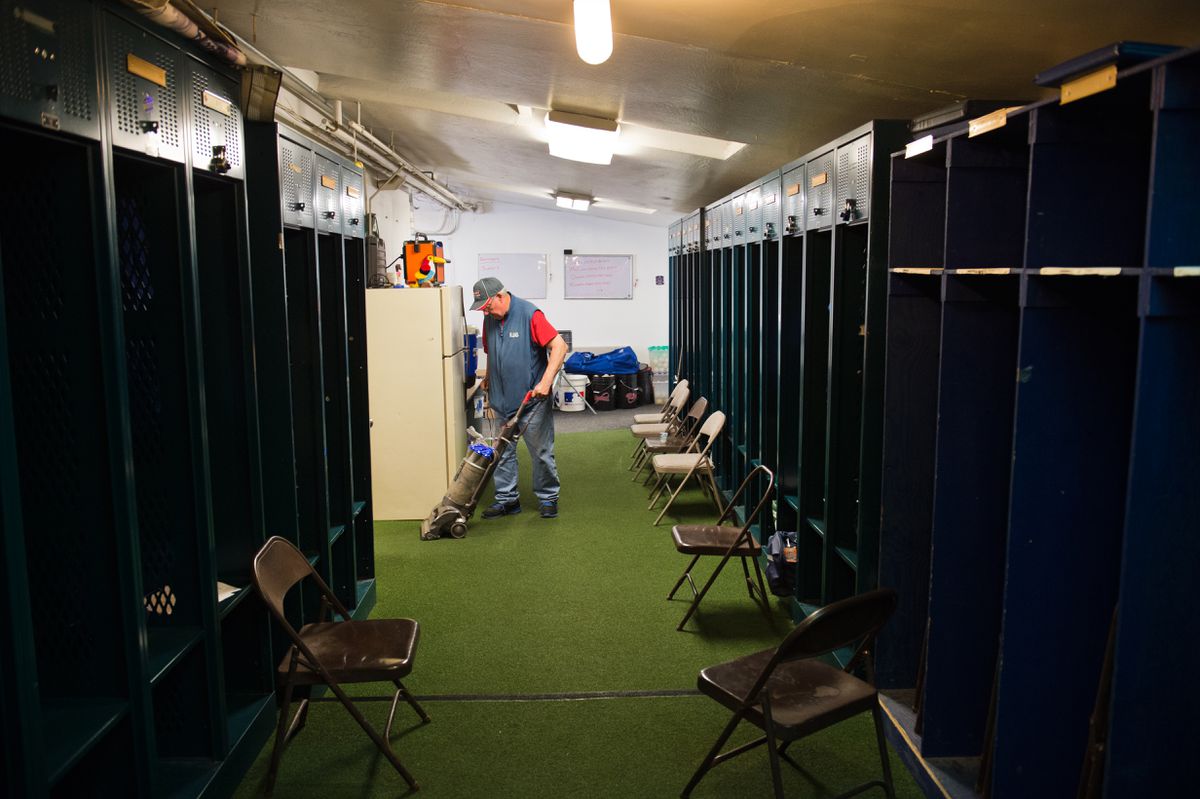 Bob Barger vacuums the Anchorage Glacier Pilots clubhouse on Monday, a day before the Alaska Baseball League season begins. Barger will begin his 19th season as the broadcast voice of the Glacier Pilots this week. Meeting the players is one of the things that keeps him coming back, he said. “I love the kids,” he said. Barger said 17 of the team’s 26 college players will be in Anchorage in time for opening day Tuesday, he said. (Marc Lester / ADN)

Bob Barger vacuums the Anchorage Glacier Pilots clubhouse on Monday, a day before the Alaska Baseball League season begins. Barger will begin his 19th season as the broadcast voice of the Glacier Pilots this week. Meeting the players is one of the things that keeps him coming back, he said. “I love the kids,” he said. Barger said 17 of the team’s 26 college players will be in Anchorage in time for opening day Tuesday, he said. (Marc Lester / ADN)

"I didn't even know there was baseball up here," he said Sunday afternoon at Mulcahy Stadium, where he and a few other Pilots helped get the park ready for Tuesday's opening-night game against the Chugiak Chinooks.

Google searches educated him about Alaska and taught him about some of the former Alaska Baseball League players who went on to make it big.

And conversations with Wichita State coaches assured him there are worse ways for a ballplayer to spend the summer than playing in the long shadows at Mulcahy, where stadium lights are barely needed on a sunny June evening.

Todd Butler, the head coach at Wichita State and a Pilots assistant coach in 1992, gave the ABL a good review.

"(He) said his favorite summer was up here," Kocis said.

"He talked to me about how cool it was up here," Kocis said of the man who was the Pilots manager back in 1979.

Kocis, a freshman from Omaha, Nebraska, hasn't been disappointed so far, beginning with his flight to Anchorage. As Friday night turned to Saturday morning, he marveled at how the sky grew lighter and lighter the farther north he traveled.

Kocis took batting practice Sunday morning at Mulcahy and was put to work later in the day hanging up decorative tarps that display photos of Glacier Pilots who made it to the major leagues.

He got a pleasant surprise — and something new for the scouting report — when he saw a picture of  former Wichita State pitcher Mike Pelfrey. Pelfrey, who played for the Pilots in 2003, retired last year after a 12-year pro career that included seven seasons with the New York Mets.

Each summer, players from colleges all across the country come to the five-team ABL to play an eight-week season. The league started in 1974 and boasts a long list of alumni who made it to the major leagues. James Paxton, who threw a no-hitter for the Seattle Mariners earlier this season, was a 2008 Glacier Pilot, and New York Yankees slugger Aaron Judge played for the Pilots in 2011. Paul Goldschmidt, a 2008 Anchorage Bucs player, is a five-time all-star for the Arizona Diamondbacks.

Here's a brief scouting report on the upcoming season:

Vandals struck Seymour Memorial Park in Kenai last week, swiping $700 worth of tools out of a shed and cutting the gasline of the Honda side-by-side used to drag the infield and perform myriad other tasks at the park.

But the show will go on, said general manager Tory Smith. The Oilers will open their season Thursday with the first of five straight games with the Bucs.

"We're a non-profit and we don't have a huge cash flow," Smith said, "but we're really lucky that we've got a lot of support from the community."

A GoFundMe account started by a fan has raised more than $800 to help replace or repair what was stolen or damaged. The side-by-side is still in the shop, Smith said, but another fan has loaned the team a 4-wheeler to use in the interim.

For the first time in decades, the Alaska Baseball League has a commissioner – Jim Posey, a longtime Alaskan who retired from his job as general manager of Municipal Light & Power in 2013.

For the last several years, general managers have taken turns serving as the league president and make decisions usually made by a commissioner. Protests were resolved, punishments were administered and policies were interpreted by GM with potential conflicts of interest.

"We were long overdue to get someone in that position," Glacier Pilots board member Jon Dyson said.

Who’s in the dugout?

Two of the league's five teams have new field managers this year.

The only real newcomer is Guido Aspeitia, who takes over as the Pilots head coach. He spent the 1990s at Cal State-Fullerton and has coached in numerous summer leagues.

In Kenai, Kyle Brown was promoted from pitching coach to head coach. He replaces a college baseball icon – Jim Dietz, the retired San Diego State coach who spent 18 summers in Alaska, a span that started in 1970 with the first of many seasons with the Fairbanks Goldpanners and ended last season with the Oilers.

This summer is the first since his Little League days that Dietz hasn't been part of a baseball team, the San Diego Union Tribune reported recently.

Ken Hokuf returns as the Anchorage Bucs field manager, Jon Groth returns in Chugiak and Ben Taylor is back for a sixth season with the Miners. Taylor is the winningest coach in Mat-Su history and has guided the Miners to the last two ABL titles.

The ABL will again play without one of its founding members, the Fairbanks Goldpanners.

The Goldpanners, who date back to 1960, are Alaska's first  and most storied baseball team. In 2016, they left the league to play an independent schedule and end the season at the National Baseball Congress World Series in Wichita, which begins before the ABL season ends.

Last winter, they asked to rejoin the league. The five existing league members all said no.

Dyson said it would be nice to have a six-team league again because it makes it easier to play a balanced schedule. But Fairbanks is by far the most distant destination for every ABL team and putting it back to mix would add significant travel expenses for teams at a time when Alaska's economy is weak.

This summer, the Goldpanners will play two games against ABL teams. They'll visit the Chinooks on July 26 and the Miners on July 27.

The rest of their opponents are West Coast teams like the San Francisco Seals and Seattle Studs. All of their home games are against California teams, including the annual Midnight Sun game on June 21, when the Goldpanners will play the Orange County Surf.