Alaska’s ballparks: At Mulcahy Stadium, the fans keep the game together 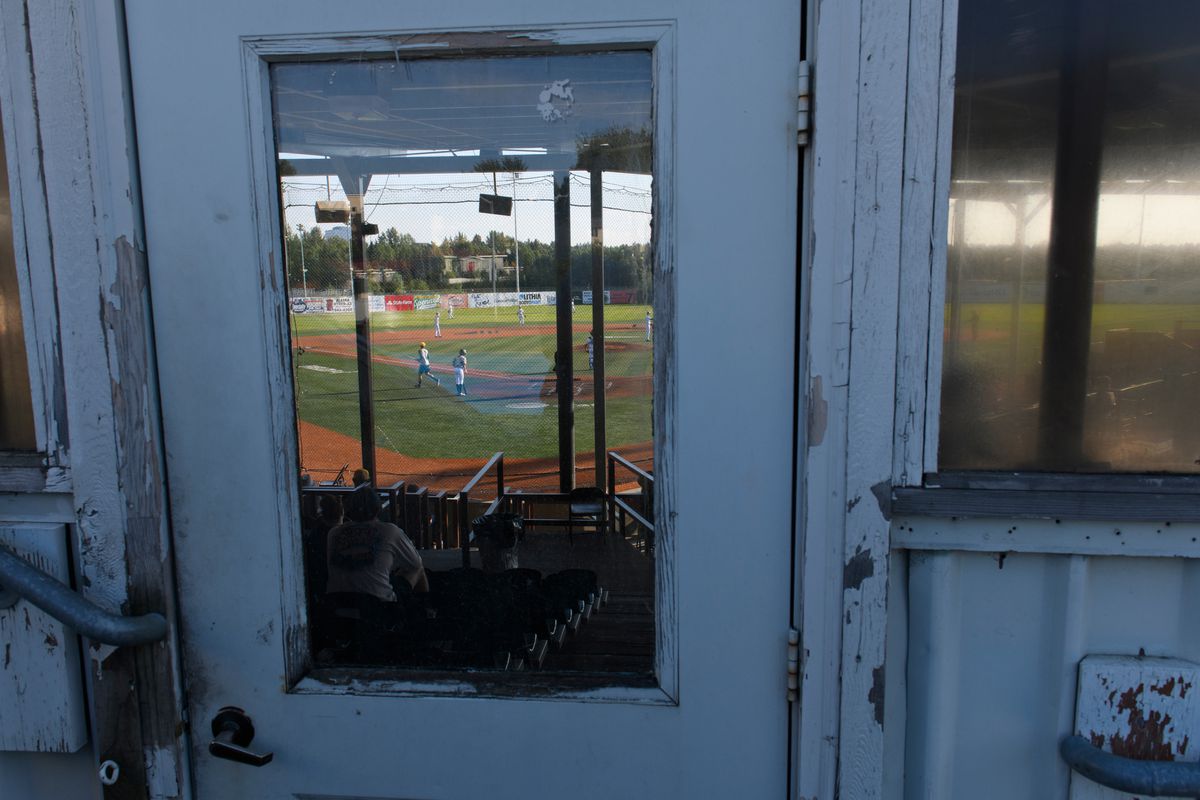 A door leads to the grandstands at Mulcahy Stadium. (Marc Lester / ADN)

A door leads to the grandstands at Mulcahy Stadium. (Marc Lester / ADN)

First in a series about Alaska Baseball League ballparks

For 55 years, Mulcahy Stadium has been Alaska’s home for America’s pastime.

A ticket to the ballpark starts at $5 for an evening of amateur collegiate baseball. This is a general admission ticket, and if you’re early enough, you’ll be able to sit on benches directly behind home plate.

For two more dollars, fans can sit in the modern new box seats along the first and third baselines.

For another $5 at an Anchorage Glacier Pilots game, you can get a “Pilot dog,” a delicious oversized Polish hot dog, and $6 more pays for a cold Alaska draft beer.

For a grand total of $16, you can get a seat a few rows behind home plate, with a ballpark classic in each hand.

At Tacoma’s Cheney Stadium, home to the Seattle Mariners triple-A team the Rainiers, it costs $14 to get in the gate. With no beer and no Pilot dog.

But good seats and cheap tickets do come with other costs.

Mulcahy Stadium looks and feels like a broken-in mitt, trimmed with new lacing around an unforgiving palm. A large patch of the grass in center field is damaged from standing water, signs of the hard Alaska seasons. Fans sitting in the box seats, unprotected by a net, are dangerously close to foul balls and splinters from broken bats, and the public address speakers hanging above them crackle in and out during announcements.

The box seats are the most recent addition to a patchwork of improvements that have kept the ballpark going. In the last decade, a beer patio and infield turf have contributed to the player and fan experience during relentless use during the Alaska Baseball League, American Legion and high school baseball seasons.

Announcing at a recent Pilots game from the press box high above home plate was former Pilots player Jon Dyson. During his nearly lifelong residency at Mulcahy Stadium, Dyson has filled nearly every role a ballpark can offer, from infielder to general manager. He’s currently on the board of directors.

“I think ultimately it would be due for a face lift or a new ballpark," Dyson said between introductions of batters and relief pitchers.

Renovations like a kids play area and netting to protect fans would help with the overall experience at Mulcahy, he added.

Dyson acknowledged this would be a big change for Anchorage. There are ways to keep some of the characteristics of the current park, he said, like preserving the turf and including a beer patio in any new designs. Replacing Mulcahy would invite “new generations of fans to start making their own memories at a new ballpark," he said.

A young fan already making memories at Mulcahy is George Gallagher. He’s 14 months old and the son of Moira and Gregory Gallagher. The young family sat near home plate and took turns entertaining George while watching a Pilots game earlier this season. Moira calls the ballpark a “community treasure.”

Gallagher said she’s pretty attached to the entire Chester Creek Sports Complex, not just because of fond memories of her own, but by name. Nearby Sullivan Arena is named after her late grandfather and former Anchorage mayor, George Sullivan.

Like Dyson, Gallagher thinks improvements to the ballpark need to be made, investments that could attract more people to the game, she said.

At the beginning of the game that Dyson announced, the public address system above the first-base line cut out halfway through the national anthem. But no bursting bombs or rockets’ red glare were missed, as a singing choir of patriotic Pilots fans gave proof that the fans were still there.

Capacity: About 4,500 (more with standing room)

Named for: Bill Mulcahy, an Alaska Railroad auditor and baseball fan who put together an Anchorage baseball team in the early 1920s to play in the Midnight Sun Classic in Fairbanks and later helped bring Little League baseball to Anchorage. He died in 1965.

(From July 25-30, Mulcahy Stadium will be home to the American Legion state baseball tournament)