Alaska’s ballparks: At Chugiak’s Lee Jordan Field, you can sit in the bleachers or on the grass 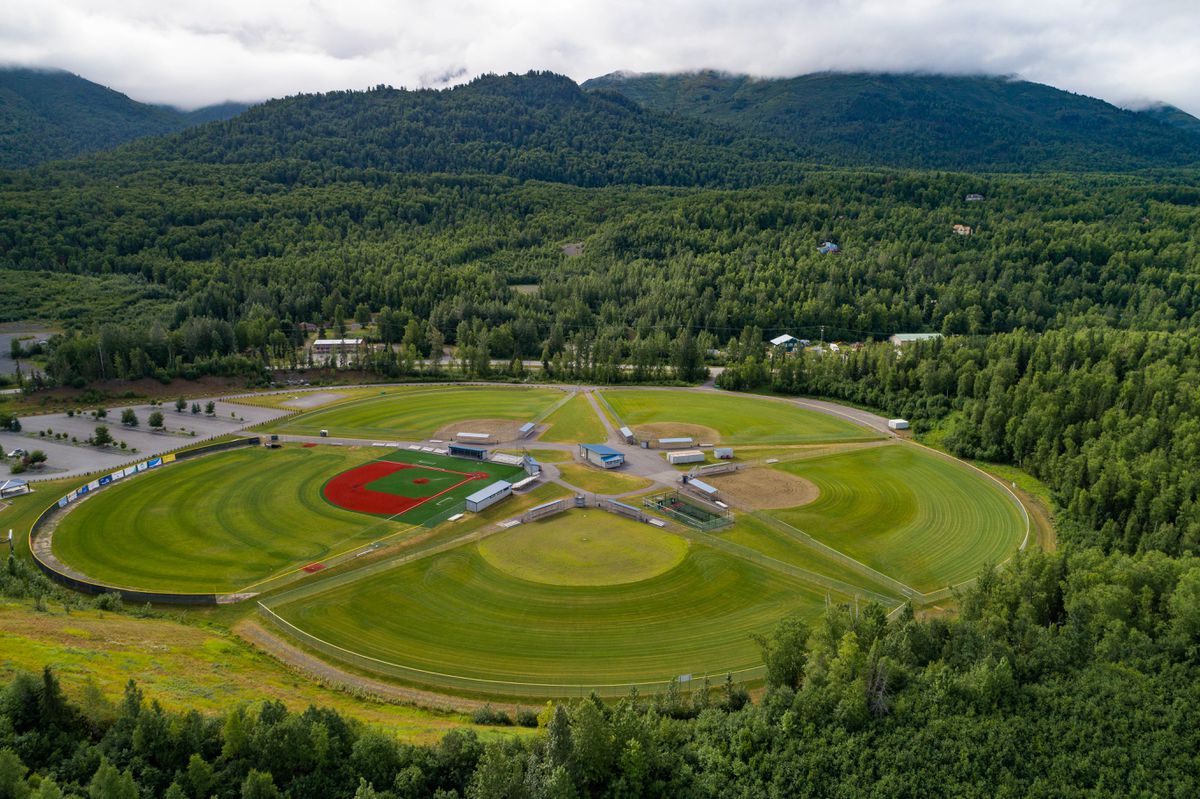 (Last in a series on Alaska Baseball League ballparks)

The desire to get a souvenir baseball is a common denominator for just about anyone who attends a game. A baseball is a coveted prize for most youngsters, and catching a foul ball or a home run ball has a way of making adults downright giddy.

Head out with the family to an Alaska Baseball League game at Chugiak’s Lee Jordan Field on the right night, and your kids could head home happy with a memento covered in cowhide.

Fans enter games free of charge for every game, and at two games this season — the first was June 30, the next is July 31 — a ball is tossed to every kid who comes to the park.

The balls are foul balls that land in adjacent fields at the Loretta French Sports Complex. Boosters collect them and save them until the give-away nights.

“The kids light up," said Tim Barto, president of the Chugiak-Eagle River Chinooks booster club. “It’s funny what a foul ball can do.”

By giving them free baseballs a couple of times each season, kids are less tempted to climb the fences between Lee Jordan Field and the adjacent fields, said Bill Stoltze, the vice president of the booster club.

It’s safe to say the promotion is one of the things that makes Jordan Field a welcoming place to kick back for a few hours with your family and enjoy the game of baseball.

“One of the dynamics we wanted to have here is making for a good family experience,” Stoltze said.

Jordan Field is named for Lee Jordan, a community booster instrumental in bringing the Chinooks and the Alaska Baseball League to Chugiak-Eagle River in 2012. It’s the youngest of the ABL’s diamond gems.

Jordan Field has concession stands but no beer sales. The infield features an artificial playing surface that gives off a bright, almost-new look. The natural-grass outfield is more than playable but is without an irrigation system. Of late, the record-high temperatures and complete lack of precipitation have turned the grass yellow-brown.

The teams don’t occupy dugouts, per se. The bench areas look like small buildings covered by chain link. At a recent game against the Anchorage Bucs, players on the home team came to the plate accompanied by their own walk-up music, with country and hip-hop dominating.

Grandstands are available on the first-base and third-base sides of home plate. Smaller bleachers stretch out past each of the single-level covered benches along each baseline.

Fans also bring along chairs or blankets and find other spots to sit, often on a large, unnamed hill beyond the left-field fence. A man and his dog sat under a canopy about a quarter of the way up the hill at a recent game.

“It’s not the Green Monster, but it’s something like that,” Stoltze said.

In just a few years Jordan Field has carved a niche as a special place.

“Each ABL park is beautiful in its own way,” Stoltze said. “And I’m sure Lee Jordan would be proud of what we’re doing.”

Built: Improvements were made at the existing municipal park from 2012-14 to add bleachers, an artificial turf infield and concession stands.

Capacity: Unknown. The park has bleachers and standing room for approximately 600 people, but spectators can stand and watch from anywhere, including a 100-foot hill overlooking left field.

Named for: Lee Jordan, the former Chugiak-Eagle River Star editor and a longtime supporter of youth sports in the area. He was instrumental in helping bring the former Athletes in Action Fire to Chugiak in 2012 and was the team’s first booster club president. He died on Dec. 31, 2018.