On a gray day at state baseball tournament, a West pitcher shines with 16 strikeouts 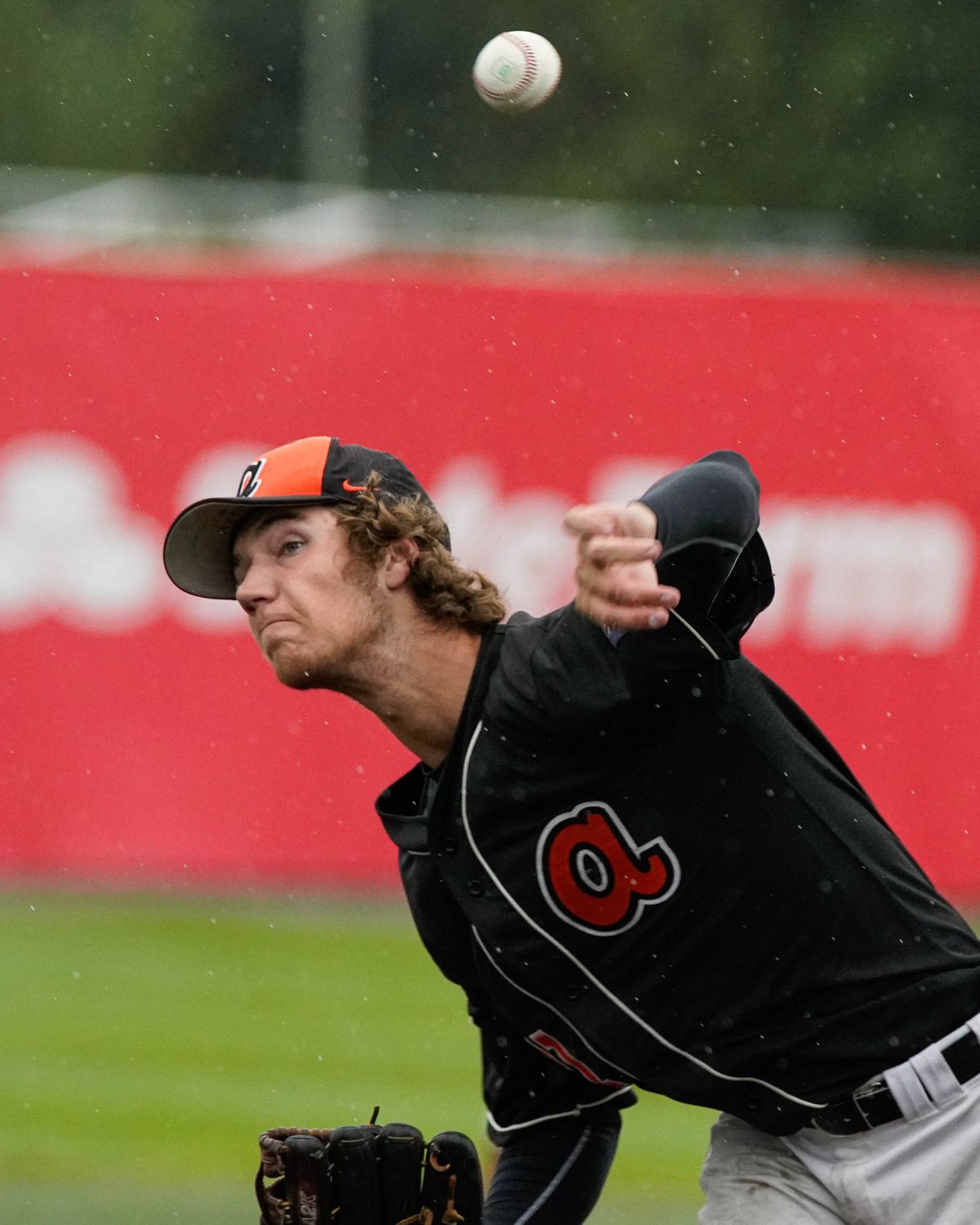 The first day of the Alliance Baseball League state tournament began with a brilliant performance by West Eagles pitcher Leland Wilson and ended with a dramatic victory for Wasilla at Mulcahy Stadium on Friday.

Wilson, a lefthander headed to Texas Tech, struck out 16 batters and gave up two hits in seven innings to lead West past defending state champion Juneau 3-0.

In other games on the gray and sometimes rainy day, Wasilla toppled top-seeded Dimond 2-0, South squeaked past Chugiak 7-6 and Eagle River upended Kenai 5-1.

Wilson fanned seven in the first three innings and struck out the side in the seventh and final inning. He was five shy of matching the tournament record of 21 strikeouts, recorded by Kenai’s Marshall Boze in a nine-inning game in 1988.

Three pitchers combined for a three-hitter for Juneau, but West took advantage of three walks and two hit batsmen.

West third baseman Quinn Bates-Janigo earned two RBIs without registering a hit — he drew a bases-loaded walk in the fourth inning, and his groundout scored Shawn Jones from third base in the fifth inning. Jones, who put himself in scoring position by stealing two bases after getting hit by a pitch, beat the throw home on Juneau’s double-play attempt.

Juneau starter Garrett Bryant gave up one hit and struck out seven before retiring after four innings. With two out in the seventh inning, the Midnight Sun had two runners on base and the potential tying run at the plate only to see their hopes foiled by WIlson’s final strikeout.

Wasilla pulled off the day’s only upset behind star performances from Jacob Gilbert and Nolan Murphy.

The game was a showdown between teams that boast the best overall records in the tournament -- Dimond is 20-5, Wasilla is 19-5. Dimond is the tournament’s top seed based on an 8-2 league record. Wasilla was 6-4 in league play and is the fifth seed.

Gilbert struck out 13 and gave up two hits in 6.67 shutout innings for Wasilla. He struck out five in the first two innings and when he ran into trouble in the third -- Dimond loaded the bases with two out -- he ended the threat with his sixth strikeout.

Dimond twice put its leadoff batter on base, but both times the baserunners were wasted -- one was picked off, another was caught stealing.

In South’s 7-6 win over Chugiak, four South pitchers issued 14 walks but Chugiak was hurt by two errors and a lack of timely hitting.

The Mustangs left 14 runners on base, including three in the sixth inning and two in the seventh.

South relief pitcher Reid Brock entered with one out and the bases loaded in the sixth and got the Wolverines out of trouble with a strikeout and a fly ball to the outfield. In the seventh, he walked two and gave up a sacrifice bunt that put the runners at second and third, but escaped by striking out the final two batters.

South pounced on Chugiak pitchers Riley Fugere and Zach Cole for a six-run first inning. The Wolverines scored two runs on two hits, two hit batsmen and a walk to chase Fugere with the bases loaded, and then touched Cole for a walk and two hits, one of them an RBI single by Brandt Hultberg and the other a two-run single by Grant Heikkila.

Chugiak came back with five runs on five hits in the fourth inning, including a double by Hunter Rau and a two-run single by Micah Cassezza.

In Eagle River’s 5-1 win over Kenai, the Wolves capitalized on three errors, two of which allowed runs to score. Their big inning came in the fifth, when they scored three runs, two of them on a double by Orazio Ramos.

Josh Thompson was 3 for 3 and scored twice for Eagle River. In the fifth inning, he moved from left field to the pitching mound, where he survived a couple of scares to pick up the victory.

With the game tied 1-1 with two out in the top of the fifth, Moses Hayes was hit by a pitch to give Kenai a baserunner and prompt a pitching change. Sam Berry worked Thompson for a walk during an at-bat that saw Hayes steal second and advance to third on a wild pitch. A double by Tanner Ussing drove in Hayes, but Berry was thrown out at the plate while trying to score from first base.

Eagle River made it 4-1 in the bottom of the fifth and added another run in the sixth.

In the seventh, Hayes and Berry were on the corners again with two out and Ussing at the plate, but this time Thompson prevailed, getting the final out on a fly ball to center field.

The eight-team tournament runs through Wednesday at Mulcahy Stadium.