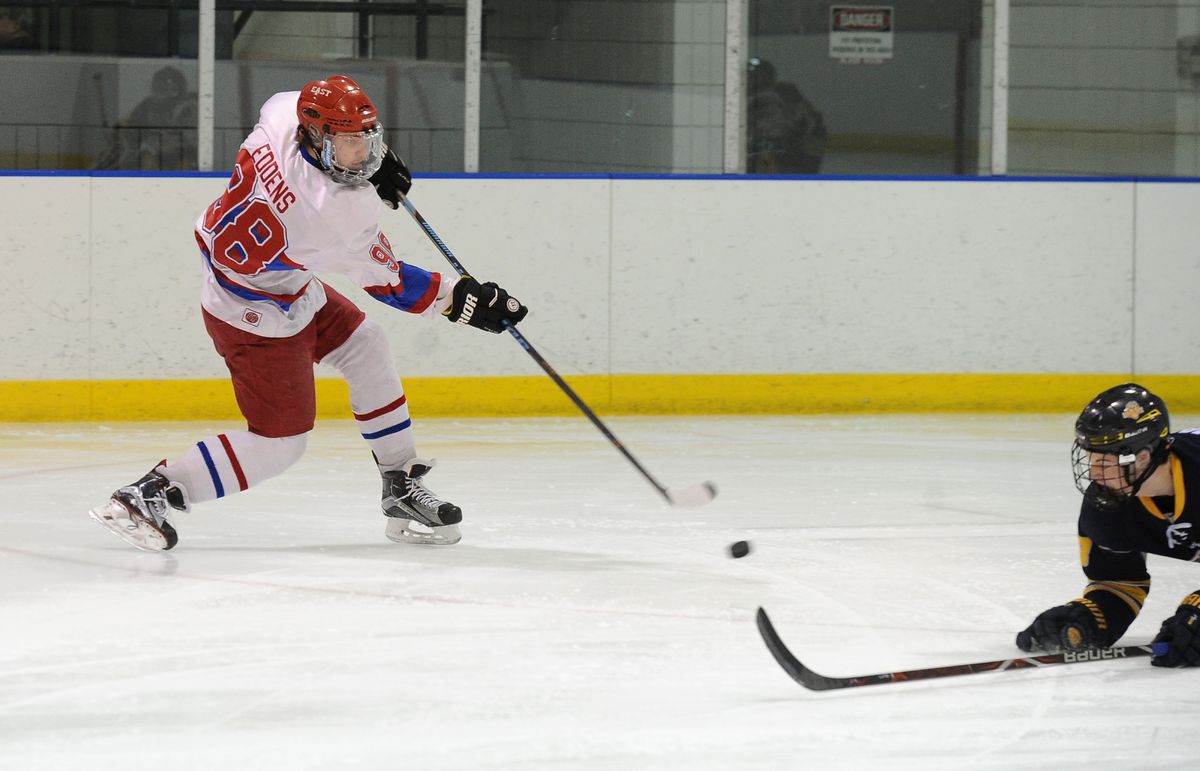 Whether he's racking up goals or distributing assists, Nick Eddens does a little bit of everything for the East hockey team.

A senior forward, Eddens scored his 100th point for the T-birds last month and is a big reason why East won its first Cook Inlet Conference game before the Christmas break against Bartlett — a game in which he had a hand in all eight East goals.

Often, the best high school hockey players in Alaska end up going out of state for junior hockey or are on deeper teams and never reach the 100-point mark, said first-year East coach Zach Gieszler.

"The point thing is just a result of him playing within his role," Gieszler said. "He knows that and he knows when he's not on, his team isn't on."

Eddens is always looking for chances to score, even in practice. Service forward Nick Austin, who is good friends with Eddens and played five years of comp hockey with him, said the two would used to make bets in practice to see who could score the most goals.

The loser would often have to buy the other lunch.

"It was pretty back and forth, but when he would win, he would destroy," Austin said. "He probably has the best shot in the league. He can score from pretty much anywhere."

Eddens was "on" in East's win over the Golden Bears on Dec. 21 — East's last game before the Christmas break.

After scoring the first goal of the game, Eddens was sent to the penalty box with a five-minute major and 10-minute misconduct for checking a Bartlett player from behind, when the player stumbled and fell earlier than he was expecting, Eddens said.

He watched Bartlett soar out to a 4-1 lead.

"After I got that penalty I was really mad at myself," Eddens said. "It was scary just being in there watching them score. I was just looking up to the sky hoping I could come back and change it and make up for my penalty."

Four seconds after getting back on the ice, Eddens scored to cut Bartlett's lead to 4-2 and he delivered four goals and four assists in East's 8-4 win. Teammate Chase Solberg added a hat trick and four assists and backup goalie Jesse Oja tallied 37 saves for the T-birds.

Eddens and Solberg provided an unstoppable duo that East had been lacking, Gieszler said.

"I told (Eddens) if he wants to be a great player, the difference is you have to elevate the players around you too," Gieszler said. "He did that that night."

In a sport where most players are constantly going on and off the ice, Eddens is usually forced to stay on the ice for the whole game because he is such big a threat to score. He led the CIC with 11 goals and was fourth in points with 18 in conference games before the break this season.

Staying on the ice at all times is a challenge, so Eddens tries to pace himself to conserve energy, he said. But he's not complaining about it.

"I have to play all 60 minutes of most games, don't really get off that much, (but) it's just fun," he said. "A lot of the freshmen look up to me and a lot of my teammates just help me.

"If didn't have them, it'd be really hard to be doing what I'm doing right now."

The East hockey team has struggled in recent years — the T-birds haven't advanced to state in any of Eddens' four seasons — but Eddens said he never considered playing anywhere else. His father, brother and sister all graduated from East.

After he graduates this spring, Eddens said he hopes to go on to play junior hockey, or college hockey if juniors doesn't work out.

In the meantime, the goal is state.

"We always know we're the underdogs against most teams," Eddens said.  "(We're) just thinking about how we could upset so many teams just fuels us in every game we play."

The T-birds pulled a couple of big upsets last season. Eddens scored a hat trick in East's 3-0 win over Dimond — the T-birds first win over a CIC team other than Bartlett in four years.

In another game against Service, Eddens scored a goal in the closing seconds to give East a win.

Eddens' hope is that the T-birds can do it again this season and make it to state for the first time his career.

"Maybe, like last year, we pull off a few upsets, and, maybe, make it to state," he said.

(Statistics and standings are based on information reported to the Cook Inlet Conference through Jan. 8)