Road to redemption leads Wasilla to 4A boys championship 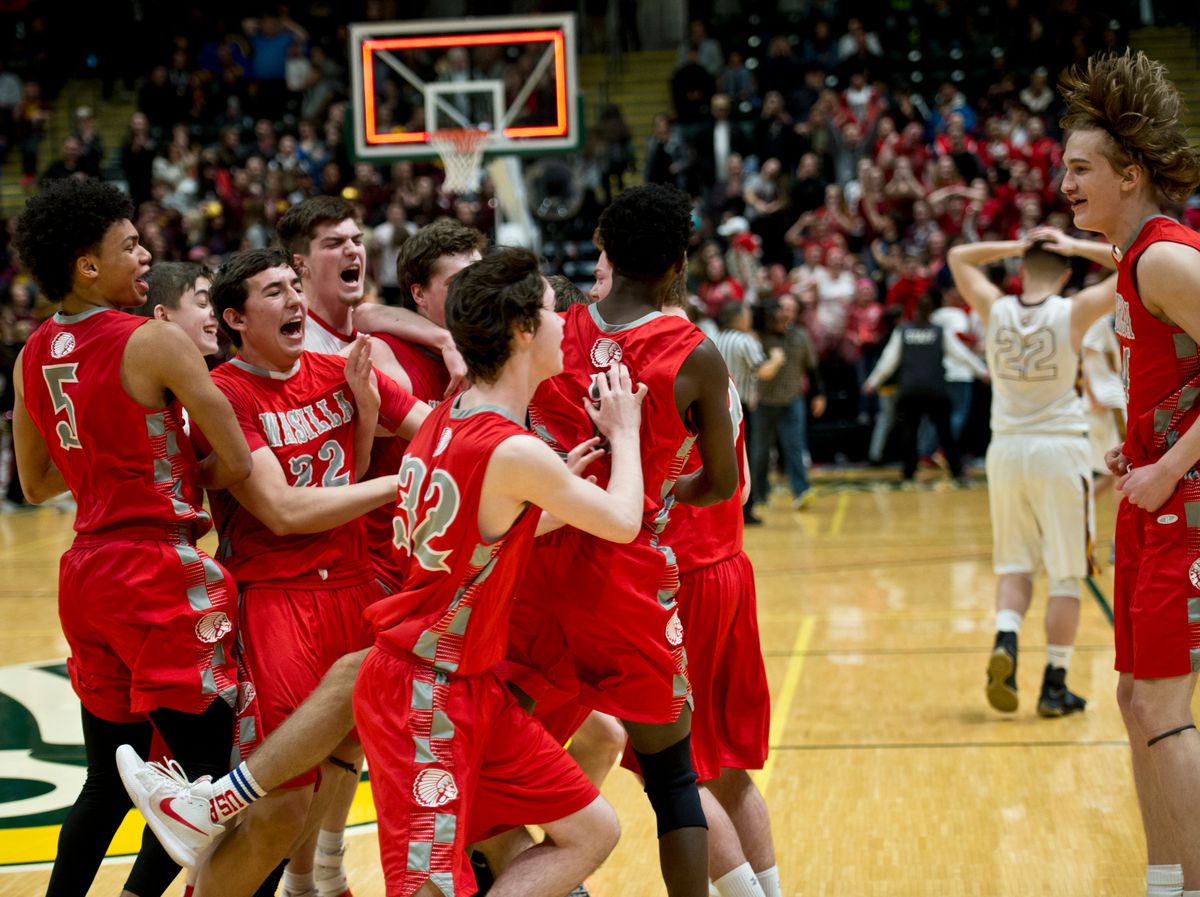 For 364 days, Aeron Milliron carried with him the memories of countless consolatory hugs.

After the performance the Wasilla High senior and his teammates turned in Saturday night at a raucous Alaska Airlines Center, he won't soon stop giving and receiving embraces filled with joyful redemption.

Almost a year removed from his costly miscue in the Class 4A state title game, Milliron ruggedly poured in a game-high 19 points to lead his squad to a scintillating 47-44 victory over Dimond in a March Madness Alaska rematch for the ages.

Wasilla (23-3) earned its second 4A crown in school history and its first since 2007. Last season, the Warriors dropped a 50-46 decision to the Lynx with Milliron's late foul playing a pivotal role in that game's final moments.

"The lesson you learn is to keep grinding with your teammates and do everything you can to get better," Milliron said. "Whatever it takes to get a championship. We put in hours upon hours of work, sweat, blood and tears.

"I'm so proud that we earned this — no one can take it away from us."

Amid the jubilation that consumed the Wasilla bench in the moments after the final buzzer sounded, Warriors coach Ryan Engebretsen considered the teachable moment. He beamed in doing so.

"All year long, I told these guys if I wasn't a good enough man without that (2017) state title, I wouldn't be a good enough one with it," Engebretsen said. "This entire group bought into what we needed to do and believed in themselves.

"The way last year ended and this one ended for (Milliron), he will remember all of it for the rest of his life and have a positive note to add to it all. It's unbelievable. It's surreal, and we're going to enjoy it for a very long time."

Wasilla senior guard Jordan Knight set up Milliron on the low right block to give the Warriors a 41-39 lead with 2 minutes, 52 seconds to play. Ultra-talented Dimond sophomore point guard Isaiah Moses (team-high 14 points and six assists) quickly tied it up with a runner down the left side of the lane.

Devine then missed a pair of free throws with two seconds left. But Moses' half-court heave for Dimond (22-3) fell just short of tying things up at the buzzer, tickling the bottom of the twine.

Yes, it was quite the riveting show. Dimond failed to win its seventh crown, finishing runner-up for the fourth time in school history. But that didn't stop Lynx coach Brad Lauwers from appreciating the Wasilla-Dimond rivalry of these last two seasons.

"I think both teams get to these spots because we execute as a team the way we want to most of the time," Lauwers said. "Down the stretch here tonight, we didn't do that quite as much as we'd like to have done."

Early Sunday morning, Lauwers and two members of his coaching staff joined Wasilla girls coach Jeannie Hebert-Truax and two of her coaches on a trip to the historic McDonald's All-American high school basketball festivities in Atlanta, Georgia. Lauwers will coach the West region boys team and Hebert-Truax the West region girls in Wednesday games that will air live on ESPN.

"We're certainly going to have some fun and are very cognizant of representing the state," Lauwers said. "We've seen the great coaches of Alaska come through here, 1A, 2A, 3A and 4A, the last few weeks. It should be a proud moment for everyone in the state."

The upcoming experience lent Lauwers some levity moments after an excruciating loss.

"You know, I don't mind going down as the second-best coach in 4A this year," he deadpanned.

Lynx 6-foot-7 junior Evan Hoosier finished with 10 points and senior Nicolas Horning stuck himself in the middle of the action most of the night, totaling eight points and nine rebounds.

But it was Milliron earning the championship and the last word this time around.

"I'm a river and I only flow forward, looking ahead not at the past," he said. "I'm just so happy."

Chugiak stormed to a 21-9 lead in the first quarter but West charged back in the fourth quarter, outscoring the Mustangs 21-11 to tie the game 50-50 and force overtime.

Fouls and free throws made a difference — Chugiak outscored West 21-4 at the foul line, and West's most productive player, Jamari Lawrence, fouled out after supplying the Eagles with a game-high 20 points and a team-high seven rebounds.

Patrick McMahon led the way with 19 points, Sullivan Menard had 17, Will Freeman 14 and Jon Pomrenke 10.

That was more than enough to make up for a big game from Juneau's Erik Kelly, who racked up 20 points and 15 rebounds.