Alissa Pili, a star in Anchorage basketball, volleyball and track, draws a crowd for signing her name 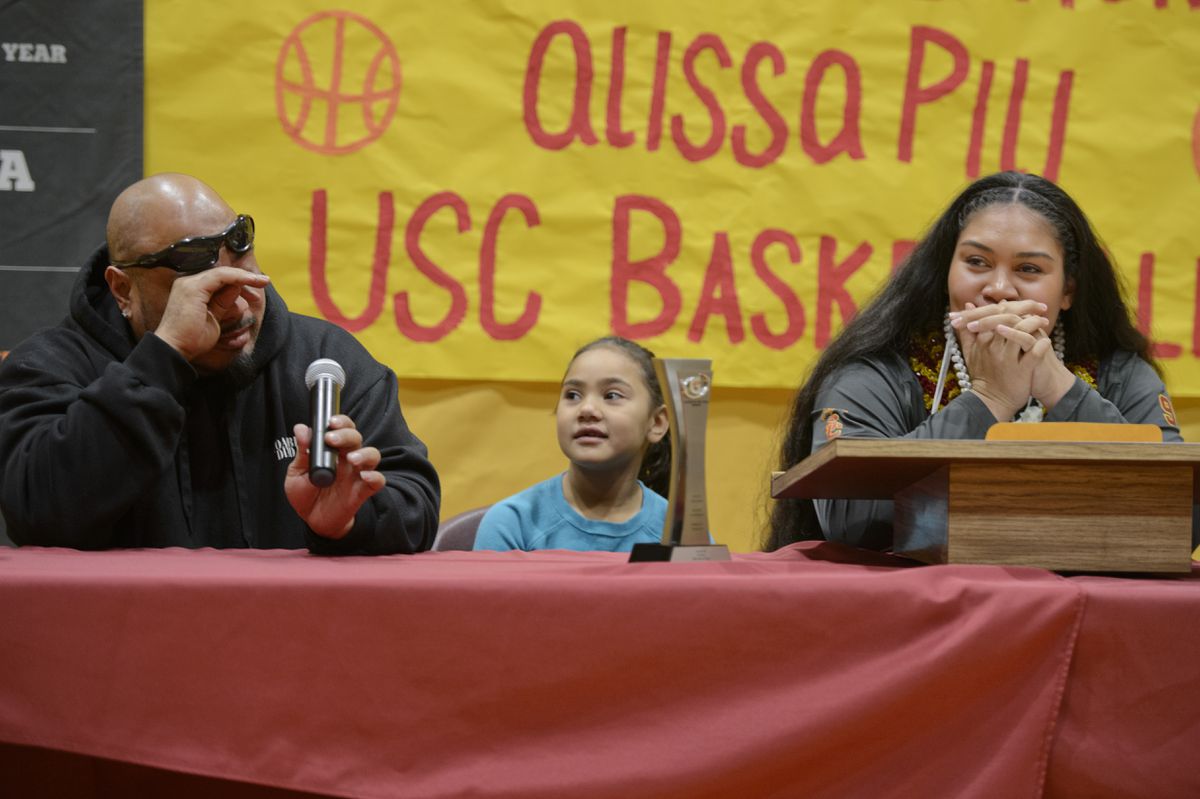 Billy Pili, left, gets choked up as he talks about his daughter Alissa Pili, right, during a National Letter of Intent signing ceremony Wednesday at Dimond High. Alissa Pili is headed to USC on a basketball scholarship. (Marc Lester / ADN)

Billy Pili, left, gets choked up as he talks about his daughter Alissa Pili, right, during a National Letter of Intent signing ceremony Wednesday at Dimond High. Alissa Pili is headed to USC on a basketball scholarship. (Marc Lester / ADN)

Wednesday was a National Letter of Intent signing day for high school athletes who have made their college choices, a day when a teenager signing his or her name on a piece of paper qualifies as a big deal.

Heather Pili, whose daughter was among those in the day's spotlight, can tell you why.

Alissa Pili, a 17-year-old senior at Dimond High, was the day's biggest catch, and not just because she is a formidable 6-footer who as a sophomore won a state wrestling championship in the girls' 220-pound weight class.

She is the 2017-18 Max Prep Sports national high school athlete of the year and a 10-time Alaska high school state champion, a multi-sports star who had her pick of colleges — and her pick of sports, for that matter.

Though she has won state titles in basketball, volleyball, track and wrestling, Pili long ago chose basketball as the game that will get her undivided attention in college. More recently she chose to play at USC, the Pac-12 Conference school where her brother, Brandon Pili, is a sophomore defensive lineman on the football team.

"I put them into consideration because my brother's there," Pili said Wednesday, "but seeing it first-hand I was really impressed by the whole family atmosphere. They made me feel like I'm a part of the team already."

Another thing that hooked her was the idea that USC's family atmosphere doesn't end once an athlete's eligibility does.

"They have a saying — it's not a four-year contract, it's a 40-year contract," she said. "Going away from my family is going to be hard, so I'm going to need that."

The second of Heather and Billy Pili's eight children, Pili put her family values on full display at her signing ceremony. Her parents and several siblings sat at a table with her, and members of her large extended family — many wearing cardinal-and-gold USC gear — sat in the bleachers along with a big group of Dimond students.

Banners, flowers, leis and cupcakes made the event festive. Billy Pili was initially too choked up to say much about his daughter's achievement but he recovered in time to lighten the mood. As Alissa began to sign her letter of intent, her dad grabbed her arm. "Anybody want her to go someplace else?" he joked.

A hallway or two away, in Dimond's multi-purpose room, another family gathered for cupcakes and tears.

Kady Bryant hasn't earned the headlines or national honors that Pili has — few from Alaska's Class of 2019 have — but Wednesday was a big day for her too.

Flanked by giant gold balloons spelling out "UO DUCKS," she signed a letter of intent with Oregon, where she'll be a member of the school's acrobatics and tumbling squad.

Acrobatics and tumbling isn't an NCAA sport — it is governed by the National Collegiate Acrobatics and Tumbling Association — but the team is part of Oregon's athletic program and it offers scholarships.

Earning one of them was a dream come true for Bryant, 18.

"As long as I can remember I've wanted to be a Duck," an emotional Bryant said after signing her letter of intent. "My cousin is an UO alum and she's been dressing me up in Ducks gear since I was little."

Bryant was 10 years old when that cousin, 2008 Oregon grad Allyson Berg, told her the Ducks had started an acrobatic and tumbling program. "I had just started doing competitive cheerleading, so from that background I came to this," Bryant said.

Berg, who was among those who watched Bryant sign her letter of intent, remembers telling her cousin about Oregon's team back in 2010. "I said, hey, this is right up your alley," she said. "For her to actually follow through is incredible."

Submit letter-of-intent signings to sports@adn.com and we'll add them to this list.