A year after a heartbreaking loss, Colony Knights are Alaska’s Division I boys soccer champions 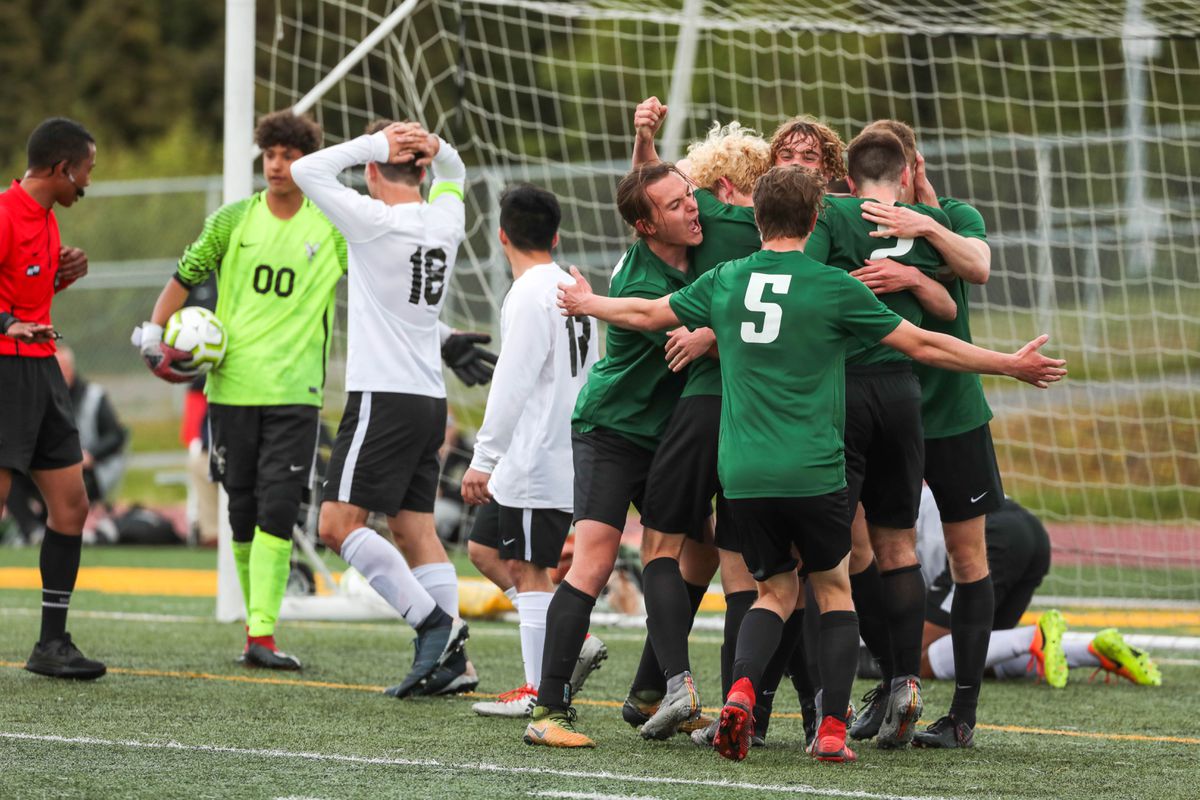 The Colony Knights celebrate a first-half goal during the state high school soccer match against the West Eagles Saturday, May 25, 2019 at Service High. (Loren Holmes / ADN)

The Colony Knights celebrate a first-half goal during the state high school soccer match against the West Eagles Saturday, May 25, 2019 at Service High. (Loren Holmes / ADN)

Hours before boarding a plane for his homeland early Saturday night, Colony High’s French foreign-exchange student Hugo Pochon enjoyed a moment that was bound to make his lengthy overseas flight a pleasant one.

Pochon punched home a goalmouth scramble score in the 34th minute to help the Knights to a 2-0 Division I state championship victory over the West Eagles in front of about a thousand full-throated spectators at chilly Service High.

Pochon’s goal and another by Kyle Dearborn in the 45th minute provided the offense in what otherwise was a defensive gem.

“Tough losses educate all of us as we grow up, that’s just how it goes,” longtime Colony coach Jeremy Johnson said. “You learn from those experiences and know you can’t leave anything on the field and leave things to a shootout.

“We talked about it all year. The two games we lost were 1-0 and 1-0 when we hit a few posts. We got to the state championship and knew we had to find the back of the net. We did twice. It was beautiful.”

Pochon was scheduled to leave Anchorage shortly before midnight, with stops in Denver and Newark before a flight to Paris. It will be Monday in France by the time he gets home.

“My parents were able to watch the match (on the internet)” said a thrilled Pochon, who asked if his English was understandable through his thick accent.

Joschka Dammann, a German exchange student and fellow senior for the Knights, stood by as Pochon spoke. He’ll be in Alaska through June 23.

“I think we were a very good crew together, our technique allowed us to win,” Pochon said. “What I’ll remember most is all the running we did at the start of the season.”

Pochon arrived in Alaska just in time for the start of the school year in August. Thrown directly into the fire, he gave an emphatic “yes” when asked if preseason drills paid off.

A free kick of about 60 yards led to Pochon’s goal. A mass of humanity filled the area around the goalmouth until he was able to put the ball past West freshman goalkeeper Reese Schrage, whose exemplary play included eight saves.

The match was the second of the season between Colony and West (11-5-1). On April 9 the Knights cruised to a 6-0 win against a West team that was playing its first outdoor match of the season and did not yet have senior wunderkind Jack Green in the lineup.

“I’m a huge hockey fan so I used the analogy of the St. Louis Blues, who were dead last in the entire NHL,” Johnson said of the Stanley Cup finalists. “On April 9, we beat a terrible team and that was not the team we played tonight.

“Thankfully, they believed me because West was a completely different team as we all saw.”

Dearborn delivered Colony’s insurance goal on a 15-yard boot from left center, near the top of the penalty box. The Knights finished with 18 scoring chances.

At times, Green showed the skill and dazzle that led him to a couple of years with an Outside soccer academy and warrant Alaska Player of the Year hype. He returned to Anchorage for a senior year spent with friends and to play with brother Jordan Green, an Eagles sophomore.

The Eagles, winners of eight of their final 11 matches, were trying to win their first state title since 1993.

“It was a meaningful experience and it’s unfortunate I wasn’t able to win state with Jack on the chance I got,” Jordan Green said. “Coming into state, we were underdogs (and) really thought this would be a rebuilding year.

“The fact we got to the finals was a huge accomplishment. We know in the coming years, we’ll take state.”