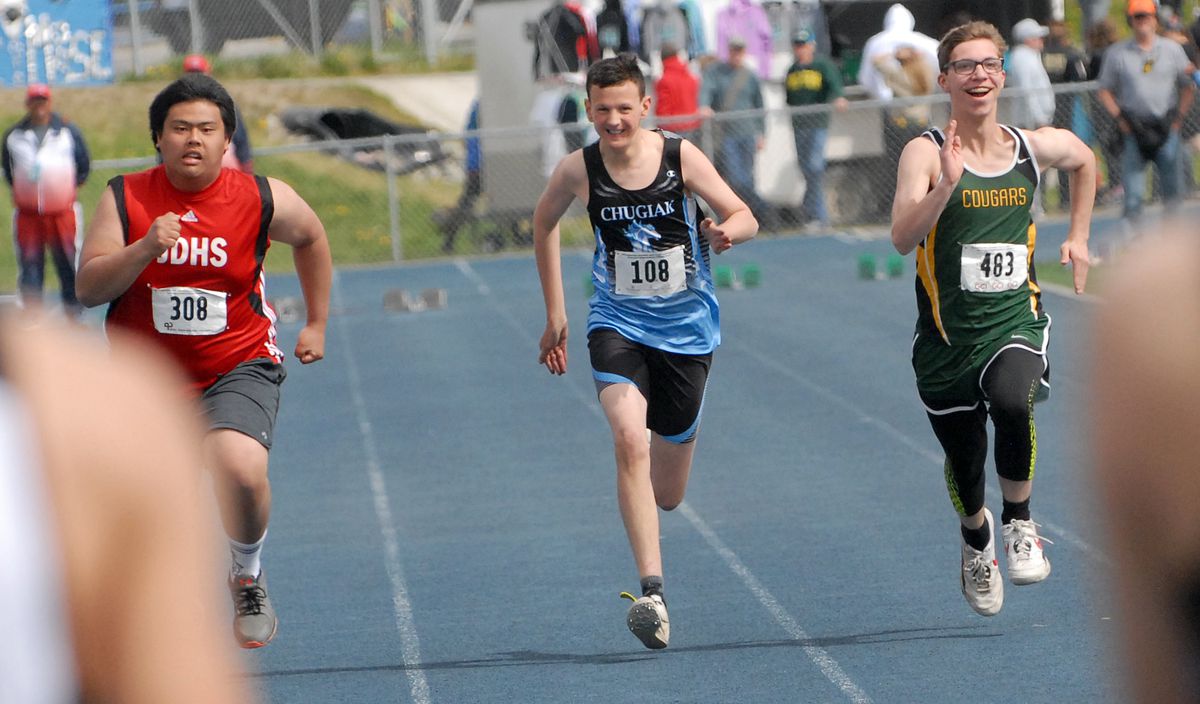 Average doesn’t cut it at the Alaska high school track and field championship meet, where each year the state’s most gifted young athletes run, jump and throw against each other, and sometimes history, to see who can be the best of the best.

Some people would give anything to be average.

Even surrounded by elite athletes, Chugiak High freshman Ozric “Oz” Sparks stands out. When the lanky teen prepares to sprint down the runway toward the long jump pit, he claps his hands rhythmically until everyone surrounding the jump pit starts clapping too. His smile stretches from ear to ear as Sparks sprints down the runway and leaps into the sand. By the time he’s dusting himself off, everyone is smiling.

“He’s definitely a unicorn. He’s just got this magical thing, you know?” said his dad, Roger.

Oz has cerebral palsy and diabetes. When he was a baby, he nearly died when he stopped breathing in his crib. Roger performed lifesaving CPR, but the incident left Oz with a traumatic brain injury and unable to speak.

But it didn’t rob the boy of his personality, which above all is undeniably enthusiastic.

“Just everybody around him gets excited to be around him and he transcends his disability,” Rogers Sparks said during an interview at this year’s state track meet, where Oz participated in the Partners Division. “It’s like immediately people just kinda see that heart in him.”

That was the case this year, when Oz decided he wanted to go out for the track team. Head coach Melissa Hall said she was immediately impressed by the freshman’s desire to be part of a team as he excitedly inquired about getting a uniform as an official member of the school’s powerful track program.

“The first thing he wanted was clothes,” Hall recalled.

Once he got his uniform, Sparks became an instantly beloved member of the squad, said Hall, whose teams have won three state championships since 2016.

“He just brings kind of a fun energy that made everyone take to him,” Hall said.

Being a part of a team means everything to Oz, Roger said. Since his son has difficulty communicating with his classmates, sports are one of few ways he can interact with peers.

Oz competed this year in the Partners Division, which allows athletes with special needs to partner with a member of their school’s track team to compete against partner teams from other schools. The division is an official part of the state track meet, where this year Sparks and partner Caleb Lattier competed in the long jump and 100-meter dash against athletes from Anchorage, Juneau, Fairbanks and Sitka.

Watching the boys warm up together and compete as teammates has been heartwarming for Sparks and his wife, Jennifer, and the program has meant the world to their son, Roger said.

“You just see the heart of these kids. Caleb is just such a solid human being at this level, it sorta brings you to tears to see the humanity of it all,” he said.

After completing each event at state, Sparks and the other Partners competitors exchanged high-fives and hugs with their rivals, just like athletes in every other event.

Service High special education teacher and Partners mentor Adam Ahonen has the largest Partners Club in Alaska, where this year 30 to 40 participants took part in track and field. He said the program allows students with special needs to interact with other students on an even footing.

“I think that social inclusion piece and that sense of belonging and that typical high school experience is very important,” he said.

Sometimes the partners get as much or more out of the relationship than the athletes with disabilities.

“He shows that no matter how good you are, you can always be happy to be running and competing,” Lattier said.

Chugiak jumping coach Charity Manwaring said Sparks was held to the same workout standards as the other athletes and finished every workout with a smile on his face.

“He brought such a positive energy to our team,” she said.

Chugiak’s boys team won the Division I state championship this year behind a balanced squad that used chemistry and all-around talent to dominate. Hall said there’s no doubt Sparks helped the team through his attitude and positivity.

“The more diversity you can have, the better,” she said.

The Partners Division needs more participants, according to Special Olympics Alaska initiatives assistant Sarah Haynes. While there are pockets of strong interest in the sport -- such as Ahonen’s program at Service -- Haynes said it takes interest from coaches and teachers to make it happen.

Haynes said Special Olympics and state athletic association officials stressed the need to get more involvement next year following this year’s state meet, and she’s hopeful the program will grow as more people see the value in inclusion.

“After state, we felt like a lot of the coaches were really fired up for next year,” she said.

Roger Sparks said the program has provided his son with something he can’t get elsewhere: normalcy.

“He doesn’t get to go spend the night or hang out at the mall, so this is his way of doing that,” he said.

Oz and Caleb finished fifth in the Unified long jump, collecting state meet medals on a podium in front of hundreds of cheering fans. Afterward, the boys walked proudly through the infield as Roger Sparks gave his son a fist bump and congratulated Oz and Caleb on a job well done. It was an average scene made extraordinary in its normalcy.

“That’s what anybody wants, right?” Roger asked. “To just feel like they belong.”