Alaska football begins with Monroe’s team of 12 at Seward, West-Soldotna IV and a pair of polls 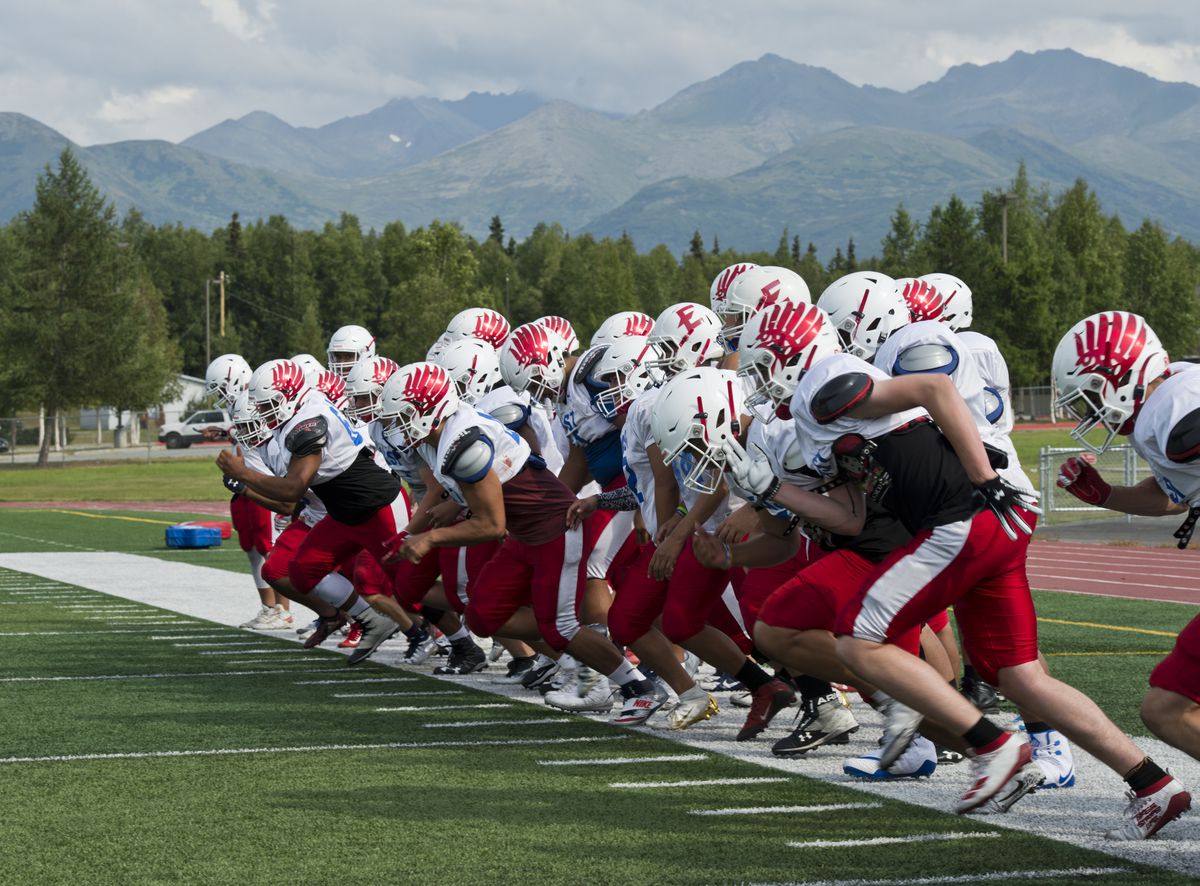 The sidelines will be sparsely populated when the Alaska high school football season kicks off Friday afternoon in Seward.

The Seahawks host Monroe Catholic of Fairbanks at 4:30 p.m., and playing time shouldn’t be an issue for kids on either team.

Seward expects to suit up 13. Monroe will have 12. That will put two players on the Seward sideline and one on the Monroe sideline.

“So many of our kids are still working (summer jobs),” Seward athletic director Al Plan said. “When it’s all said and done, we should be close to 20.”

Monroe’s roster is expected to grow too, but not by much. Coach Marcus Cogley said he hopes to have 14 or 15 eligible players after this week’s opener.

If it weren’t for a high school 100 miles away from Monroe, the Rams wouldn’t be playing at all this season.

In a cooperative effort approved by the Alaska School Activities Association, players from Tri Valley High School in Healy will be allowed to play for Monroe. The Rams roster will also include a player or two from Hutchison High School — a Fairbanks school that doesn’t offer football — and a home-schooler from Fairbanks.

Half of Monroe’s team from last year — nine out of 18 players — graduated last spring. High school enrollment at the Fairbanks parochial schools is in the low 100s, athletic director Frank Ostanik said.

“I tell you, we wouldn’t have a team this year if it wasn’t for kids from other schools playing with us,” Ostanik said.

Two players are from Tri-Valley, home of the Viking Warriors; one is from Hutchison, home of the Hawks; and one is home-schooled.

Actually, it’s the Monroe Rams, and they aren’t the first team to blend players from more than one school. In Juneau, Juneau-Douglas and Thunder Mountain high schools are beginning their second season as a consolidated team, and in Homer, students from Voznesenka — a tiny school 22 miles away that no longer fields a team — are allowed to play for the Mariners.

None of the players in Juneau or Voznesenka face a 100-mile, one-way commute though.

During the preseason, Cogley said, the two Tri-Valley players and one of their parents spent two weeks in Fairbanks in an RV.

Now that school is about to start, the Tri-Valley players — Nate Talerico and David Smith — will spend less time with the Rams.

“Mondays we do film, and with that we can Skype them in,” Cogley said. “On the other days they aren’t coming up, we’ll set up drills they can go through.”

Helping the cause is Tri-Valley teacher Daryl Frisbie, who Cogley said “is doing the heavy lifting” on the Healy side of things. Tri-Valley has toyed with the idea of starting a team and even bought some gear about 10 years ago, Cogley said, but there’s never been enough kids to field a team of 11.

As a result, Talerico and Smith are gridiron novices, but Cogley liked what he saw at a jamboree last weekend.

“For never having played before, they picked it up really quickly, especially the idea of having contact,” he said. “We were impressed.”

Friday afternoon’s Seward-Monroe game is the first of the season in Alaska, but several others kick off later Friday.

The marquee game is at 7 p.m. at West High, where a pair of powerhouse teams will battle. The West Eagles, the Division 1 state runner-up the last three seasons, will take on the Soldotna Stars, the winner of the last seven Division 2 state titles.

Bet you can’t say this about any other state: Alaska has a 14-to-1 ratio with its football teams and football preseason polls.

There are 28 football teams, and this season there are two polls.

The poll from the coaches is the early-season favorite, because it provides separate rankings for all three divisions. The ASBN poll lumps Division 2 and Division 3 teams into a single “medium-small” division.

The polls disagree when it comes to who’s No. 1 among Division I teams. The coaches say it’s defending champion East; the broadcasters say it’s West.