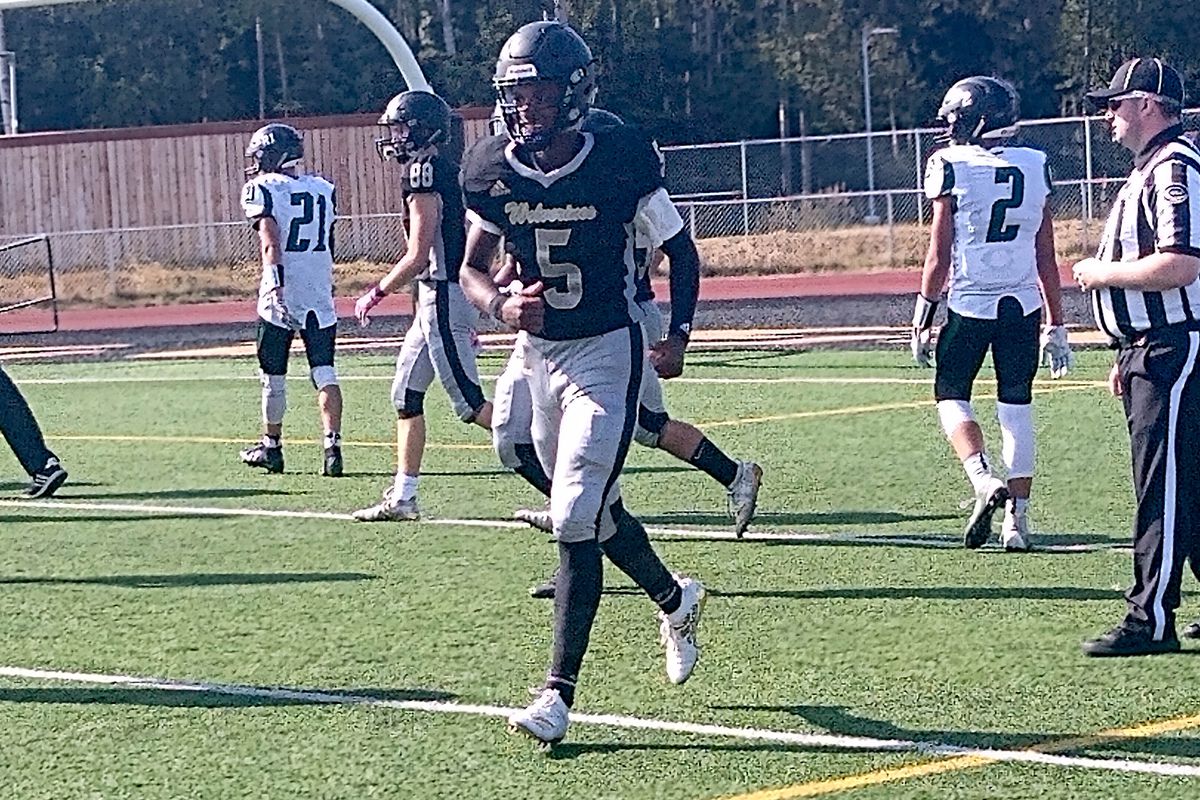 South quarterback Jackson Harmon rushed for two touchdowns and more than 100 yards to help lead South to a 38-7 win over Colony on Saturday, Aug. 24, 2019 at South High in Anchorage. (Photo by Joshua Reed)

South quarterback Jackson Harmon rushed for two touchdowns and more than 100 yards to help lead South to a 38-7 win over Colony on Saturday, Aug. 24, 2019 at South High in Anchorage. (Photo by Joshua Reed)

The South Wolverines recovered from a sloppy start to grab a 38-7 win over the Colony Knights in a non-conference football matchup Saturday at South High.

The game didn’t get off to the most auspicious start for South and junior quarterback Jackson Harmon, but the Wolverines leaned heavily on their running game and a relentless defense to bounce back.

“One thing we talk about all the time is break your rearview mirror,” South coach Walter Harmon said. “We never dwell too much on the play before, the series before or even the game before, so I think as long as we can continue to move to the next play and give ourselves a chance, we’ll be fine.”

It was the second straight victory for South (2-0), which opened the season last week with a 37-0 dismantling of Bartlett.

After a long kickoff return by junior Quincy Heartwell-McKoy put South at Colony’s 27-yard line at the start of the game, Jackson Harmon was picked off on his first throw of the game. South’s defense bailed him out on the very next play with the first of its two safeties on the day.

A field goal upped South’s lead to 5-0, but the mishaps kept coming for Harmon, whose fumble was returned for a touchdown by Ridge Raval, giving Colony a 7-5 lead.

That was the only time the Wolverines trailed. After that they kept the ball on the ground and racked up more than 200 yards thanks to the efforts of Harmon and senior running back Carter Weber-Thomas.

Both eclipsed the 100-yard mark on the ground and both rushed for two touchdowns, with Weber-Thomas gaining a team-high 140 rushing yards.

“It just started with execution,” said the younger Harmon, the son of the head coach. “We went into the locker room and coaches just gave a great speech and we came out ready.”

The Knights played South receivers tight, so the Wolverines took what the defense gave them and ran the ball up and down the field, with Thomas pounding it up the middle and Harmon getting loose on the edge.

“I thought I started slow,” Harmon said. “Then I decided I was going to use my legs to try and get us as far as possible down the field and let my specials do their thing too.”

Harmon and his receivers weren’t in sync for much of the game, something Walter Harmon credited to Colony’s pass defense.

“I thought they did a really good job of staying on top of our receivers and trying to disallow us from getting free releases,” he said.

Both of Harmon’s touchdowns came on long jaunts in which he made several jukes and cuts before outracing trailing defenders to pay dirt. On his first touchdown he bounced the play outside before taking it up the right sideline from 32 yards out. On the second he started to the right before bouncing the play back inside for a 27-yard score.

“The thing with him is that he’s still trying to find his confidence early and he’ll get there,” Walter Harmon said. “Once he gets going, he’s fine but it took a minute, so I’m glad he showed up.”

Because Colony’s only points of the game came on a fumble return, the game marked the second straight week that defensive coordinator Dana Curtis’ defense held an opponent scoreless.

The Wolverines’ defense was fast, physical and smothering. Their front seven pretty much owned real estate in the Colony backfield -- they penetrated on seemingly every play -- and their secondary made big plays and big hits. The unit registered several sacks, picked off three passes and forced multiple fumbles.

“I can’t say enough,” Walter Harmon said. “They’re executing at a really high level. We got youngsters that are stepping up playing ... so it’s exciting.”

This story was updated to identify Quincy Heartwell-McKoy as the South player who returned the game’s opening kickoff.