It’s the last weekend before football playoffs, and seedings are at stake 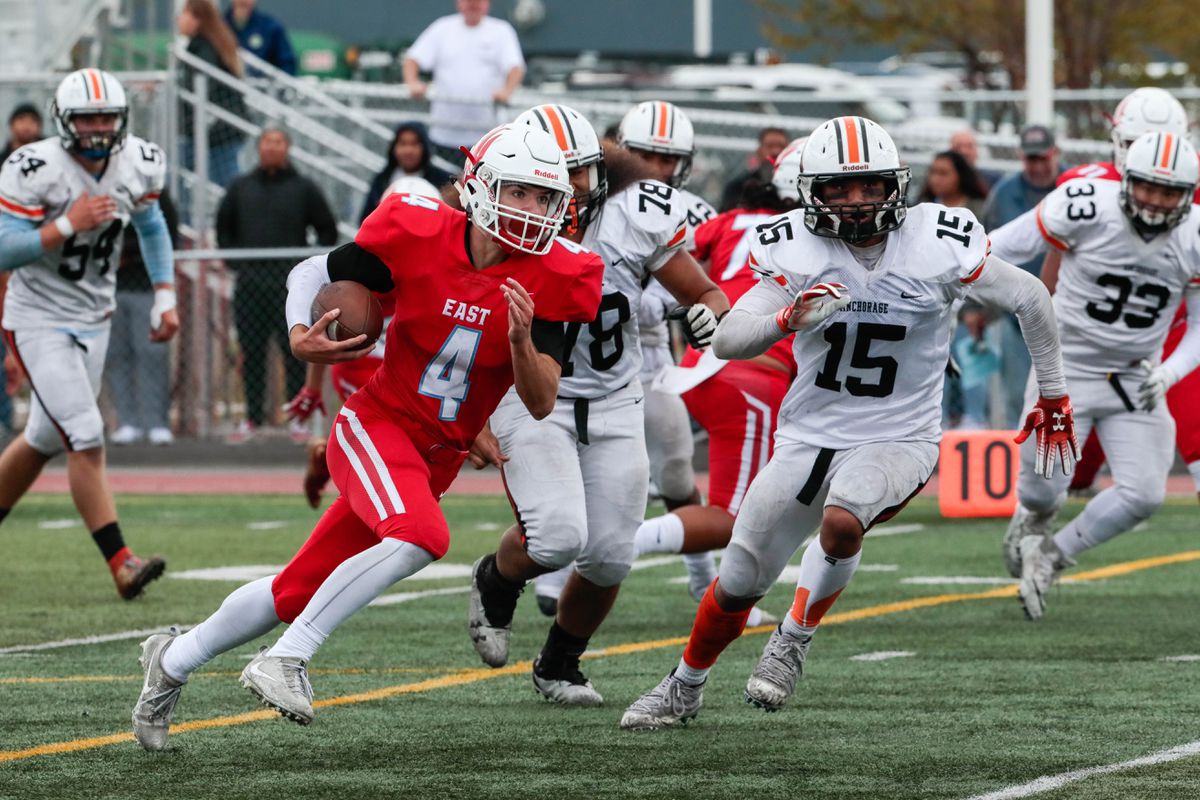 Quarterback Gavin Oakley and the East Thunderbirds can clinch the Cook Inlet Conference title Saturday with a win over South. (Loren Holmes / ADN)

Quarterback Gavin Oakley and the East Thunderbirds can clinch the Cook Inlet Conference title Saturday with a win over South. (Loren Holmes / ADN)

It’s the final week of the regular season in Alaska football, which means it’s time for the Potato Bowl, the Dog Bowl and the Battle of the Bridge — rivalry football games with special trophies at stake.

Perhaps more importantly, it’s time for the playoff picture to come into focus.

All but one of Alaska’s 16 playoff spots have been filled. The only berth still up for grabs is in Division III’s Aurora Conference, where Barrow (3-0 conference record) has clinched the regular-season championship but three teams — Eielson (2-1), Redington (2-2) and Monroe (1-2) — all have a shot at the No. 2 spot.

Eielson could end the debate by beating Monroe on Saturday. That would make Eielson and Barrow the only teams in the conference with three or more conference wins.

If Monroe beats Eielson, three teams would share second place — Monroe, Eielson and Redington – and tiebreakers would come into play.

East (3-0 conference), West (2-1), Service (2-1) and South (1-2) have clinched the CIC’s four Division I playoff spots, but how they are seeded depends on what happens Saturday when East hosts Service and West hosts South.

Tiebreakers for the CIC are head-to-head results, followed by points allowed. The only scenario that would render tiebreakers unnecessary is wins by East and West. Should that happen, East would claim the conference championship and the No. 1 seed, followed by West, Service and South.

If East and South win, East would be the top seed and the three other teams would be 2-2. Points allowed would break the three-way tie.

In the Chugach Conference, Chugiak (3-1), Bartlett (2-1), Juneau (2-1) and Colony (2-2) are playoff-bound. Either Chugiak or Juneau will be crowned the conference champion but Chugiak has no control over its fate — it plays Eagle River in Saturday’s Battle of the Bridge showdown, which is a nonconference game.

The pivotal game is Saturday’s meeting between Bartlett and Juneau in Juneau.

In Division II’s Railbelt Conference, Lathrop and West Valley are both 2-0 going into Saturday’s Dog Bowl, so the winner will claim the conference title and the top seed in the playoffs.

Soldotna (2-0) and Eagle River (2-1) are the playoff teams in the NLC, and even if Kenai upsets Soldotna this weekend the Stars are the No. 1 seed based on last week’s smackdown of Eagle River.

Houston (4-0) and Nikiski (2-1) will represent the Peninsula Conference in the playoffs. Although a Nikiski loss to Seward on Friday would create a tie for second place between the Bulldogs and the winner of the Homer-Ketchikan game, Nikiski would take the tiebreaker based on its wins over Homer and Ketchikan.

Meanwhile, two teams that are out of the playoff picture still have something to play for Friday.