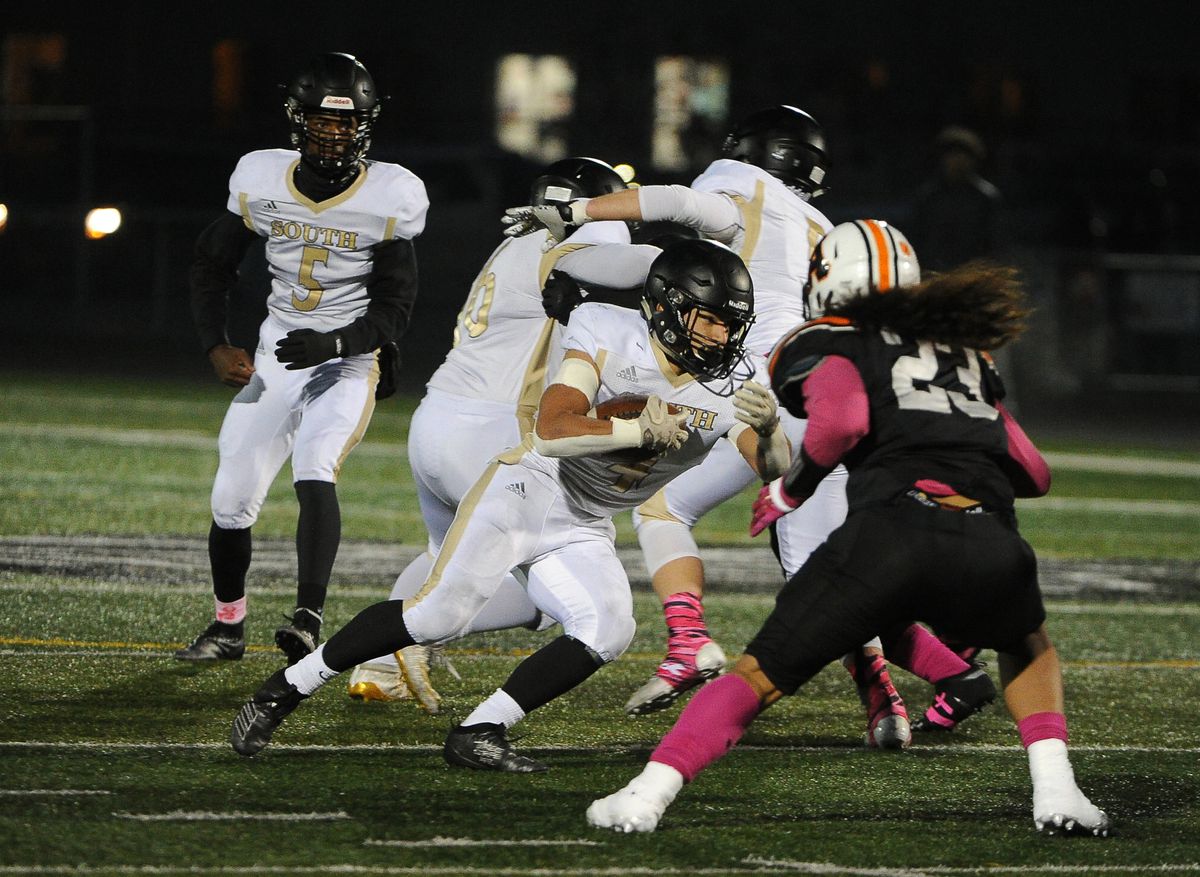 The aftermath warranted the overflow of emotion from all sides. Through the lengthy handshake line, tears of disbelief were everywhere.

The tinge of disappointment or the look of pure joy depended on the color of the uniform. Regardless, the South Wolverines, wearing white, and West Eagles in black served up a high school football classic for Anchorage on Friday night.

South junior Quincy Heartwell-McKoy snuck behind the defense and hauled in junior Jackson Harmon’s 36-yard laser for the game-winning touchdown with 18.4 seconds remaining. The Wolverines bested West, 21-14, to earn a thrilling Division I semifinal victory and a spot in next week’s state championship game.

“This moment is so important, I can’t believe it’s happening,” said a teary Heartwell-McKoy, whose older brother Jayden scored on a highlight-reel, 38-yard pass play from Harmon near the end of the third quarter. “We got ourselves one more game and it will soon be time to get back to work.”

South, ranked third in the latest Alaska Football Coaches Association poll to West’s top ranking, advanced to the title tilt for the first time since 2014. The Wolverines (6-4) will vie for the school’s fourth crown in a fifth championship appearance. South has a date with second-ranked Service at Anchorage Football Stadium on Oct. 25 at 7 p.m.

The Cougars downed fourth-ranked Colony 27-18 in the other semifinal played Friday evening.

South’s defense stopped West on fourth down with 1:49 left in the final quarter and the Wolverines took possession at their opponent’s 46-yard line. The running of Harmon (35 total rushing yards on nine carries) and senior Carter Weber-Thomas (75 yards on a game-high 21 carries) earned a first down. On third-and-10 after Harmon’s only two incomplete passes of the second half, the coach’s son and quarterback floated to his right and found the right amount of time behind the line of scrimmage as West tried everything to make a stop.

Quincy Heartwell-McKoy maneuvered his way past West’s deep-cover defensive backs and caught the pass at the goal line, near the middle of the end zone.

“There was so much pressure (in that moment), I’m so glad we were able to rise up,” said Harmon, who finished with 162 passing yards after throwing for 45 and three interceptions in the first half. “At first, I didn’t see anything and I almost started to panic. But then I saw Quincy and threw the ball as hard as I could.

“He caught it and I lost my mind.”

Besides moving on in the postseason, South avenged a 19-9 Oct. 5 regular-season loss to West and ended the Eagles’ stupendous run of six straight championship appearances and six consecutive victories. In fact, 2012 marked the last time West didn’t play in the season’s final matchup. South knocked off Service 28-19 that year.

“Good teams make each other look bad and that’s what you saw in the early going,” said South coach Walter Harmon. “Both of these teams have been playing really high-caliber ball with high-caliber coaching and we made the most of the playoff season.

“We struggled a bit with patience and restraint, but the coaches and kids kept calm. It was fun to watch.”

The struggle was real for both teams in the first half. South compiled only 89 total offensive yards through the first two quarters and West totaled 125 yards. Neither squad sniffed their normal per-game averages. South finished with 271 yards, well below its 403-yard average coming in. West (7-3) amassed 254 yards after averaging 300.7 offensive yards in its first nine contests.

“In the last part of the game, we have to do as much as we can to get those points on the board,” said West senior lineman Alani Makihele. “It’s such a pressurized moment. It was so hard.

“But I love these guys. We definitely went through some trials and tribulations. All we’ve done, we did as a team.”

Meanwhile, the postgame passion continued. Opponents hugged one another. Individual winners and losers took time to find family and friends on the field, sharing many meaningful embraces. Quincy Heartwell-McKoy didn’t want to see the melodrama stretch on too much longer because he and the Wolverines need to concentrate on the task at hand — the championship game.

“Yeah, maybe we’ll get a little less emotional,” he said.