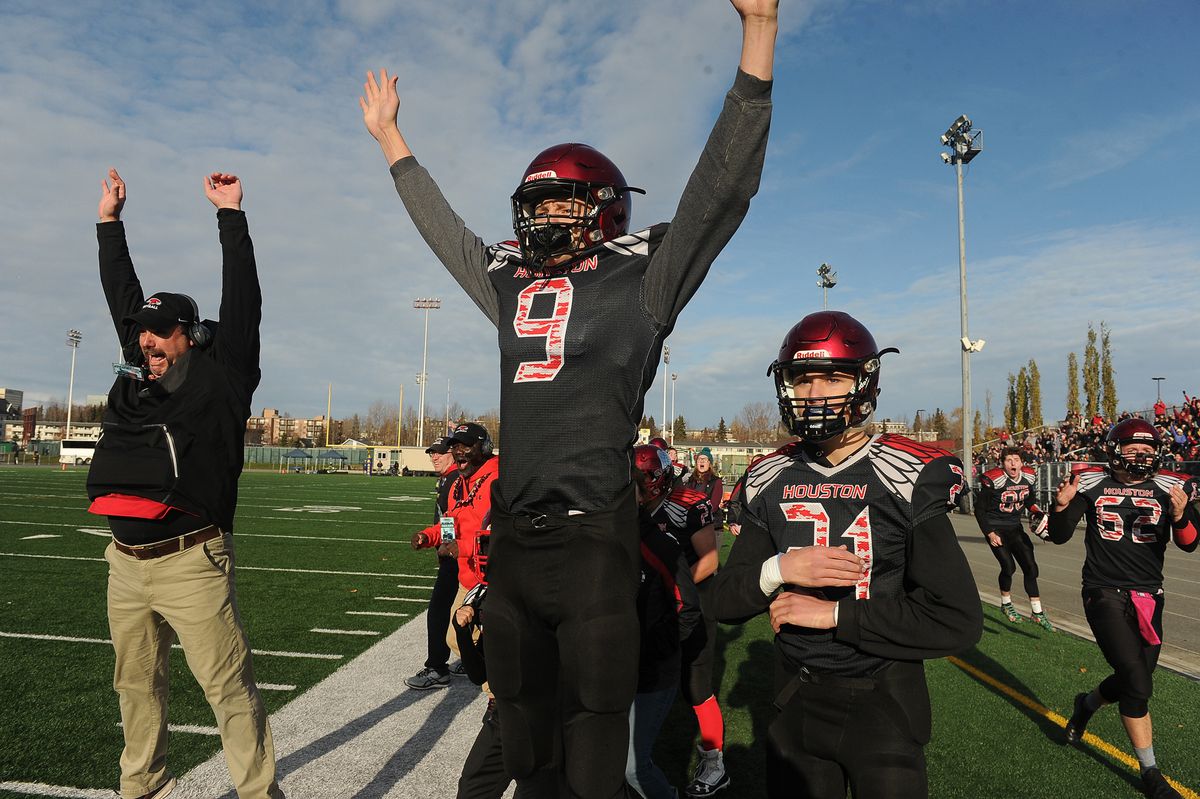 The Houston Hawks capped off an undefeated season Saturday with a dominant 41-8 victory over the Barrow Whalers in the Division III state championship game to secure the first-ever title and undefeated season in program history dating back to its inception in 1997.

“You always dream about this as a kid when you’re playing and when you start coaching you always dream of that happening,” Hawks head coach Glenn Nelson said. “To do it with no losses. … It’s pretty special to share with these guys.”

The win gave the Hawks their 10th straight win of the year and completed a season sweep of the Whalers, who they beat 31-6 in Week 3. It also avenged an opening-round loss to Barrow from last year’s postseason where they fell 18-7.

“We had some talent last year and we thought if we develop it and they believe in each other and play like a team then we had a real shot and they did that,” Nelson said.

The Hawks were led to victory by a trio of seniors who were phenomenal on both sides of the ball. Twin brothers Gavin and Owen Mulhaney were the workhorses and primary playmakers on offense and also contributed on defense from their linebacker spots. Middle linebacker Kennedy Fono led the charge on defense and chipped in on offense as well as a fullback.

“You hope to have one special player on your team, maybe two but when you have twins and they’re both special and their both leaders, combined with Kenny Fono back there it’s a deadly trifecta,” Nelson said.

Gavin Mulhaney was unstoppable on the ground with a tremendous rushing day that saw him finish with a team-high 174 yards. He only needed 160 yards to break the single-season rushing record. Not only did he exceed that mark, but he ran in three touchdowns as well.

“I couldn’t have done it without the line though or my running backs,” Gavin Mulhaney said about his record-setting day.

His brother Owen scored a 14-yard touchdown on a roll out to the right in the final seconds before halftime to give the Hawks a two-possession lead that they extended even more in the second half. Owen Mulhaney hauled in an interception late in the fourth quarter as well.

“It’s going to be here forever and I think it’s well deserved,” said Owen Mulhaney. “We work our hearts out every day after school with three-hour practices, we go and watch film and coaches set us up nice."

Fono was the most disruptive defender on either team with the way he practically lived in the Whalers’ backfield all game long. He consistently knifed through the line of scrimmage with speed and excellent anticipation on blitzes to drill Barrow ball carriers for huge losses and recorded a pair of sacks as well.

“I was just trying to play my best game because this is my last game,” said Fono. “We were slacking in the beginning of the game but we put everything together in the second quarter and (second) half."

“He lives in people’s backfields,” said Nelson. “He times his blitzes well, he figures out where they’re supposed to be and coach (Jared) Barrett puts them in a good spot and he executes well.”

After allowing the Whalers to grab an early lead in the first quarter with a 1-yard rushing touchdown from Barrow sophomore running back Ervin Feleti, the Hawks were lights out on defense, pitching a shutout the rest of the way. Houston’s defense recorded five total turnovers and even got on the scoreboard when junior defensive back Tolupo Falaniko had a terrific 60-yard return following his fourth-quarter interception that resulted in a touchdown.

“Coach Barrett has a nice blitz package and he’s got the right guys to do it,” said Nelson. “Part of it is just putting the right kids in the right spots and letting the kids play and he did a good job of that and those kids played lights out.”

This Houston team has been through a tremendous amount of adversity, both as a program and as individuals over the last year, after so many of their students and families were displaced and affected by the devastating November 2018 earthquake.

During the offseason, their high school had to be combined with neighboring Houston Middle School, which was damaged so severely that it was no longer deemed safe for usage. The combined school is now called Houston Junior Senior High School. The student-athletes have had to watch film and attend classes in crowded classrooms and portables stuffed to capacity.

Despite these adverse circumstances, the team was able to remain locked in and laser-focused on its upcoming season. The experience brought them closer together to the tune of 10 victories to zero losses and the first-ever state championship trophy to the city of Houston.

As for Barrow, they were unable to overcome their mistakes, penalties, turnovers and lack of consistent offense to keep up with the red-hot Hawks and looked overwhelmed up front on both sides of the ball outside of their lone scoring drive.

“The kids played hard,” Whalers head coach Chris Battle said. “They did the best they could. We got a lot of stuff to clean up. We’re young, we only had two seniors on the (offensive) line, we just got a lot of hard work to do to come back.”