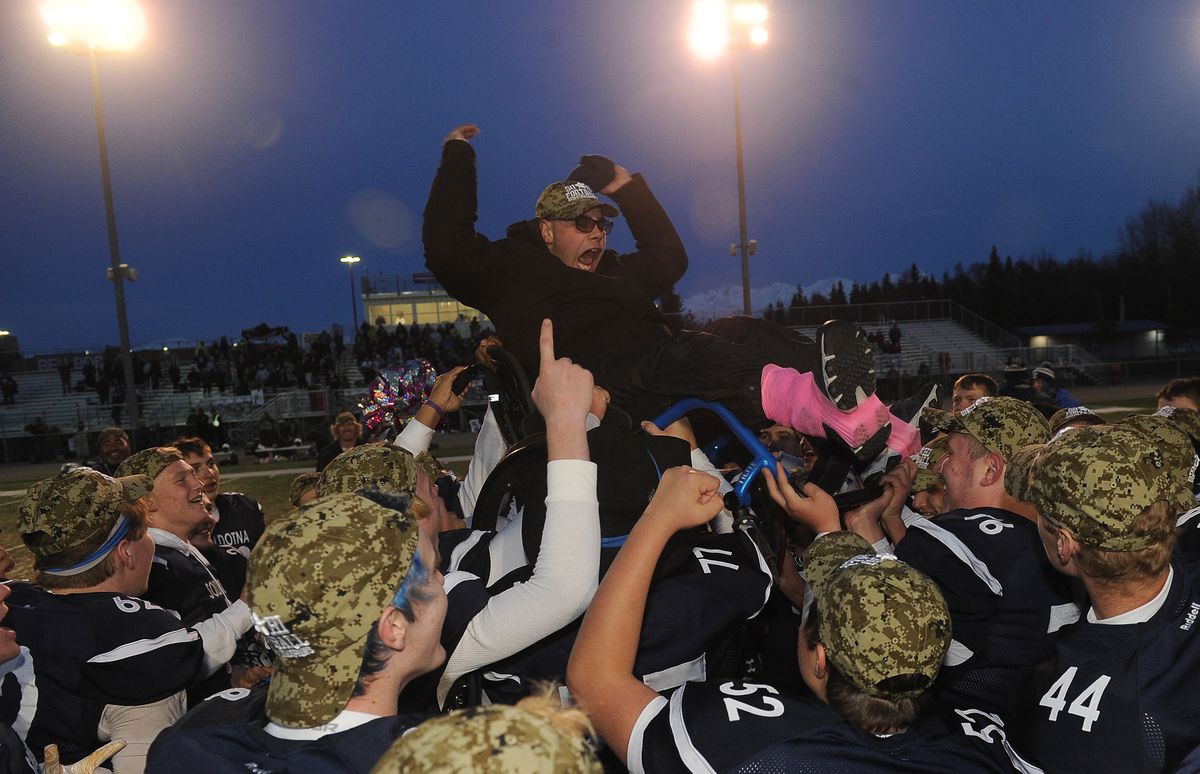 Team 20 scored 20 points in the first quarter Saturday and the rest was the kind of Alaska sports history that should stay etched in all memories.

Scoring on its first five offensive possessions and adding an interception return for a touchdown, Soldotna and the camouflage championship lids the players and coaches wore at game’s end meant there was no hiding the Division II dominance. The Stars won their eighth straight First National Bowl state title and 12th total with a 69-23 dismantling of Lathrop at Anchorage Football Stadium.

A vinyl sign titled Team 20 hung from the front of the Soldotna bleachers on the eastside of AFS. It featured photographs of all the team’s seniors and a few others who will graduate in 2020 — the number has coincidentally hovered around 20 students most of the season.

The late Macie Schroeder-Dalebout wasn’t pictured. Technically a junior with enough credits to graduate in the spring with the Class of 2020, the SoHi student died in a tragic car accident earlier in the week. She was part of the squad early Saturday evening and in the minds and hearts of her classmates.

“The whole thing is just surreal,” said Soldotna senior Jacob Cooper, the team’s center and anchor of the offensive line. “A lot of us were close to her and this game was for her.”

“That’s for Mama Macie,” said Truesdell, who finished with a combined 279 offensive yards and accounted for four touchdowns (two rushing, two passing). “She was the kind of the girl who helped out everyone, would do anything for you. She was always the girl to take care of everything.

“Some of the guys grew up with Macie and it was really tough, a weight was put on us. But I think we let our emotions come out tonight in a good way.”

Cooper and Truesdell confirmed Schroeder-Dalebout was definitely a member of Team 2020. The Stars’ senior class won a state championship all four years and only lost one game — the 2018 season opener against West.

“All the seniors have been playing together since we were 6 years old and the bond was just there,” Cooper said. “This is what we’re all here to do.”

Scoring opened with Truesdell’s 15-yard scoring run with 9:33 remaining in the first quarter. The Stars ran a meticulous 10 plays on the drive and seemed to hardly break a sweat.

However, Lathrop had an answer in its first state championship appearance of any kind since 1985. Malemutes senior Jace Henry, all 6-foot-4, 240 pounds of him, helped his team score and go ahead 7-6 with 6:47 left in the first. The Lathrop lead marked the first time the Stars trailed this season.

Henry finished the evening with 223 rushing yards and all three of his team’s scores.

“It’s quite a miracle how he pulls things off,” said Lathrop senior linemen A.J. Olo. “We help him, but I’m just grateful for him as a teammate and this opportunity.”

“This program will continue to be great,” said Cooper, one of those seniors who said goodbye to Stars football.