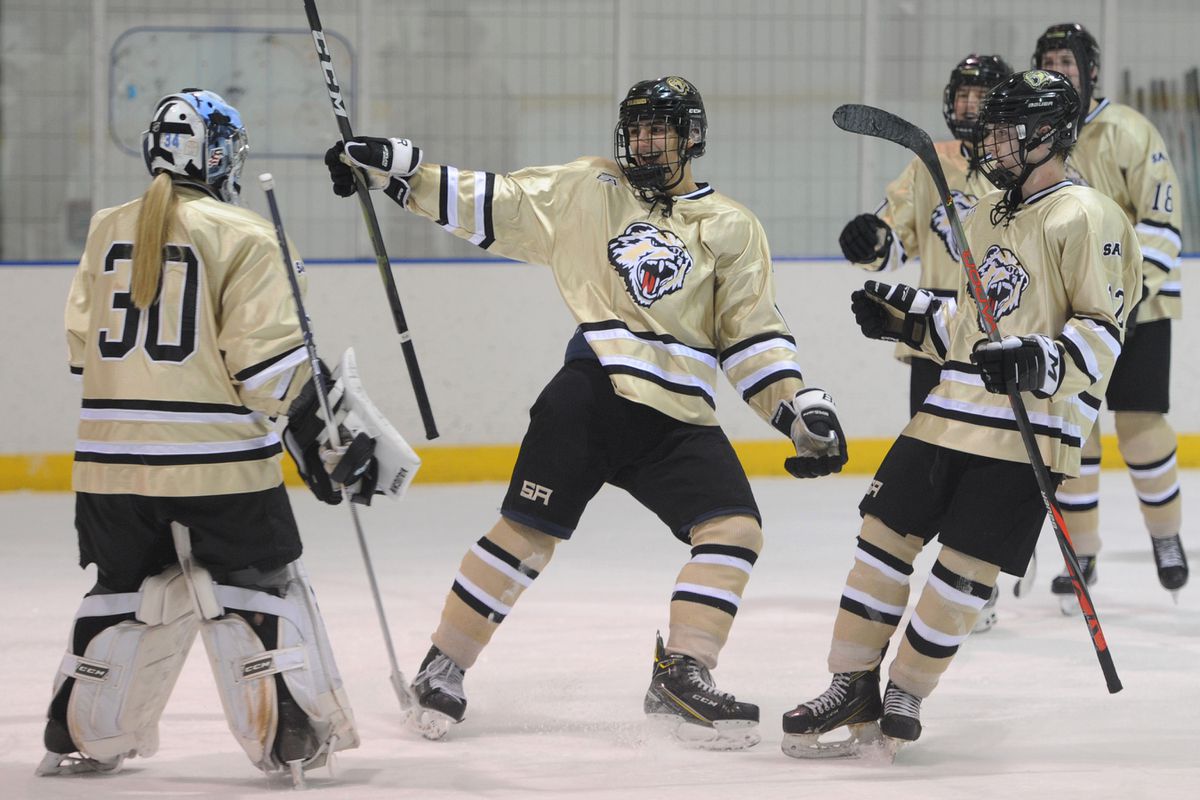 South goaltender Hannah Hogenson is congratulated by teammates after the Wolverines' 4-2 victory over the Dimond Lynx at Ben Boeke on Tuesday. (Bill Roth / ADN)

South goaltender Hannah Hogenson is congratulated by teammates after the Wolverines' 4-2 victory over the Dimond Lynx at Ben Boeke on Tuesday. (Bill Roth / ADN)

A packed house was treated to a battle between unbeaten high school hockey teams Tuesday night at Ben Boeke Arena, where the South Wolverines scored the game’s final three goals to hand the Dimond Lynx a 4-2 loss.

“It was a great hockey game,” said Dimond head coach Dennis Sorenson. “Ben Boeke was full, it was loud, and it was entertaining.

“We had a great start, got up one to nothing, hit a crossbar, which if that would’ve went in, the game might have changed. I thought we had a good first period and they took it to us in the second period and from there we were scrambling after that.”

South scored twice in the final two minutes of the second period and added an empty-net goal in the game’s final minute to hand Dimond its first loss in 10 games.

The Wolverines improved to 5-0 under first-year head coach Sam Olsen, who took over a state championship team that is rebuilding after the loss of nine seniors.

“It’s nice to see the team start to actually practice what we’ve been preaching, doing the little things right and doing whatever they can in order to get better,” Olsen said. “We’re trying to push these guys to higher levels of hockey and by practicing the way that you want to play, it starts to come through in the game.”

Dimond held leads of 1-0 and 2-1, but Donald tied it 2-2 with a little more than two minutes remaining in the second period. Fox gave the Wolverines the lead for good when he scored less than a minute later.

“I crashed the net and I was there for the rebound and put it in,” said Fox, who also registered an assist in the win. “We’re practicing on tipping and I could never do it right, but I got the rebound and scored."

South took control of the game in the final period, showing speed and aggressiveness against a fatigued Dimond team that is nearing the end of a jam-packed month.

Dimond, which dropped to 3-1 in the Cook Inlet Conference and 9-1 overall, was playing its fourth game in six days and its 10th since Nov. 5. Last week the Lynx traveled to Fairbanks for three nonconference games.

“We had an unbelievable November," Sorenson said. "We had way too many games for the start of the year. ... It’s been tough on us. We’re tired.”

The Lynx showed energy early, dominating the first period and taking an early lead on a goal from Jehovan Flores off an assist from Henry Minich.

South responded in the final minute of the period with a game-tying goal from Gerken off assists from Hayden Cox and Trevor Monahan.

Though Dimond regained the lead 1:27 into the second period when Brenden Anaruk assisted Teague Porter’s goal, the Lynx didn’t get another shot on goal the rest of the period.

South outshot Dimond 24-15 — Hannah Hogenson had 13 saves for the Wolverines and Hunter Katness had 20 for the Lynx — and scored its first goal while shorthanded.

“We’ve just been working on ways in which we can direct the puck," Olsen said. "We don’t need to sit back, we just need to make sure that we’re putting the puck in the areas where we want it to go. It’s a team effort and guys work hard. All of the penalty killers are doing the right things and they’re being rewarded for it.”