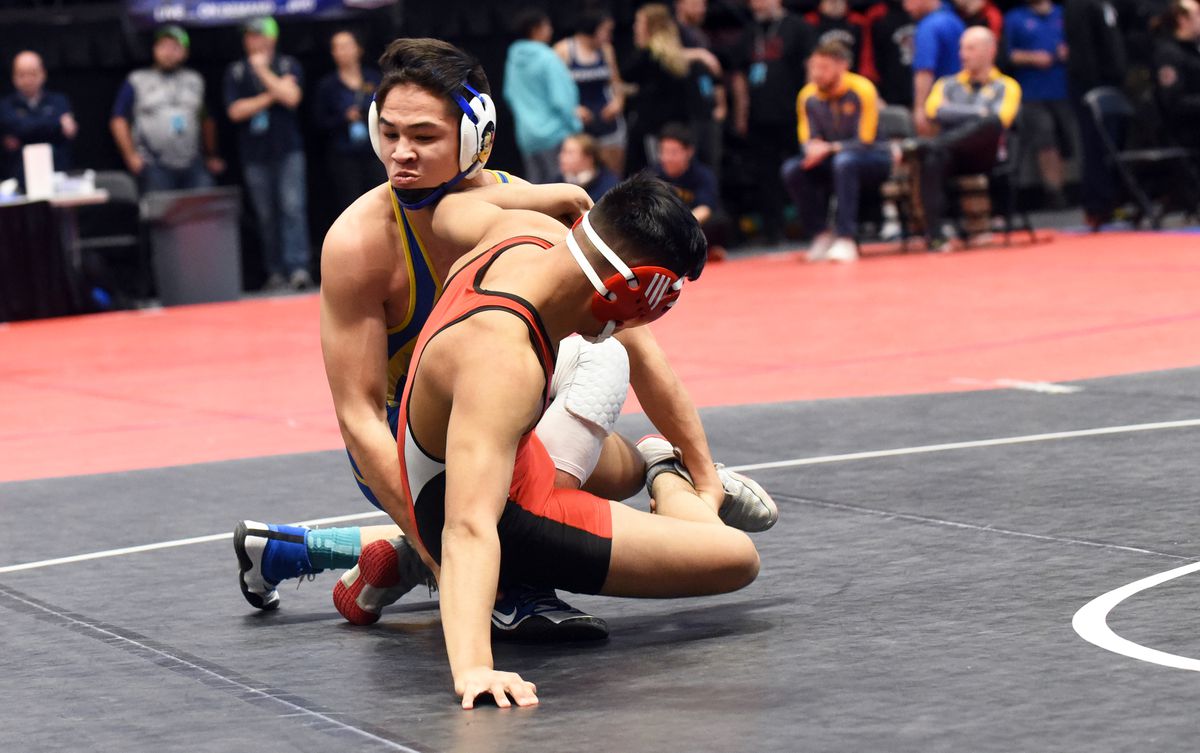 Without looking at the nearby scoreboard, Hayden Lieb knew he was about to hear the glorious shrill of the final whistle of his storied Bethel High wrestling career.

A win by technical fall and a historic fourth individual state championship were Lieb’s to cherish. When the 160-pound championship match ended Saturday evening at the Alaska Airlines Center, Lieb jumped to his feet and flashed four fingers in all directions. His win capped an undefeated season and made him one of only 16 Alaska high school athletes in history to pull off a four-peat.

“Definitely something you have to work for,” Lieb said seconds after running his record to 28-0 with a 15-0 victory over Kole Sperl of Petersburg. “I’ve been wrestling since I was 4, and from eighth grade to now, almost nonstop.

“It really is something special.”

Lieb, who recently signed a letter of intent to wrestle at NCAA Division I Wyoming, won titles at 160 pounds as a senior and junior, at 145 pounds as a sophomore and at 132 pounds as a freshman.

“I’m excited to wrestle for (Wyoming) and I hope (it) is just as excited about me,” Lieb said. “I look forward to bringing my top game.”

[Team of the decade? Consider the Bethel Warriors wrestling squad]

Lieb is the 14th Alaska boy to capture four straight titles and the second from Bethel to do it, joining Thomas Dyment (2014-17). Two girls have also won four titles.

During the lead-up to his match, Lieb paced near the mat wearing head phones. The T-shirt worn over his singlet was royal blue and gold — Bethel’s colors. On the back, it read “ON THE HUNT.”

Lieb looked to be alone in his private world of mental preparation — that is, until teammate Nelson Evans closed out his state championship in the 135-pound class. The headphones came off and Lieb jumped for joy like a maniac, forgetting for a moment his chance to make history was nearing.

“I love my team and I love supporting my school,” he said.

He gave himself a hearty yell of “WOOOO" as he jogged out of the arena into a nearby hallway, where he tried to best understand his accomplishment.

“But it’s going to take some time to really sink in,” he said.

Weight-watchers get ready to gorge

In the moments following Macarius Floresta’s quarterfinal victory at the Division I state wrestling championships Friday, the Colony High senior who wrestles at 215 pounds was feeling satisfied.

“This makes me so happy,” he said after pinning Wasilla’s Jeffrey Palmer in 4 minutes, 35 seconds. “I’m right where I want to be.”

By Wednesday, the wrestling season will be over and Floresta — who finished second in his weight class — will again be right where he wants to be. It will be time for Christmas dinner, and he will cozy up to the dinner table with knife and fork in hand, ready to do some quality eating for the first time in a while.

“If Christmas came before state, let’s just say I’d make my plates with some smaller portions,” Floresta said. “With wrestling over, I’m going to scarf down everything I see.”

Ice cream tops the list of food that will soon find its way into his diet. Same goes for Newhalen freshman Aileen Lester, who placed second in the girls’ 130-pound weight class.

“I try to eat healthy most all of the time,” Lester said. “But I’ll find that ice cream when this is all over because I haven’t had it in a long time.”

Wrestlers usually have to lose weight, or at least watch it closely, during the season. That makes proper nutrition a important part of their lives.

“We all do our best to eat the right foods, nothing that would get you out of shape,” Floresta said. “There are all kinds of junk food we’d like to have. But after a few weeks of working out, my mind goes to the foods that taste good and get you in shape.”

South junior Loke Iese, another 215-pound wrestler, is set to enjoy a holiday double-dip on Christmas. Wednesday is also his birthday.

“So yeah, traditionally I eat a lot on that day,” he said.

Newhalen sits 230 miles southwest of Anchorage at the mouth of the Newhalen River and on the north shore of Lake Illiamna. The village boasts a population of 182.

The three girls are among more than 600 wrestlers competing in three divisions at the Alaska Airlines Center. Hundreds of spectators are also on hand.

“It’s quite a bit different, although I’ve wrestled at some large tournaments,” Lester said. “Here, the crowd is all around you and people in the stands are yelling.

Lester learned she was the top seed in her weight class near the beginning of championship week. She got the news from Ed Lester, her dad and coach.

She wound up No. 2 after losing 4-3 to Ketchikan’s Hayley Gibson in Saturday’s championship round.

Lester isn’t the kind of athlete to get caught up in seedings. Soon after pinning Homer’s Alicia Bianchi in 1:37 in the championship quarterfinals, she wasn’t exactly zeroed in on what came next.

“I’m always asked, ‘Who are you wrestling next?’” she said. “I don’t know. Some girl from somewhere. That was literally my answer a few minutes ago.”

State wrestlers have to meet specific criteria to be considered for seeding in a weight class (there are 14 classes for Division I and II boys and 10 for girls).

“At Division I, you have to have a 51% winning percentage and at least eight matches,” ASAA executive director Billy Strickland said. “At Division II, a 40% winning percentage, and at the girls level we are not requiring a percentage yet because a lot of those girls wrestle against boys during the regular season, and a win-loss record may not be a true indicator of their talent as a wrestler.”

Technology plays a monumental part in organizing the brackets. ASAA relies on trackwrestling.com to initially seed the tournament based on statistics provided by coaches and other research. After the initial seeds are posted the Sunday before the championships, teams and coaches have a few days to email challenges to a small committee before the final seedings are announced.

“Ultimately, the best kid is going to win each weight class,” Strickland said. “But you want, at least, to make the semifinals and finals kind of a clash of the best kids.”

With 38 weight classes to seed, Strickland was proud to say ASAA received only eight challenges to the initial seedings.

“Generally, we have a very good system,” he said.

For the uninitiated, the meet is a sight to behold. There was constant action as competition took place on eight mats in spectacular rapid-fire fashion Friday. On Saturday, the championship matches were contested under spotlights on three mats, with Division I finalists on one mat, Division II finalists on another, and girls on a third.

“Wrestling has its own version of organized chaos,” Strickland said.

As the state finalists warmed up Saturday, officials cleared the center mat so the 2019 Alaska Wrestling Hall of Fame class of inductees could be recognized.