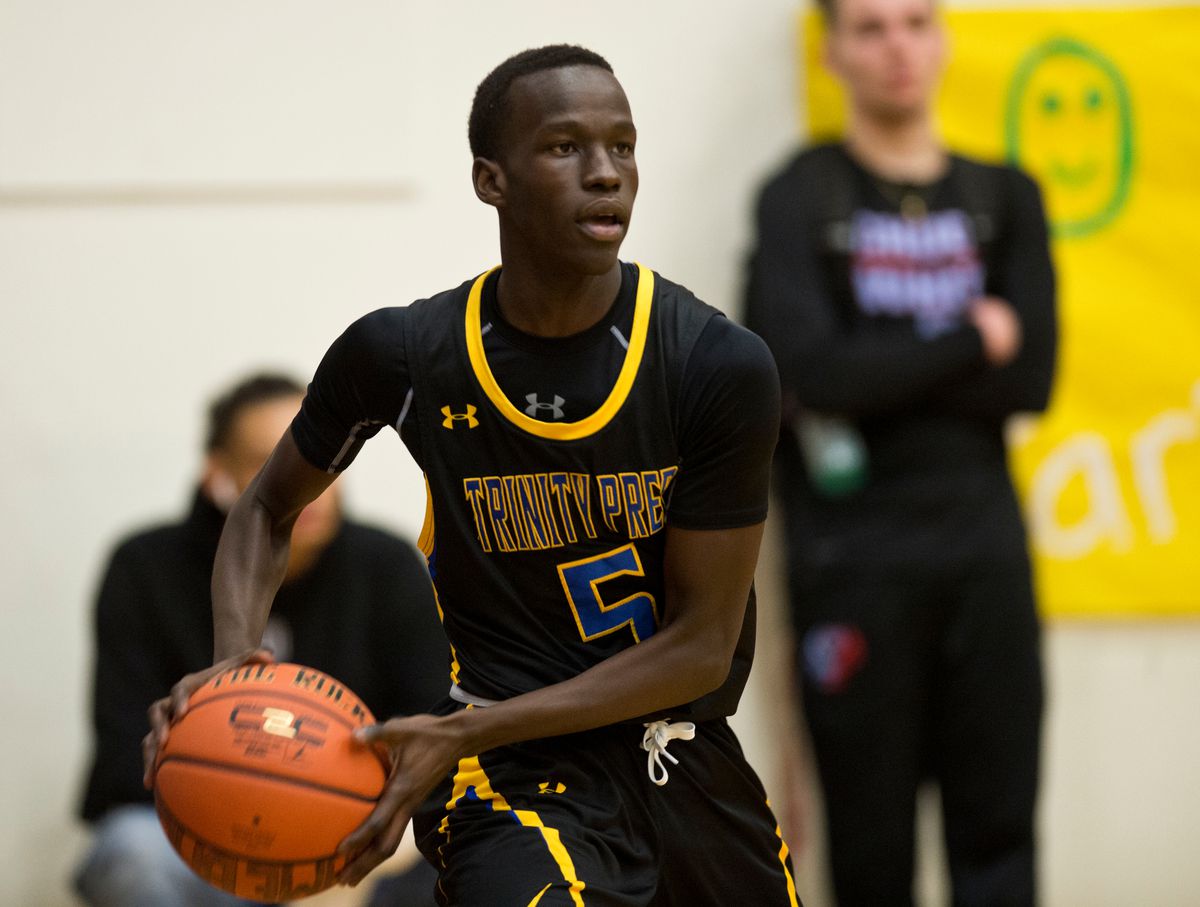 Daishen Nix, the Alaska-grown basketball phenom who became a high school superstar after moving to Las Vegas, made a triumphant return to Anchorage on Thursday.

And for that he can thank a teammate who is also from Anchorage.

Madit Mou, a junior who plays with Nix at Trinity International, poured in 18 points and hit a couple of huge 3-pointers to help the Thunder outlast the Colony Knights 65-58 in the first round of the Alaska Airlines Classic at West High.

Nix is the tournament’s headliner — a five-star senior who is headed to UCLA and was named to the prestigious McDonald’s All-American team earlier Thursday.

He scored a game-high 20 points and flashed his considerable skills when he made three steals off the dribble early in the first quarter. But he got into early foul trouble, drawing his third in the first minute of the second quarter, and sat for the rest of the half and much of the third quarter.

That opened the door for his teammates, Mou in particular.“I was real nervous at first, but something clicked in my head and everything started feeling good,” said Mou, who went to Central Middle School and spent the first semester of his freshman year at West High before joining Nix in Las Vegas.

“I felt real comfortable in the second half," he said. "I looked at my sister in the stands, and I didn’t want to disappoint her.”

Mou, who said he averages about five points a game, had the game of his life. He drained four 3-pointers, many from well behind the arc, to give Trinity a boost while Nix was sitting on the bench.

Fans will get two more chances this week to see Nix and Mou in the tournament, including Friday in a 5:30 p.m. semifinal game against the Dillard Panthers of Fort Lauderdale, Florida.

Dillard pulled away from the East T-birds in the third quarter for a 68-54 victory in the second of four games Thursday. Dimond defeated Barrow in the late game 75-46.

Dimond got 25 points and a lights-out first quarter from senior guard Isaiah Moses, who played with Nix when both were with the Alaska Gold AAU program. Moses knocked down three triples as part of a 14-point effort that carried the Lynx to an early 21-14 lead.

The Lynx stretched their lead in the second quarter, with Moses adding nine more points and Isaiah Grant scoring eight of his 14 to give their team a 45-22 halftime lead.

In the Trinity-Colony game, the Knights were often the better team. They led 29-25 at the half and were up by one point in the third quarter when Nix came off the bench to ignite the Thunder.

Nix quickly fed Mou with a cross-court pass that led to a 3-pointer and then scored the game’s next six points to put Trinity up 48-41 going into the fourth quarter.

The East-Dillard game showcased a premier player in Jalen Haynes, a 6-9 post who pumped in 34 points for the Panthers, many of them coming on dunks. East countered with 35 points from Hasaan Herrington, a 6-2 guard.

East finished the first half strong and trailed by five at the half, but Dillard outscored the T-birds 12-3 in the opening five minutes of the second half. East struggled against Dillard’s zone defense and had the ball stolen at least three times early in the third quarter.

“We knew the big kid (Haynes) was going to give us trouble but it was the easy baskets we gave up in transition that made the difference,” East coach Chuck Martin said.

White is the only coach to win Classic titles with two different teams — he coached East to the 1992 championship, and 18 years later he coached West to the 2010 championship.

Martin said none of this year’s T-birds are very familiar with White — or, for that matter, former T-birds great Trajan Langdon, who went on to play for Duke and the Cleveland Cavaliers.

And now there’s Nix, born in Fairbanks, raised in Anchorage, and brimming with talent while playing for Mears Middle School and the Alaska Gold club program.

Though he spent nearly as much time on the bench with foul trouble as he did on the court during his Alaska homecoming, Nix was all smiles after the game as he signed autographs and spoke with old friends and new fans.

“I see familiar faces in the crowd,” he said. “Since the start of the season, I’ve been waiting to come to Alaska.”