He’s on the path to big-time college basketball, but Daishen Nix and Anchorage haven’t forgotten each other 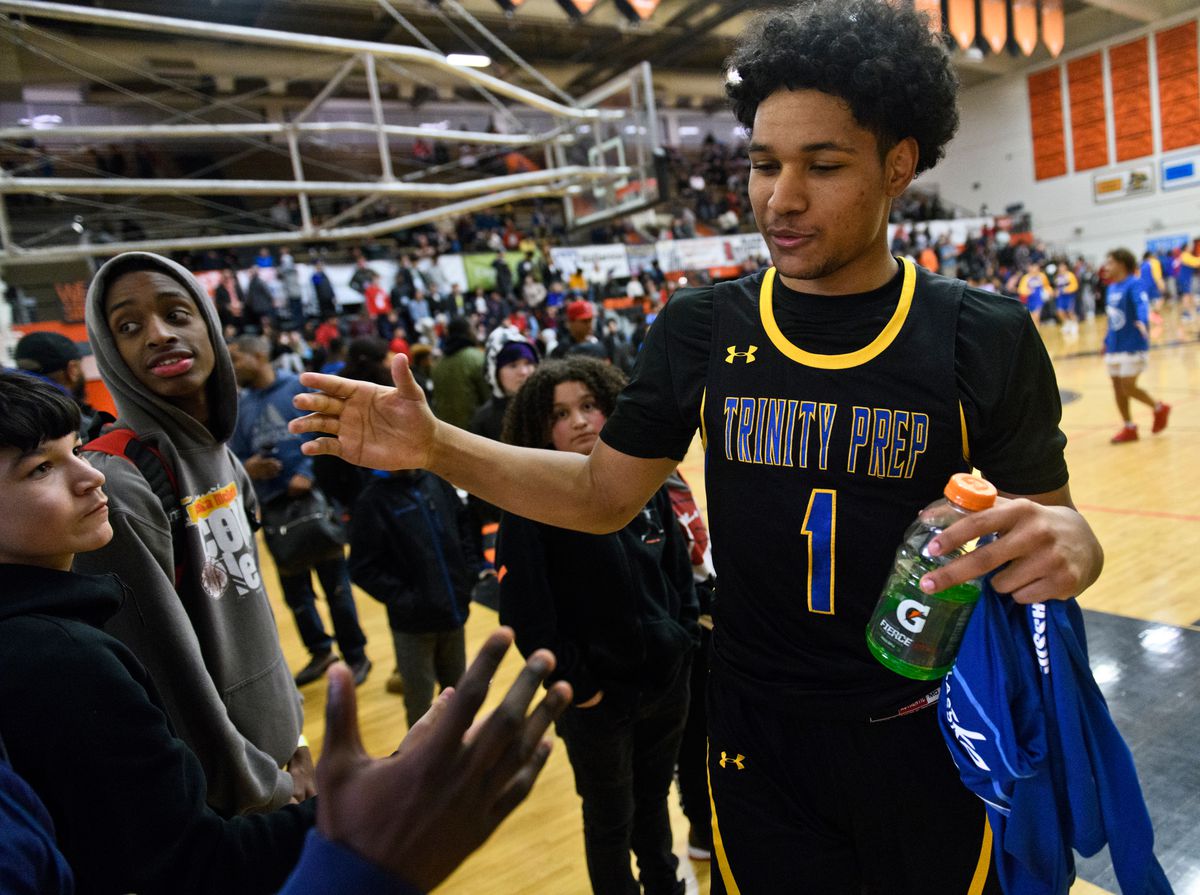 Daishen Nix is greeted by people as he walks off the floor at West High School after a Thursday game at the Alaska Airlines Classic. (Marc Lester / ADN)

Daishen Nix is greeted by people as he walks off the floor at West High School after a Thursday game at the Alaska Airlines Classic. (Marc Lester / ADN)

The sweatshirt is fairly new, as is Barney’s interest in UCLA. He’s a new Bruins fan because he’s an old Daishen Nix fan.

Barney works for the Boys & Girls Club, which is how he met Nix — the UCLA-bound point guard who was born in Fairbanks, raised in Anchorage and made famous in Las Vegas.

Nix, a 6-foot-5 senior, returned home to play in the Alaska Airlines Classic with his Trinity International team, filling the West High gym with people eager to get a look at the kid rated by many as the nation’s top high school playmaker. On the opening day of the tournament, he was named to the McDonald’s All-American team, a rarity for Alaska-grown players.

Nix was still in grade school when Barney got to know him through Boys & Girls Club basketball. Even then, Nix was good enough and big enough to be playing with seventh and eighth graders, Barney said. The talent was obvious even then.

“Anyone could’ve seen it,” Barney said.

[In a Classic finish, Trinity beats Dimond despite 42 points from Isaiah Moses]

And there was more to Nix than sheer talent, he added: “He was the hardest worker out there.”

Unfortunately for Alaska fans, Nix spent much of Trinity’s first two games at West High sitting on the bench with foul trouble. In Thursday’s 65-58 win over the Colony Knights he sat for 13 minutes, and in Friday’s 47-46 win over the Dillard Panthers of Florida he sat for 15 minutes.

Nix made the most of his 19 minute of playing time Thursday, scoring 20 points on 7-of-12 shooting while adding four steals, three steals and one assist against three turnovers.

He was less productive in his 17 minutes Friday, scoring six points on 3 of 4 shooting with four rebounds, one assist and two turnovers. He missed the front end of a one-and-one with nine seconds left, allowing Dillard a last-second shot. Dillard’s Jalen Haynes missed the shot and was called for an offensive foul.

Off the court, Nix was often surrounded by fans wanting autographs and selfies and old friends wanting to reunite.

After Thursday’s game, a cluster of people waited 10 or 15 minutes before outside the Trinity locker room waiting for Nix. When the door opened, Trinity coach Greg Lockridge stepped out and took in the scene.

“My name is Daishen Nix. How can I help you?” he said playfully.

When Nix emerged, he welcomed everyone with a smile and the cheerfulness of somebody who is used to drawing a crowd.

“It happens multiple times, that I’m the center of attention,” Nix said, sounding honest, not cocky.

Nix is the star of a Trinity team that spends the season traveling to tournaments like the Classic, where his presence often draws a crowd. As a five-star recruit, he spent his junior year and much of his senior year being wooed by many of the nation’s top Division I teams before picking UCLA.

Heady stuff for a 17-year-old, but Barney said the attention hasn’t gone to Nix’s head.

“He’s everything you’d want your son to be,” he said, “and your daughter to marry.”

Helping to keep Nix grounded is his family and his team.

His mom is Mina Tupuola, who played basketball at Lathrop High in Fairbanks and went to college at UAF.

“They keep telling me my name is still up there (at Lathrop),” she said. Because she was a top scorer? “No,” she said. “I was the mean one.”

After Nix finished the eighth grade at Mears Middle School, Tupuola moved her family to Nevada, in part to give her son more opportunities to advance in basketball.

“I think I took the right path,” she said.

Tupuola was delighted to be back in Anchorage for the first time in four years and to see her son play in the place he grew up. Nix still identifies as an Alaskan — “rage city made,” says his Twitter profile — and Tupuola still has plenty of connections here. Among them: West High coach Josh Muehlenkamp, one of her classmates at UAF.

Muehlenkamp said he used to always see Nix’s grandfather at UAF’s student recreation center. “He was a great man,” Muehlenkamp said of Ben Tupuoka, who died in 2016 in Las Vegas.

In Las Vegas, Nix lives with seven of his Trinity teammates in coach Greg Lockridge’s home. Lockridge lives on one side of the house, and the players live on the other.

“We have to fight for the bathroom all the time,” Nix said. Players are assigned daily chores — kitchen duty, bathroom duty, garbage duty, etc. — and the arrangement helps keep them humble.

They spend much of the basketball season on the road. Lockridge, the architect of the basketball program at Trinity International School, said the team isn’t affiliated with any Nevada high school conferences and plays most of its games on the road at tournaments like the Classic. After they leave Alaska, the Thunder will head to tournaments in Kentucky, Arizona and Ohio, he said.

On Friday afternoon, Lockridge took his team to Dimond High for the school’s Spirit Olympics, a 70-minute assembly filled with crazy competitions between seniors, juniors, sophomores, freshmen and faculty. Lockridge said he was glad his players, especially Nix, got a chance to be there. Trinity is a small school with maybe 100 kids, and the atmosphere at the Dimond assembly is something Nix had never experienced, the coach said.

Nix sat near the top of the bleachers with his teammates, taking in the raucous scene below.

Midway through the assembly, Dimond basketball coach Brad Lauwers got on the microphone to recognize Nix’s selection to the McDonald’s All-American team, noting that Nix had lived in Dimond’s boundaries before he moved to Las Vegas.

Lauwers also recognized Dimond senior Isaiah Moses’ nomination to the team. Moses, a 6-foot guard, was among 100 players nationwide nominated for the team, and Nix was among 24 who made the final cut and will play in the McDonald’s All-American game.

Back in middle school Nix and Moses both played in the Alaska Gold AAU program, and they probably would have been high school teammates if Nix hadn’t moved. On Saturday night they took the court as opponents for the championship game of the Alaska Airlines Classic.

Nix said he’s been waiting all season to come back home and play in Anchorage, where he was greeted warmly. He may suit up for a Las Vegas team, but he’s Rage City made.