After losing a tiebreaker, Dimond Lynx regroup to shut out Chugiak in CIC hockey tournament 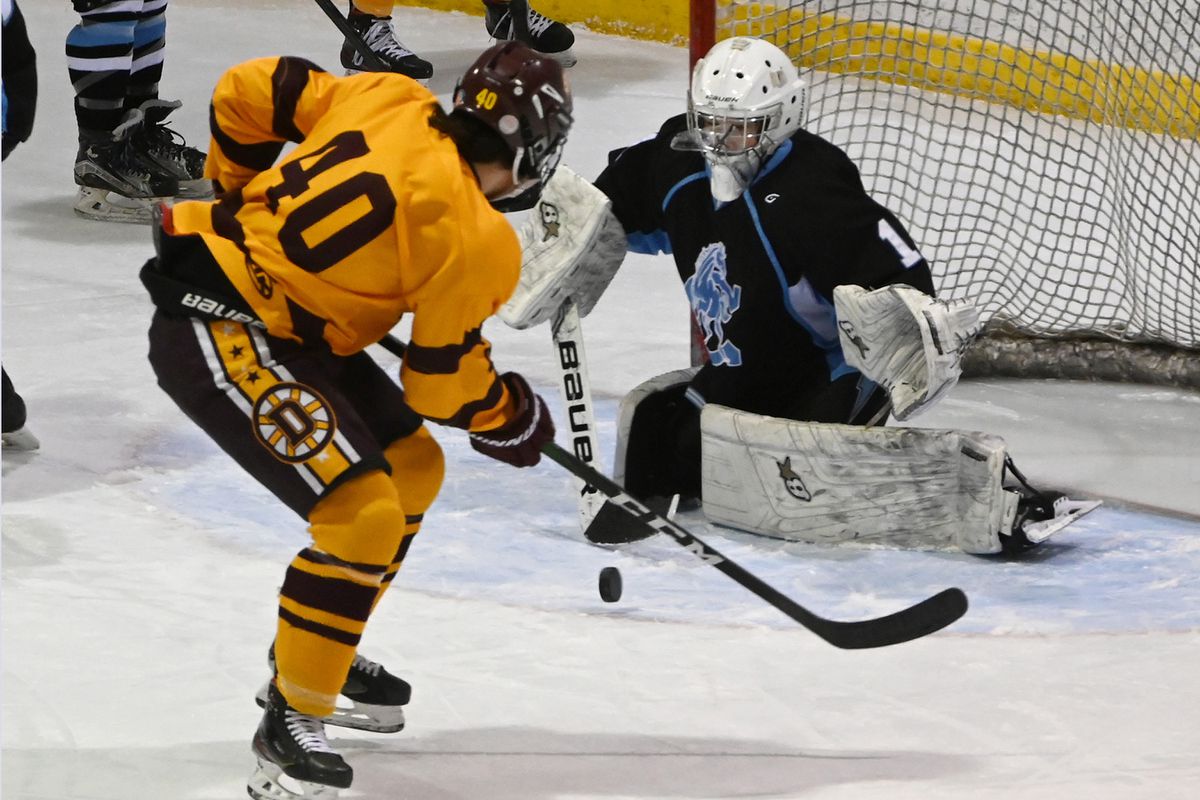 A muddled mess of superiority atop the final Cook Inlet Conference standings put the Dimond High hockey team in a mildly precarious position Tuesday. Because the Lynx lost a tiebreaker to South, they wound up as the No. 3 seed for the CIC tournament, so instead of getting a bye all the way into the semifinals they had to face off against sixth-seeded Chugiak in the quarterfinals.

A never-in-doubt 6-0 victory over the Mustangs offered Dimond the chance to breathe easy by night’s end. With the win, the Lynx planted themselves firmly in next week’s Division I state tournament.

“When we learned we had to play this game, it came as a bit of a shock,” said team captain Tyler Graeber, a senior defenseman. “We didn’t expect to have to play (Tuesday), but we had a good practice (Monday), a good warm-up today, got going early, and it really helped us out.”

The Mustangs dropped to 13-10-0 and can still qualify for the state tournament by winning Friday’s fifth-place game against Service (9-14-0). The Cougars fell 3-2 in overtime to Eagle River at the McDonald Center on Tuesday.

“We were all prepared for the big upset, but also knew we might not get through this game (on top),” said Chugiak senior forward Luke Momblow. “Now, we just have to stay fresh and stay healthy.

“We just want to get in to state, that’s the end goal. It’s really all that matters. Once we get in, anything can happen.”

The eight-team CIC will send five teams to DI state for the second year in a row. By claiming the No. 1 and No. 2 tournament seeds, West and South automatically qualified for state.

West won the CIC regular season with a 12-1-1 record and 25 points and will face fourth-seeded Eagle River in Thursday’s tournament semifinal at Boeke.

South and Dimond tied for second place with 11-2-1 marks and 23 points, a tie broken by each team’s conference record against West -- South was 1-1-0, Dimond was 0-1-1. That gave South the tournament’s second seed and a bye into Thursday’s semifinal at the McDonald Center, where they will face Dimond.

“It is a very competitive league on the top end,” said veteran Dimond coach Dennis Sorenson. “This time of year, a hot goalie or a dumb penalty changes a whole game.”

Once Sorenson and the Lynx learned how the tiebreaker shook out, they stilled themselves for Tuesday’s quarterfinal.

“I think it added stress to the coaching staff,” Sorenson said. “A couple sleepless nights, game-film review of Chugiak and some disappointment dropping all the way to third.

“... We had an intense, hitting practice (Monday) and we don’t usually hit in practice," he said. "We had to have preparation ready for the black-and-blue Mustangs. That’s the way Chugiak has played forever, a culture (it) has and they came out and crushed us. Regardless of score, we were also able to hit back tonight.”

The Wolves (13-8-1) punched their ticket to state when Brooks Christian scored at 1:33 of the eight-minute overtime period. Tay Kurpius assisted on the game-winner and also scored in the second period.

Looking ahead to Friday’s fifth-place tilt for a state bid, Service beat Chugiak twice in the regular season. The Cougars won 4-3 on Jan. 16 and 7-5 on Jan. 28.