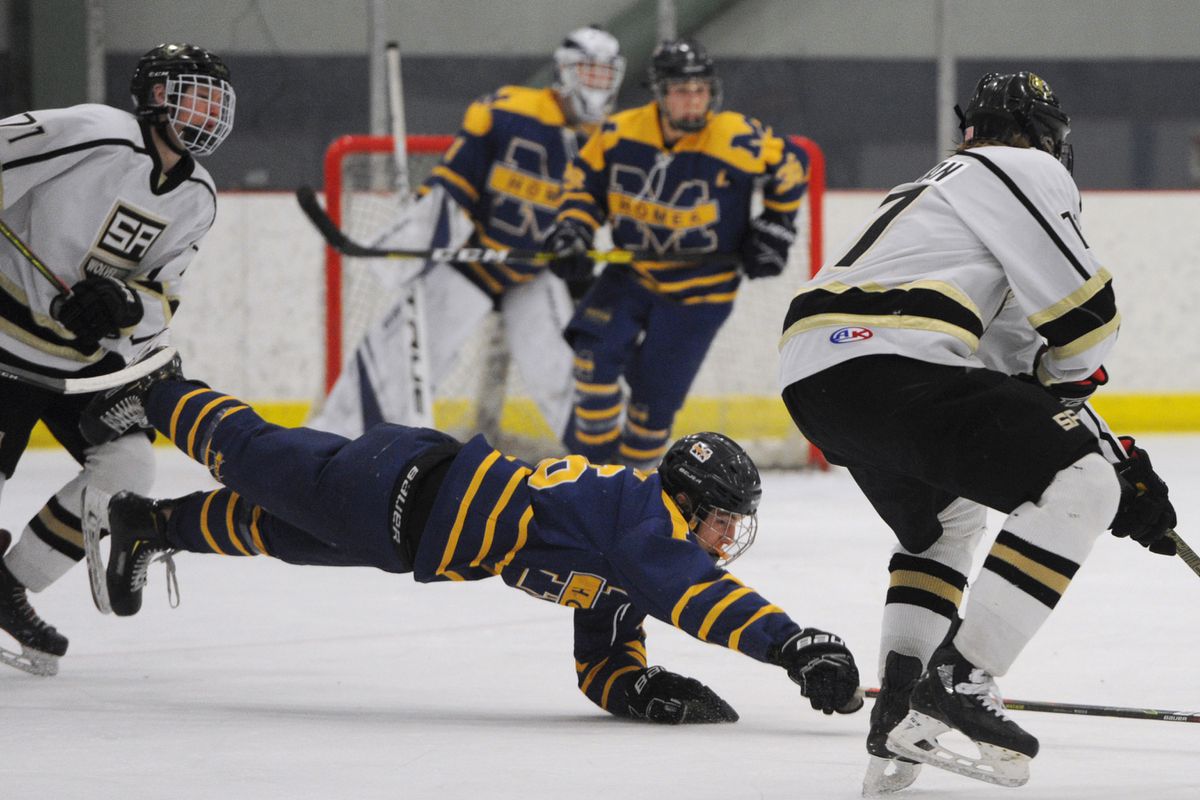 Homer senior forward Ethan Pitzman reaches for the puck during the South Wolverines' 4-2 quarterfinal victory over the Mariners during the state hockey tournament at the Menard Center in Wasilla on Thursday. (Bill Roth / ADN)

Homer senior forward Ethan Pitzman reaches for the puck during the South Wolverines' 4-2 quarterfinal victory over the Mariners during the state hockey tournament at the Menard Center in Wasilla on Thursday. (Bill Roth / ADN)

WASILLA — By game’s end, South High had properly cashed in and moved on to the semifinals of the First National Cup Division I state tournament.

However, major credit should go to Homer for showing the Alaska high school hockey community what playing — and playing well — with house money is all about. Crowned the Division II state champs less than a week ago and subsequently awarded a berth in this week’s tournament for bigger schools, the Mariners acquitted themselves quite well against the defending state champion Wolverines.

South captain Hayden Fox broke the tension filling the Menard Memorial Center on Thursday afternoon with an empty-net goal with 34 seconds remaining in the game, cementing the Wolverines’ 4-2 victory in the tournament quarterfinals.

“That was a real big stress-breaker right there,” Fox said of his late score. “It proved how important it was for us to stay on them in their end. It’s what you’ve got to do to win.”

South will take a 19-3-1 record into Friday’s semifinal against Colony, which surprised second-seeded Dimond 3-2 in double overtime. The other semifinal will pit top-seeded West, which beat Service 6-1, against Wasilla, which upended Eagle River 7-4.

This year marks the second time the Division II state champion filled a spot in the eight-team Division I tournament. Last season, South thumped Division II champion Palmer 10-0 in the first round and the Moose mustered one goal the next day in a consolation loss.

On Thursday, the Mariners proved worthy of the challenge. Sophomore goaltender Keegan Strong muscled up and made 33 saves to earn player-of-the-game honors for his squad, sophomore Kazden Stineff scored Homer’s first goal in the second period, and senior Alden Ross then made things deliciously interesting when he scored unassisted at 2:22 of the third..

“We’d been in some similar situations throughout the season. But we knew this would be a much tougher game," Ross said. "We just didn’t show up enough early.”

Indeed, South throttled Strong in the first 15 minutes while only allowing Homer a single shot. Strong made 15 saves in the opening 15 minutes.

“Generally, the more shots I get, the better I play,” said Strong, who made 40 saves in Homer’s 4-1 win over Soldotna last Saturday in the Division II championship game in Fairbanks. “I felt comfortable because I knew what (South) was going to do.”

When Ross scored early in the third to make it a one-goal game, South appeared rattled. Forty-eight seconds later, the Wolverines called timeout and assessed the situation.

“We came out so strong, but the momentum went away when they popped one in,” Fox said. “It’s happened to our team on more than one occasion during the season.

“We had to regroup. The message was that we must keep things simple.”

The Wolverines did that masterfully. They essentially played an effective game of keep-away to limit Homer’s possessions.

“A lot different than our Division II opponents,” Ross said. “South did a great job of passing the puck.”

Homer dropped to 20-3-1 overall and 4-2-0 versus DI teams. It’s worth noting that some of the Mariners play comp hockey with Anchorage players — Fox said Homer’s Ethan Pitzman and Phinny Weston play on his comp team.

“I’d never played Homer before and have so much respect for them,” Fox said. “It’s odd playing them coming off a state title. They obviously had some oomph and felt good about themselves.

“Thankfully, we were able to get past them.”

While disappointed to lose, the Mariners know there will be a First National Cup championship trophy at the school when they return home.

“Waiting for us at our home rink,” Strong said.

Junior Kaden Ketchum whacked in his own rebound from in front of the net at 7:31 of the second 8-minute overtime to complete his hat trick and lead the seventh-seeded Colony Knights to a 3-2 upset of second-seeded Dimond.

“I was so out of gas at the end of the first overtime,” Ketchum said. “But the second OT seemed to go by in a minute. I’m just glad it’s over.”

As for the goal? Chalk it up to right place, right time.

“There was a lot going on,” Ketchum said. “I just put it in there.”

Ketchum’s heroics were matched by those of Colony sophomore goaltender Bryant Marks, who finished with 44 saves.

“(Marks) is something else,” Ketchum said.

Colony, which also upended the Lynx in the first round of the 2017 state tournament, improved to 15-5-0.

Teague Porter and Kaden Daniels scored goals for Dimond, which fell to 21-4-1.

West improved to 21-1-1. Each skater on its top line — Chase Solberg, Matthew Patchin and Ian Keim — scored a first-period goal.

Service sophomore Morgan Pagels ruined Simpson’s shutout at 14:26 of the third with a power-play goal. Schyler Garrity and captain Jaden Sarber picked up the assists.

Wasilla held Eagle River scoreless for all of the second period and for the first nine minutes of the third period to give the Valley two semifinal teams.

The game was tied 2-2 after one period, but Wasilla took charge in the second period with goals from Garrison Holler and Holden Wiltfong.

With about six minutes left in the third period, Eagle River cut the gap to 4-3 on Tucker Lien’s second goal of the game. The Warriors answered 32 seconds later with a goal from Langston Rouma, and about two minutes later Randall scored his second goal of the night for a 6-3 Wasilla lead. The teams traded goals in the final two minutes.