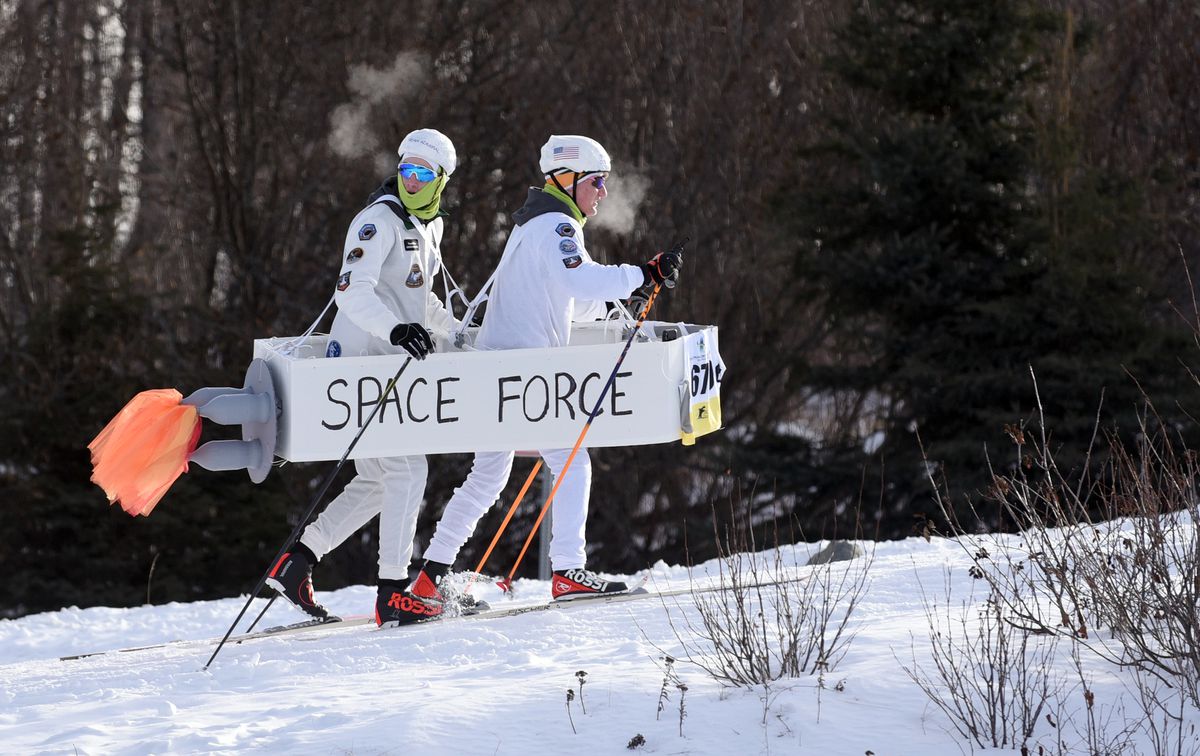 Darth Vader and the Space Force shared sunshine with the Mario Brothers and Winnie the Pooh on Saturday when Kincaid Park transformed from a world-class ski venue to an otherworldly winter wonderland filled with the motliest crew of cross-country skiers you’ll see this side of Santa’s Workshop.

The costumes are a tradition at the East T-Bird Classic, an annual high school relay race that’s long on spirit but short on seriousness. Saturday’s mixed relay event featured a backward handoff, an uphill slalom and a gnarly jump that sent a number of skiers into the air.

There were two T-Rex’s, a ton of tutus and a Grinch who stole the spotlight. In short, it was the kind of day where the kids of the Cook Inlet Conference got to be, well, anything other than kids.

“It was the last day of skiing, I wanted to do something fun,” said Dimond’s David Kim, who skied the 3.5-kilometer loop wearing a bulky inflatable dinosaur costume.

Kim even managed to land the jump feature — something Bartlett’s Luke Lilly was unable to accomplish. Fortunately for Lilly, he was decked out in an entire suit of bubble wrap.

“I wanted to be the peak of safety,” Lilly said.

The jump drew throngs of spectators as skiers tried to outdo each other. Service’s Joel Power, dressed as a cheerleader, crashed and burned on his 360 attempt only to be upstaged seconds later by West’s Aaron Maves, who landed the exact same move while dressed as the Grinch.

The race was more beach party than ski race, with rock-and-roll pumping from the stadium’s sound system and the smell of chili in the air courtesy of the East High ski boosters. The sun even came out, lending a decidedly springtime feel despite temperatures in the mid-teens.

Eagle River’s Alex Carl and Jacob Heavener entered the race dressed as members of the Eagle River Bobsled Team and attached to each other via a cardboard cutout.

“It was really hard to coordinate” their strides, Heavener said.

The duo credited teammates Mary Goodwin and Laura Ripp with coming up with the idea the night before the race.

"We were just the labor,” Carl said.

Another tandem squad that drew a lot of attention was Service High’s “Space Force,” made up of Garvee Tobin, Maya Brubaker, Matthew Terry and Hayden Ulbrich. Tobin said skiing together with Brubaker was relatively easy — until it wasn’t.

“The jump was so scary,” she said.

In the end, Tobin said the event was a welcome break leading up to next week’s state high school championships Thursday through Saturday at Kincaid.