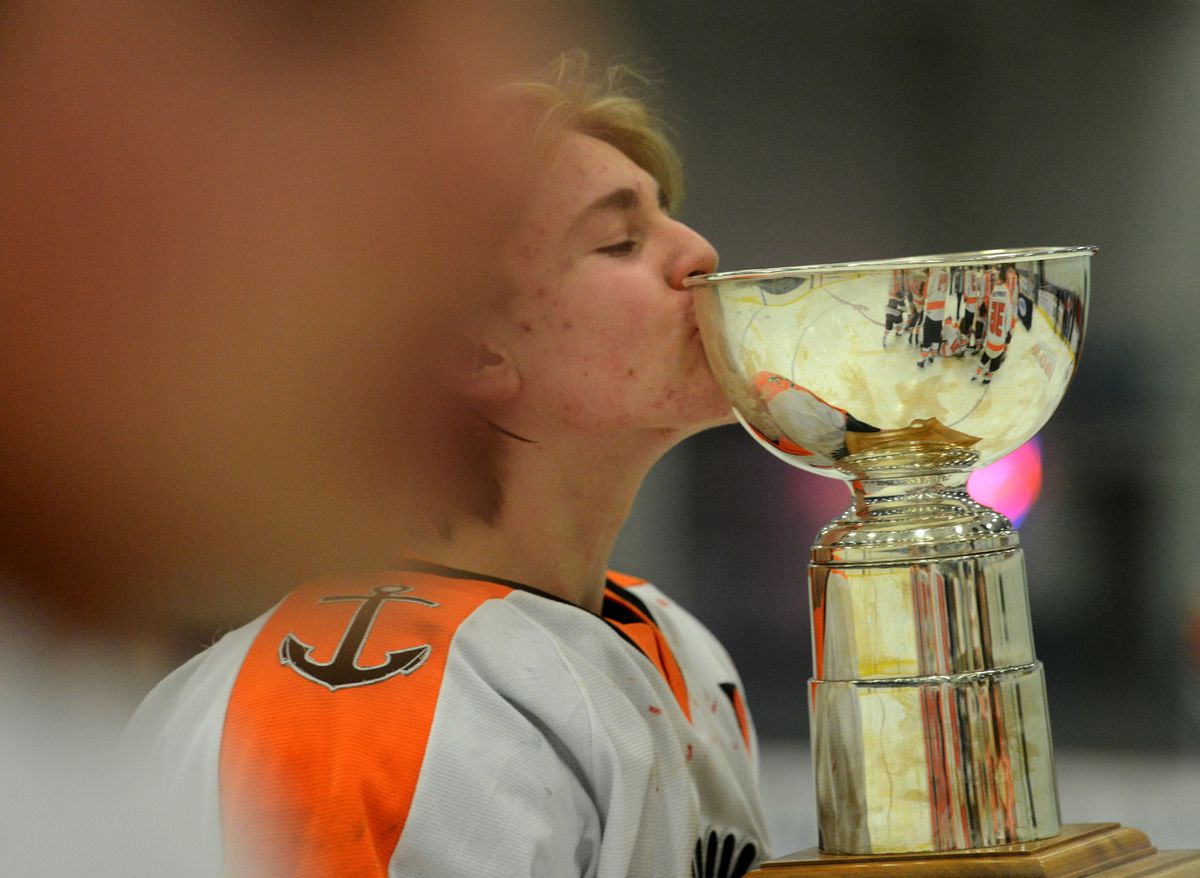 WASILLA — In the 38th edition of the state high school hockey tournament, the West Eagles capped a nearly perfect season by winning the state championship game with a thrilling overtime victory.

Junior Matthew Patchin scored off a beautiful centering feed from sophomore Ian Keim at 4 minutes, 40 seconds of the second overtime to propel the Eagles past defending champion South 4-3 Saturday at the Menard Center.

Patchin’s second goal of the evening gave the Eagles their only lead of the game, and their fourth large-school championship.

“Right when (the puck) went in, I didn’t think it did,” Patchin said. “I thought I missed the net. Then I saw it ring around the net and I was just in shock.

“I was so tired. I didn’t realize what happened for a little bit.”

Stands to reason. The same five skaters -- Patchin, Keim and seniors Chase Solberg, Ethan Pickett and Nicko Opinsky, who had three assists -- played the majority of the night’s 57 minutes and 40 seconds.

Senior goalie Will Simpson stopped 28 shots, including 12 in the third period. He did his part and West’s frazzled five found a way to do the rest.

“I wouldn’t have it any other way, it was absolutely horrible,” Keim said of the fatigue factor. “I feel like I’m going to pass out right now. My legs are so dead.

The game was the third this season between the teams. West won the first meeting 6-1 in December behind Patchin’s hat trick. On Jan. 15, Logan Orr assisted twice and Hannah Hogenson made 11 saves in South’s 3-1 win.

Hogenson, a senior who is headed to Bemidji State to play Division I women’s college hockey, brushed aside 17 Eagles shots on Saturday.

South led the entire game until West tied it with less than two minutes left in regulation on Solberg’s second goal. Twice the Wolverines led by two goals, 2-0 and 3-1.

“We got up and tried to stay positive the whole time,” said South senior Jack Kleven, who scored his team’s third goal at 12:42 of the second.

“It was just a great game. West battles so hard. We cut down on our shifts and bench, too. Those five (West) guys are the right five guys. But this group right here is great as well. One lucky bounce and it could’ve been ours.”

It was the fifth time the large-school state championship game was decided in overtime. The longest title game in Alaska history came in 2003, when Service outlasted Dimond 2-1 in four overtimes. Service beat Dimond 5-4 in three OTs in 1983, beat East 3-2 in two OTs in 1993 and lost to South 4-3 in two OTs in 2008.

The tail end of the first period featured a fantastic flurry of action.

South captain Hayden Fox broke loose down the right wing and throttled a wrist shot through Simpson at 9:05. Hogenson made a dynamic left-leg pad save on Keim’s breakaway at 11:26 and Wolverines defenseman Caleb Huffman made it 2-0 with a goal from the left point at 12:36.

West cut the lead in half on the game’s first power play when Solberg took a lethargic centering pass and feathered the puck high over Hogenson’s left shoulder at 14:21.

Kleven’s goal gave the Wolverines a 3-1 lead after two periods, and Patchin scored on a shorthanded breakaway early in the third to trim the South lead to one goal.

The Wolverines were mere minutes away from icing the win with team defense, but Solberg struck again at 13:03 of the third period. On a broken play, he triggered a shot on goal off the right-wing boards. The puck eluded Hogenson and beat her to the far stick side. Officially credited with Keim’s assist on the game-winning goal, Solberg totaled two goals and two assists.

“We played through injuries and got it done,” said Solberg, who transferred to West following his junior season at East. “I love my boys. This is my family.”

In the game’s aftermath, Patchin weaved his way out of the South zone and ditched his helmet, stick and gloves in celebration before finding his teammates near center ice.

He said the Eagles achieved something special.

“I just want this to show that no matter how many players you have, the amount of effort you put is going to show no matter what,” he said.

Despite allowing two goals the final 2:05, Wasilla held on to beat its Valley rival for the third time in four meetings this season to earn third place.