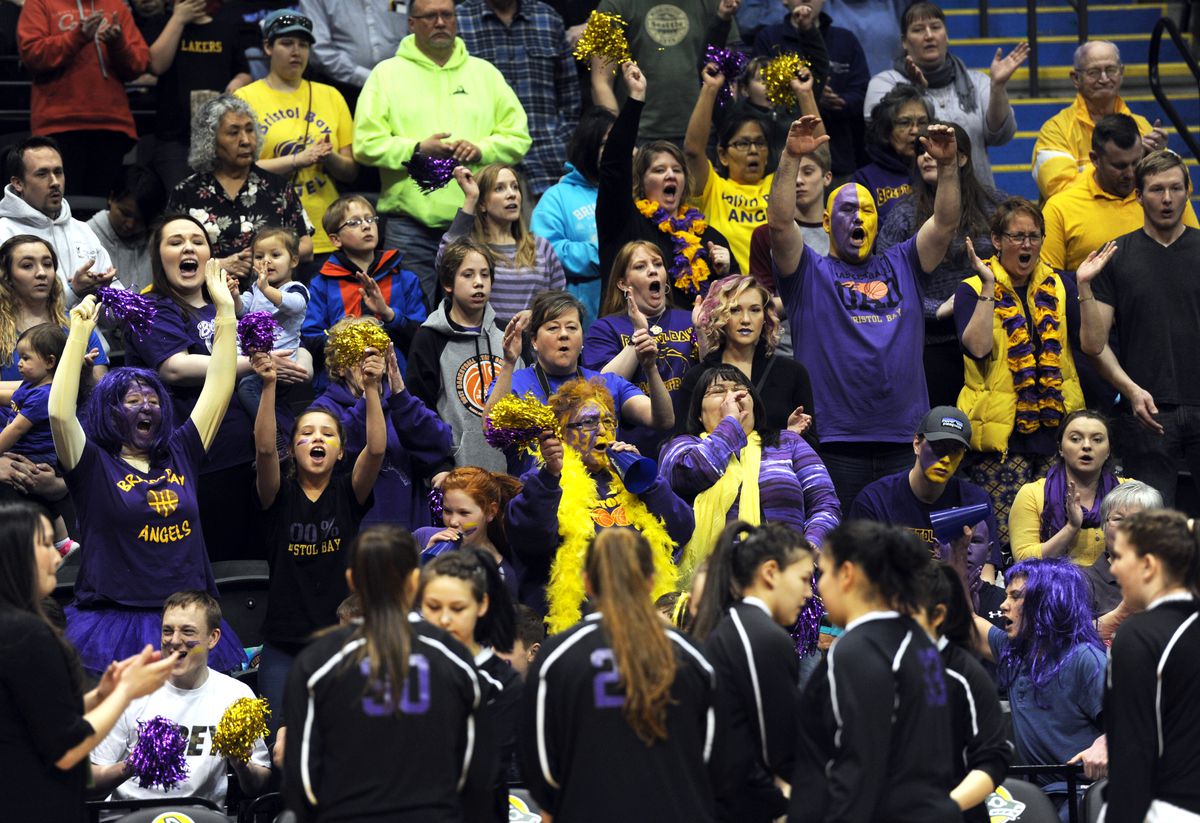 Bristol Bay fans cheer their team during the girls 2A championship game against Nenana at the 2017 March Madness Alaska state basketball tournament on Saturday, March 18, 2017, at UAA. (Erik Hill / ADN)

Bristol Bay fans cheer their team during the girls 2A championship game against Nenana at the 2017 March Madness Alaska state basketball tournament on Saturday, March 18, 2017, at UAA. (Erik Hill / ADN)

Alaska’s state high school basketball tournaments, scheduled to begin next Wednesday at the Alaska Airlines Center, have been postponed due to concern over the new coronavirus, the Alaska School Activities Association said Wednesday.

When or if they will be rescheduled — or canceled altogether — is uncertain, ASAA executive director Billy Strickland said.

“They could very well be canceled,” he said.

But, he added, “We shouldn’t rush to that decision. ... We don’t want to feel like we have to make a hasty decision."

Strickland said ASAA is viewing the postponements as a mandate by the state, and he said ASAA supports the state’s desire to contain the spread of the virus.

So far, there are no known cases of COVID-19 in Alaska.

“We are in total support of what the intent of this is — to not get the entire state of Alaska sick at the same time,” Strickland said. “... We don’t want to crown a champion and then have the whole state of Alaska get sick.”

Conference tournaments scheduled for this week — and there are many, being held all over the state — can go on as planned, Strickland said. Those include three happening in Anchorage at Anchorage Christian, Grace Christian and Dimond High.

The Fairbanks North Star Borough School District said Wednesday night that as an extra precaution it is canceling the Class 4A and Class 3A conference basketball tournaments due to start Thursday at North Pole High School.

However, Strickland said there’s a chance the CIC tournament could still go on, since the teams involved are already in Anchorage. The intent of the postponements, he said, “is to not get a bunch of communities together and then return home. ... I think that since the CIC is not (teams from multiple communities) they might still run that tournament.”

The Anchorage School District, whose schools are currently on spring break, did not immediately respond to questions about the CIC tournament.

The postponement and potential cancellation of the state tournaments will have far-reaching impacts. The tournaments are a major source of revenue for ASAA and contribute millions of dollars to the Anchorage economy, according to an study by the McDowell Group referenced by ASAA.

Thousands of people from nearly every corner of Alaska gather for the tournaments, collectively known as March Madness Alaska. The event consists of eight boys and girls tournaments in four divisions ranging from Alaska’s smallest schools in Class 1A to its biggest in Class 4A.

On Tuesday, Strickland had said the state tournaments were still on as scheduled, but said ASAA was communicating daily with state officials about the coronavirus.

In its health alert issued Wednesday, the state of Alaska recommends that people over 60, people with medical conditions such as heart disease, lung disease or diabetes and people with a fever or symptoms of an acute respiratory illness not attend this week’s conference tournaments.

ASAA also said it has canceled the Alaska Association of Student Governments’ Spring Conference, which was scheduled to be held April 3-5 at Mt. Edgecumbe High School in Sitka.