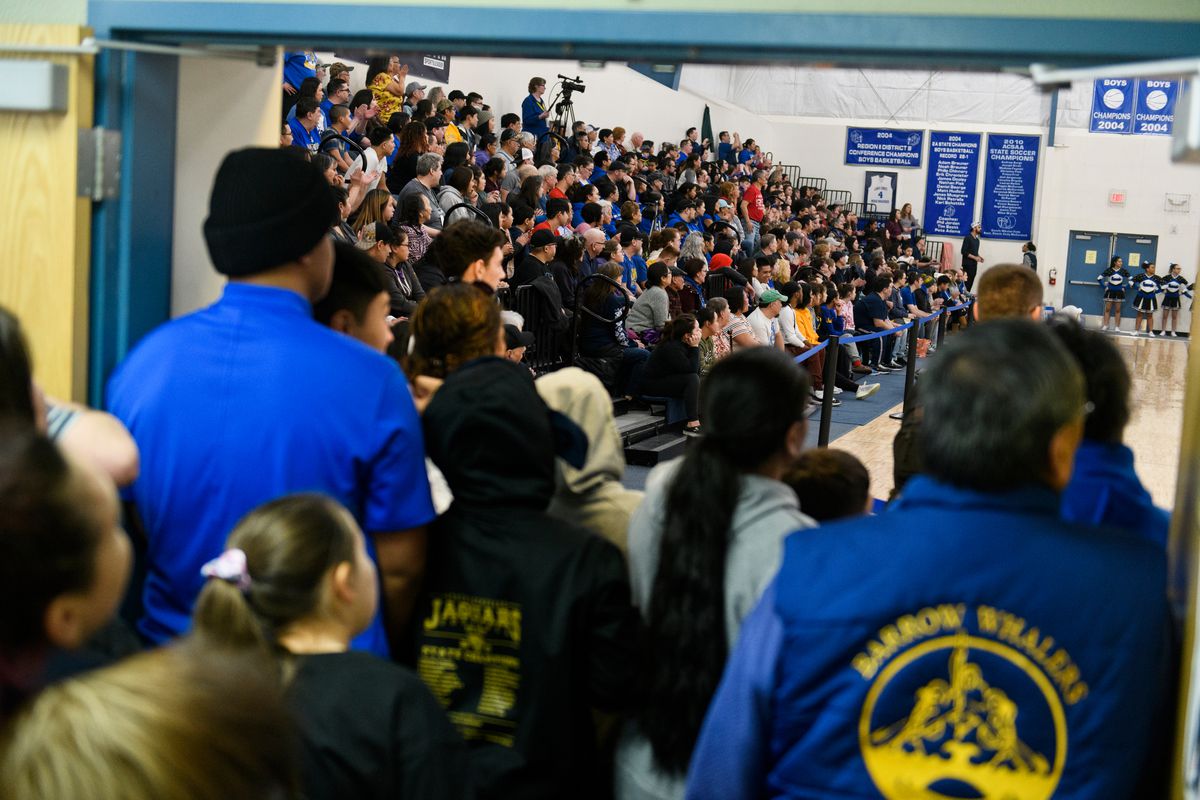 An overflow crowd fills the bleachers and the doorway at Lumen Christi High School as Bethel plays Nome in the Class 3A Western Conference tournament Friday. (Marc Lester / ADN)

An overflow crowd fills the bleachers and the doorway at Lumen Christi High School as Bethel plays Nome in the Class 3A Western Conference tournament Friday. (Marc Lester / ADN)

At the Class 3A Western Conference basketball tournament Friday at Lumen Christi High School in Anchorage, social distancing was not part of the playbook.

The single set of bleachers in the gymnasium was packed elbow-to-elbow for an afternoon game between Bethel and Nome. Players were fist-bumping on the court. The parking lot was overflowing and the school’s tiny lobby was packed with people waiting for the game to end in the hopes that bleacher seats would open up for the next game.

As he waited in the lobby, Derek Swanson of Kotzebue reached into his pocket for a tiny bottle of hand sanitizer.

“What can you do, right?” he said. “Take safety precautions and wash your hands.”

As Alaska and the rest of the world works to contain the spread of COVID-19, schools and public facilities are closing, events are being canceled and people are being urged not to get to close to each other for fear of catching or spreading the virus.

At ACS, hundreds of spectators on Thursday and Friday came to watch games involving teams from Anchorage, the Kenai Peninsula and the Mat-Su area.

At Grace Christian, there are teams from Point Hope, Unalaska, Unalakleet, Bristol Bay, Selawik and Dillingham, and Thursday’s first round of play was business as usual.

On Thursday, the gym was at full capacity, he said — about 500 people. On Friday, the parking lot and school were both nearly empty, even though games were going on.

“There’s a vocal group that has put in a lot of financial resources to be here and we’ve had parents express their displeasure,” Salima said. Others, he said, said they would follow guidelines suggested by state and national officials.

At Lumen Christi, teams from Barrow, Kotzebue, Nome and Bethel played in a gym that holds 575 and drew what looked like capacity crowds.

The tournament was supposed to be a three-day event at Dimond High, but when the Anchorage School District closed its facilities, it found a new home at a private school not affected by the ASD decision.

It was condensed into a single day, and fans showed up in big numbers Friday. Kathleen Navarre, the Dimond High athletic director who helps run the tournament, wasn’t surprised. She knows how much Alaska — especially rural Alaska — loves basketball.

John Warren, the Lumen Christi athletic director, said there was hand sanitizer available for teams, concession workers and officials. As the boys teams from Barrow and Kotzebue warmed up for their game, he said he wondered about what he called “the line between hysteria and common sense.”

“These people didn’t all just come back from spring break in the Far East,” he said. “They’re from villages.

“… They’re getting a game to close their seasons.”

Indeed, this week’s games in Anchorage and elsewhere are the last of the season in Alaska.

The Alaska School Activities Association on Saturday canceled the state high school tournaments, three days after postponing them on Wednesday.

“Ultimately sports (is about) teamwork and sacrifice, and this is coming down to a lot of sacrifices because we’re on the team of Alaska,” he said on Friday.

The tournaments, which last year drew about 32,000 people to the Alaska Airlines Center over the course of two weeks, are among the biggest gatherings in Alaska, Strickland said. He said that during a week that saw the suspension of myriad events worldwide, he became more fully aware of the reason to eliminate large gatherings of people in order to “flatten the curve” and hopefully avoid a sharp rise of COVID-19 cases that could overwhelm the health care system.

“That ‘flatten the curve’ really helped me understand what we’re trying to do,” Strickland said.

Sydney Gray, a cheerleader for the Bethel Warriors, said she came to Lumen Christi on Friday more concerned about the competition the Warriors would face than the coronavirus, although she said she has a heightened awareness of preventing the spread of disease.

“Now that there’s a case in Anchorage, I’m a lot more conscientious about washing hands and touching doorknobs and things,” Gray said. “But being a young and healthy age, personally I feel fine.”

This story has been updated with the cancellation of the state high school basketball tournaments.