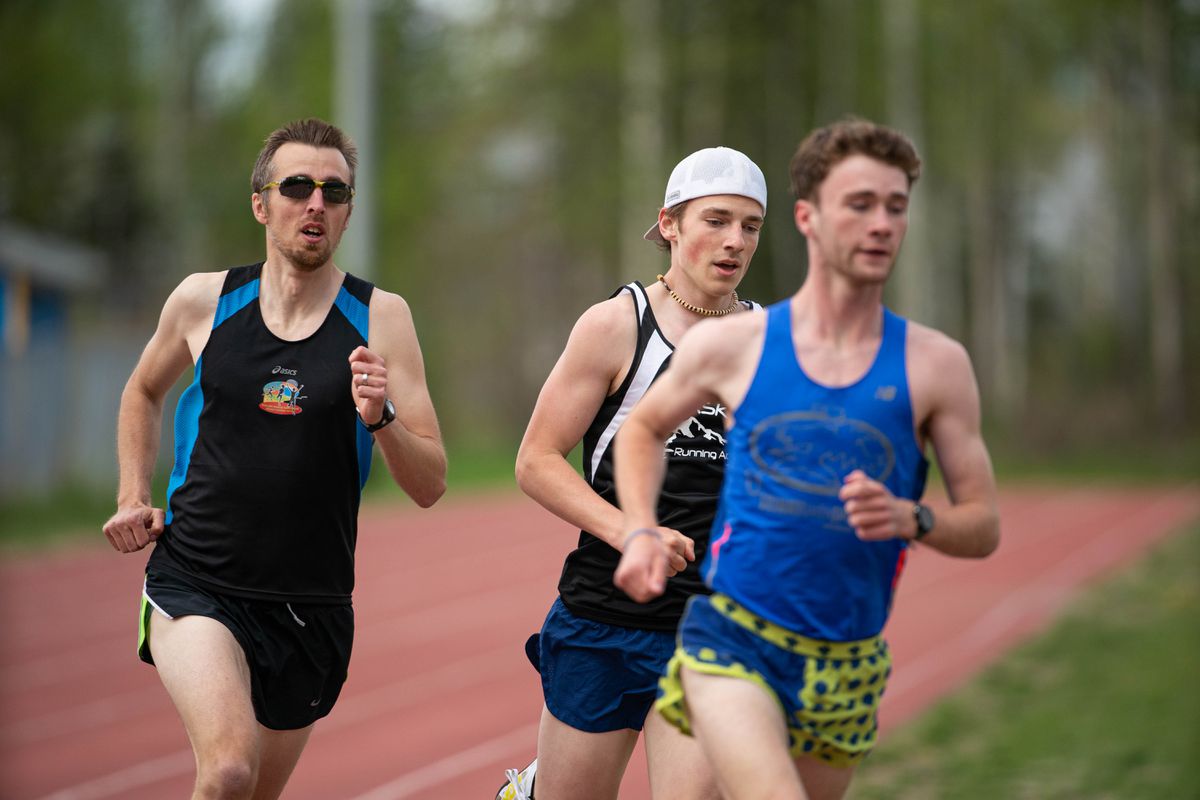 Tristian Merchant’s fake track season is over, but what he managed to accomplish in it is the real deal.

Merchant, a junior at Anchorage Christian School, broke the nine-minute barrier in the 3,200 meters in a time trial Saturday at Bartlett High, becoming what is believed to be the fourth high school runner from Alaska to hit that milestone.

Four days after clocking a time of 8 minutes, 59.07, Merchant returned to the Bartlett track — not in search of another personal-best, but to help a teammate reach one.

He paced ACS senior Kaleb Smith to a PR in a 1,600-meter time trial, looking relaxed while occasionally glancing at his watch or looking over his shoulder to see how far back Smith was. He finished a few meters ahead of Smith, who finished in 4:40.14.

“Our fake track season is over,” Merchant said.

Both time trials had the trappings of a real race. A starter’s pistol sent runners on their way and an automated timing system recorded the results.

Though unofficial because it didn’t happen at a real meet, Merchant’s 8:59.07 puts him in fast company. Only three other Alaskans — Levi Thomet, Trevor Dunbar and Don Clary — are known to have run sub-9:00 times while in high school, according to Marcus Dunbar, the retired Kodiak High School coach and unofficial historian of Alaska high school track.

“It’s definitely something to be proud of,” Merchant said.

Merchant did his Saturday time trial with Chugiak High runner Hyrum Nelson, who was coming off an injury, Merchant said, and clocked 9:30.44.

In his first seven laps, Merchant recorded splits ranging from 69.95 seconds on the first lap and 66.71 seconds on the second lap. His time after seven laps was 7:56.98, meaning he needed to run the final lap in 63.01 seconds to break nine minutes.

Merchant ran the speedy final lap under false pretenses. When Moe starting running the final lap with him, he told Merchant they needed to run a 64-second lap to hit the goal.

Moe said the final 200 meters made the difference. “I yelled at him, ‘You better not let an old man beat you,’ ’’ he said. “I was trying to make it a race atmosphere. That last 200 was the fastest 200 of his whole race.”

While head-turning in any circumstance, Merchant’s time is especially impressive given it came without the benefit of a track season.

“He hasn’t had any buildup races, and races are generally where you tune up for an amazing performance,” said Jerry Ross, a club coach and top Anchorage runner.

Merchant said he has been doing workouts with Dimond High runner Santiago Prosser since schools shut down and spring sports were canceled in late March.

“We did tempo (runs) on bike paths, and we did one workout on the little road behind the Walmart (in northeast Anchorage),” he said. When tracks cleared of ice, he took his workouts there.

Because high school coaches weren’t allowed to work with athletes while schools were closed, Moe provided Merchant with some written workout plans. Based on what he was hearing back, Moe thought Merchant was poised for a breakthrough.

“They were college-level workouts rather than high school workouts, and it was really impressive to get that feedback from him,” Moe said.

With his 8:59.07, Merchant joins Alaska’s short list of long-distance greats who have broken 9:00.

Merchant, who intends to run track and cross country in college, said he is hearing from coaches. Though it’s nice to have a sub-9:00 on his resume, he said there are other high school runners clocking times in the 8:40s.

For now, he’s looking forward to his senior year, which he hopes begins with fall sports in place so he can chase a third straight state championship.

The story has been corrected to reflect Don Clary’s converted time from a 1975 time trial.