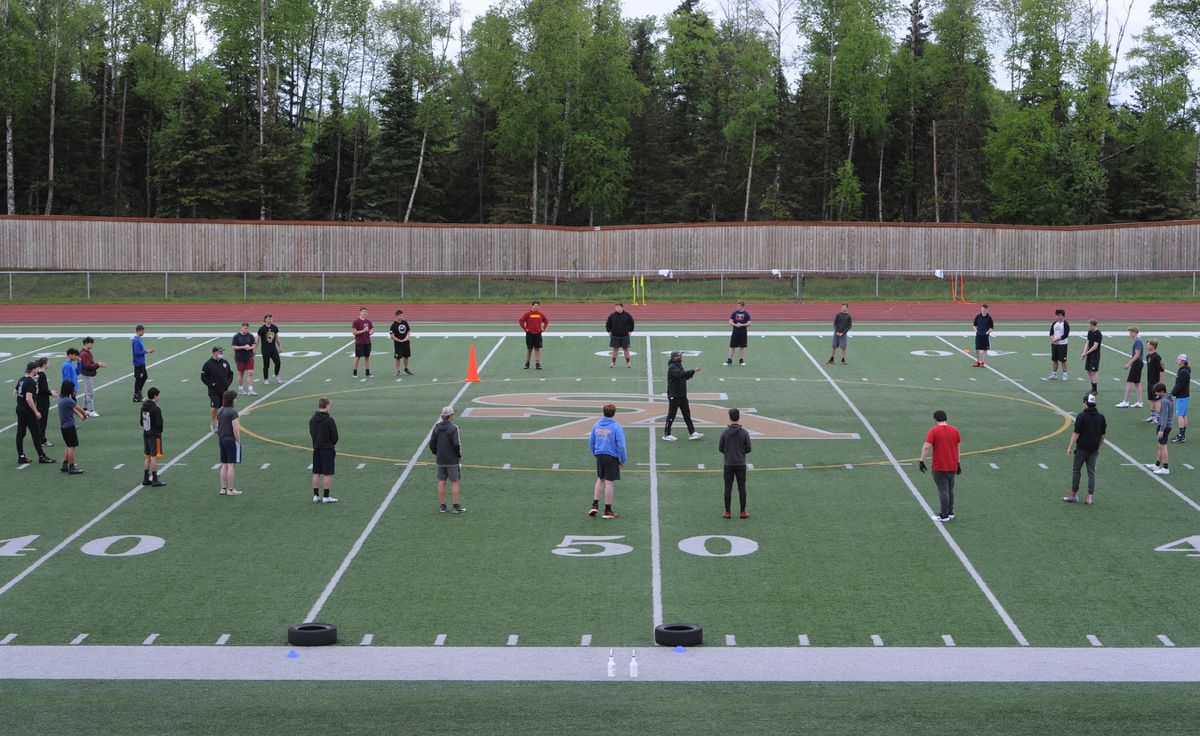 Football teams are practicing, schools are announcing plans to reopen and the governing body of Alaska high school sports says it plans to hold state championships in every sport during the 2020-21 school year.

But the novel coronavirus that forced the cancellation of Alaska’s state high school basketball tournaments in March and wiped out the entire spring sports calendar isn’t done yet.

The virus is spreading — a record number of cases was reported in Alaska on Saturday — and the executive director of the Alaska School Activities Association said he expects COVID-19 to impact students and sports teams once classes begin.

In an attempt to help lessen the risks and impacts, ASAA last week sent school districts recommended protocols for practices and competitions.

The goal is to ensure activities can continue despite the pandemic and to minimize the disruptions and disappointments.

“We want to do everything that we can do, safely,” ASAA executive director Billy Strickland said.

That might mean restricted travel. It might even mean no games, just practice. It won’t mean business as usual, and it certainly means being flexible and adaptable as the world is still learning about who and how COVID-19 attacks. Mitigation plans in place today might not be the ones in place a month from now.

“I told a friend the other day, I want to trademark the phrase ‘Ask me in two weeks,‘ ‘' Strickland said.

ASAA’s recommendations emphasize the need for social distancing and face coverings and call for temperature checks for all participants. In times of medium risk, which is where the Anchorage School District is right now, temperature checks are recommended for spectators too.

ASAA can only make recommendations to school districts, Strickland said, “because from a legality standpoint we can only go that far.” But, he added, the guidelines “put districts in a position where they need to follow them because of the increased liability if they don’t.”

In sharing the protocols with school districts, ASAA included information from a University of Wisconsin study that showed increased anxiety and depression among high school athletes during the pandemic.

ASAA is modifying some rules in an attempt to reduce risks. Among the changes: Football teams will be allowed to spread out 80 yards along the sideline — from one 10-yard line to the other — and volleyball teams will no longer switch benches between sets.

Strickland said it’s likely that a player or coach will test positive and a team will have to skip a competition. He said conferences should look at their by-laws now — and not on the eve of the playoffs — to decide how to handle standings and tournament seedings in the event a team isn’t able to play all of its regular-season games.

“We anticipate games being canceled, in which case we will consider those like weathered-out games — they’re not forfeits,” he said.

At state tournaments, players and coaches will go through temperature screenings. Strickland hopes ASAA will have access to tests with quick turnarounds so it can test anyone with a fever, and the rest of the team if needed.

“We foresee at some point where a team is going to have a positive test and they’re not going to be allowed to play,” he said. “I really feel bad about that, especially for the seniors — they do not get those opportunities back.

“We’ve also had a kid who rolls an ankle and doesn’t get to play. We’ve never had a situation where a whole team rolls an ankle.”

Fall sports are due to start in August. ASAA has classified some as Tier I sports that have lower risks because they are outdoors and don’t involve much physical contact, like cross country. Tennis and volleyball are classified as Tier II, a slightly higher risk level, because they involve shared equipment. Swimming straddles those two tiers.

At the Tier III highest-risk level are the two sports that require sustained physical contact — football and, later in the school year, wrestling. When school districts are at medium risk, ASAA’s protocols for Tier III competitions call for limits on the number of participants, although it doesn’t specify what the limits are.

Strickland said wrestling is a special concern because it’s a statewide sport that often brings teams from all over Alaska to a single gymnasium.

Far more Alaska schools field wrestling teams than football teams, especially in villages that have limited health-care capacities. Big tournaments have become a staple of Alaska high school wrestling, but Strickland said schools can mitigate the risk to wrestlers by replacing the popular big tournaments that draw 15 to 20 schools with dual meets or tournaments with only four or five teams.