Downsized state cross-country meet has Anchorage coaches up in arms 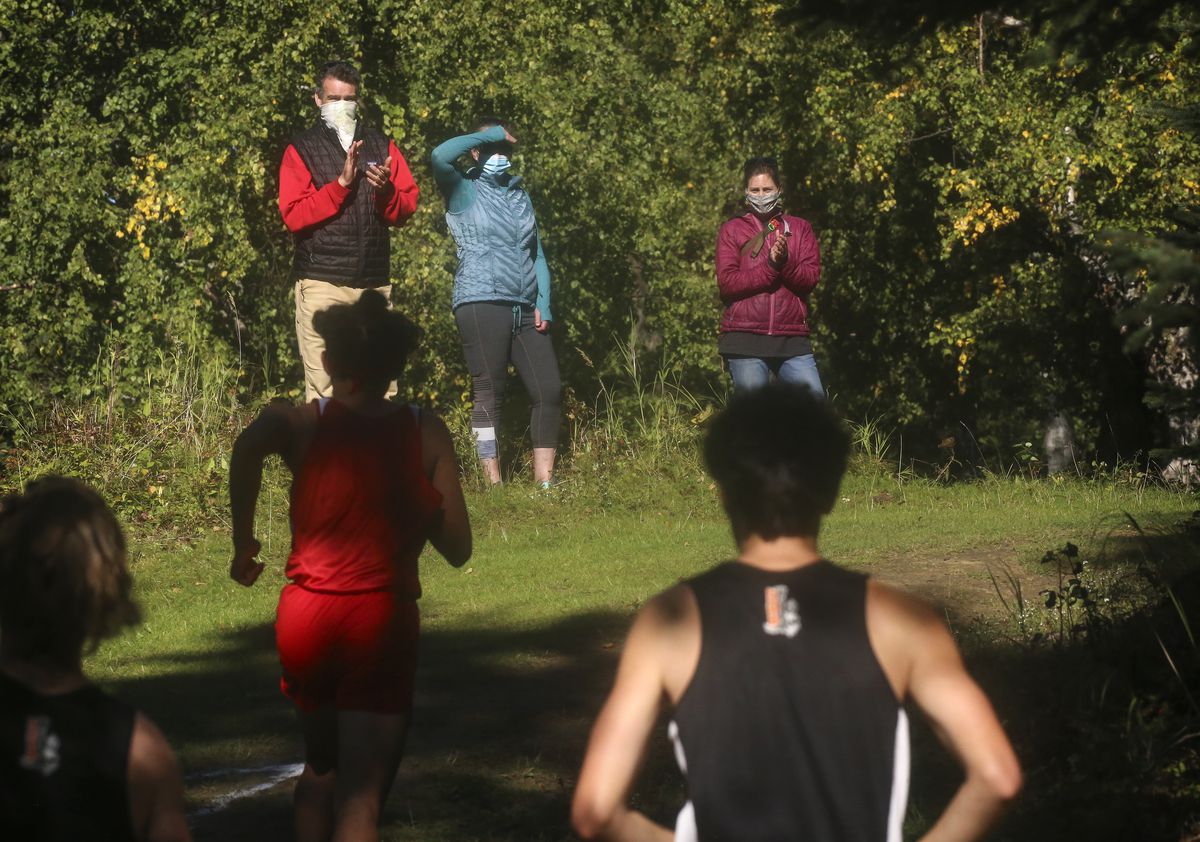 Early in September, the Alaska School Activities Association decided to limit participation at the state cross-country championships in order to reduce the risk of spreading the virus that causes COVID-19.

Instead of letting entire teams qualify for the Oct. 10 championships in Anchorage — home to the majority of Alaska’s COVID-19 cases — only individuals will qualify, ASAA’s board of directors ruled. No team titles will be awarded.

The plan will slice the number of participants by about 55%, from 460 last year to 208 this year.

A bid from Anchorage coaches to restore the meet to its normal size with COVID-19 mitigation plans in place was rejected last week by the ASAA board of directors, which didn’t give the proposal a hearing.

Coaches from Anchorage’s Cook Inlet Conference and some of the state’s other Division I schools have galvanized in an effort to change ASAA’s mind, at least for the Division I meet that attracts Alaska’s biggest schools. The state meet also includes championships for Division II mid-sized schools and Division III small schools.

Any change to ASAA’s plan would require an emergency board meeting, which would happen if five of the eight board members agree to meet, ASAA executive director Billy Strickland said.

“I don’t really see the board wanting to, but never say never,” Strickland said. “They’ve rejected (a bigger meet) twice.”

Last week’s rejection came with no discussion. Megan Hatswell, the Region IV board member who represents Anchorage schools, attempted to bring the proposal to the table but her motion wasn’t seconded, Strickland said.

“No discussion makes me feel there was a decision made prior to the meeting,” Chugiak coach Brian Kruchoski said.

ASAA’s reasons for limiting the size of the meet are twofold, Strickland said. It wants to limit crowds at the venue and it wants to limit the number of people traveling to Anchorage and potentially taking the virus home with them.

Cross-country coaches are particularly perplexed because at the same meeting, ASAA approved a football playoff format that will require inter-district travel after the first round. Some small schools like Seward have rosters that number less than 20, but bigger schools can have at least twice that many athletes, plus coaches and administrators.

A full cross-country team includes seven runners. If a school qualified both its boys and girls teams, the number of runners would be 14.

“It’s just kind of a head-scratcher.”

In a letter to ASAA, Dimond coach Nate Normandin noted that a smaller field is contrary to ASAA’s mission statement, which says: “Strengthen student wellness, academic and social development by advocating equitable participation and fostering healthy competition for ALL Alaska students.”

“Taking away state berths in any year is not OK, but especially in a pandemic when (good) mental health and activities is what are needed,” she said. “These kids have lost a lot over the last seven months. We could be giving them their entire event. This is an unfair move when we can make the state meet safe and not cut kids.”

One thing at issue is the format of the meet, which has tentatively been moved from Bartlett High to Kincaid Park, which has a bigger start/finish area and enough trails to set a single-loop course.

A modified mass start will preserve competitiveness and race strategy, Strickland said. “You lose a lot of that when you run a time-trial,” he said.

One of ASAA’s idea is to group runners by teams at the start line, with each team separated by 6 feet. Lanes would be marked for the first couple hundred yards — 200 if the race is at Kincaid, 150 if it’s at Bartlett — and runners would stay in those lanes before merging into one group. By then, ASAA believes, some natural distancing will have occurred.

“Everything we’ve been told to do this season we’ve done — stay 10 feet apart, wear masks — and I’m wondering why ASAA put forward a plan where we’ll have 32 runners from across the state all lined up shoulder to shoulder,” Kiskaddon said.

"We’ve had people talking to (Alaska chief medical officer) Ann Zink, running our plan by her to make sure we don’t make any proposals that jeopardize the student-athletes or the coaching staff or any volunteers or spectators who show up. We know how to run a safer, more inclusive meet.

“Not only did ASAA’s plan sound like it flew in the face of the best mitigation practices, it also cut 200 athletes.”

Anchorage coaches say 17 of the 18 Division I coaches are in favor of a regular-sized meet, with West Valley the lone exception. Strickland said he’s heard from administrators in a number of districts who favor a smaller meet. Messages sent Friday to the Fairbanks and Mat-Su school districts asking about their preferences were not immediately returned.

“I’m a little reluctant to speak for the districts but there’s a good chance we would have (fewer) schools in attendance if we run the same size meet as in the past, because there are a lot of fears about coming to Anchorage at all,” Strickland said.

Some school districts have already decided not to send athletes to the state championships, Strickland said, including Region I, which includes Kotzebue and other schools in the area.

Kodiak, which has a long tradition as a cross-country powerhouse, might not come either. There have been no cases of COVID-19 on the island, cross-country coach Ashley Mortenson said, and the school district is reluctant to send students to places where the virus is present.

Even so, Mortenson is in favor of a full-sized meet even if her team can’t be there.

“Moving the meet to Kincaid is a good start. Expanding participation to the normal amount would be the appropriate next step,” she said.

As Kodiak considers whether it will send runners to Anchorage, “the mass start is a bigger issue than larger numbers,” Mortenson said.

The state meet is traditionally a one-day affair that fills that the start/finish area at Bartlett High with people. Many schools set up colorful tents or canopies to use as a home base, and there’s easily more than a thousand people on hand.

“It’s like a state fair without the rides,” Strickland said. “We’re not willing to have a lot of the public there, and what helps with that is less entries.”

Alaska’s high schools haven’t seen a state championship since February. State meets are set for Oct. 10 in both cross country and tennis, which will also have a reduced field of participants, and Strickland said those meets could set the tone for the rest of the school year.

"If it were to be a situation where it led to the spread of COVID, it becomes inherently harder to run any events, because we’re also having people tells us don’t do anything,” he said.

The Anchorage coaches plan to continue fighting for a meet with more runners, interval starts and limited spectators.

A one-size-fits-all approach doesn’t always work in a place like Alaska, said Caterinichio, who believes a pandemic requires outside-the-box thinking — and that opportunities to participate shouldn’t be taken away from students if alternatives exist.

“The spirit of high school sports is inclusiveness,” she said.