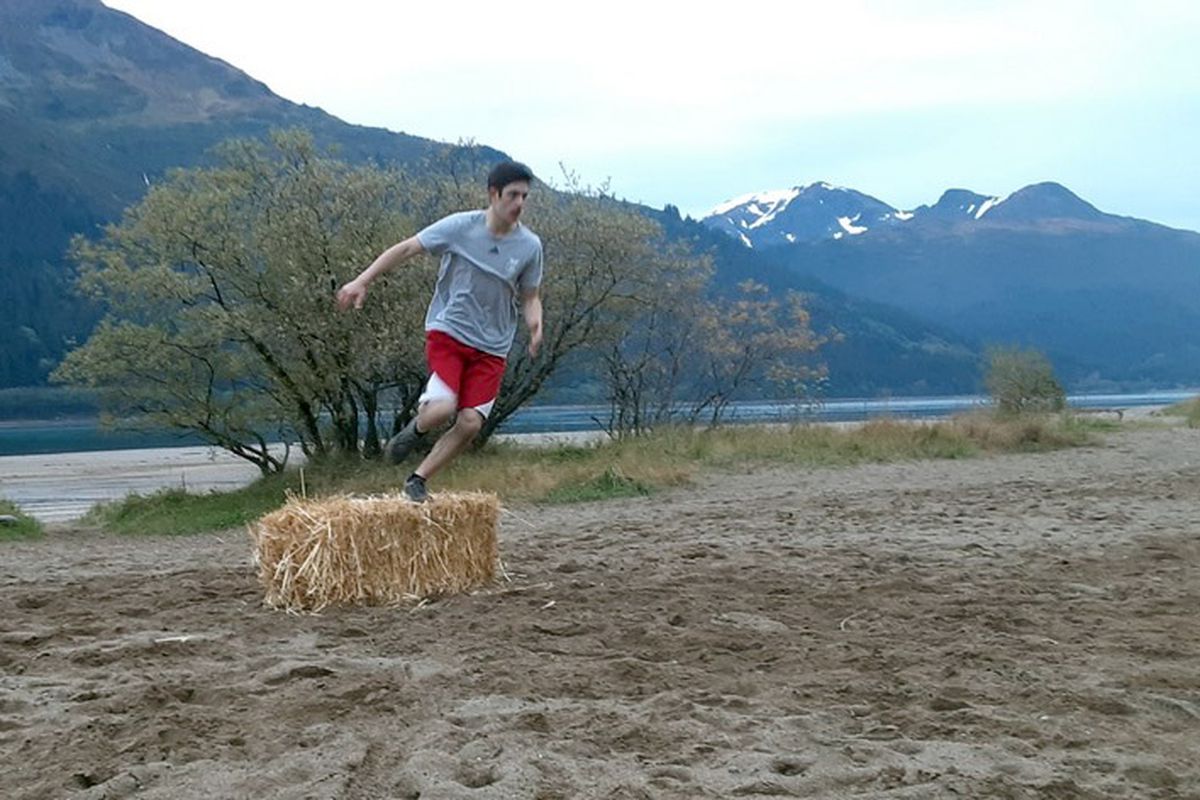 Ben Coutu, a senior on the Juneau-Douglas cross-country team, jumps over a bale of straw during the Sayéik Showdown relay race Tuesday in Juneau. (Photo by Abby Jahn)

Ben Coutu, a senior on the Juneau-Douglas cross-country team, jumps over a bale of straw during the Sayéik Showdown relay race Tuesday in Juneau. (Photo by Abby Jahn)

In Southeast Alaska, cross-country teams hope to outrun COVID-19 with a blend of ingenuity and logistical planning.

Ingenuity was on display earlier this week in Juneau, where high school runners prepared for Saturday’s Region V cross-country championships with an obstacle relay race. They ran bases on a ball field, crawled under picnic tables, climbed flights of stairs, waded through Gastineau Channel and jumped over bales of straw.

They even ran on a cross-country course for a little bit.

Come Saturday, runners from Juneau’s two high schools will race on a real course for the region’s Division I championships. Around the same time, runners from Ketchikan will compete on their home course in a virtual component of the championships, because COVID-19 travel restrictions are preventing the three teams from racing at the same place.

Meanwhile, logistical planning will be required to pull off the region’s Division III championships in Petersburg.

The small island town, located about halfway between Juneau and Ketchikan, will transform into a miniature Grand Central Station for a meet that will begin Friday and end Saturday.

Seven schools are competing, and it’s possible some will come and go without ever seeing runners from any other teams.

Petersburg will host — for maybe two hours at a time — five teams that will fly or boat to the island. A seventh team, Haines, will stay home and compete virtually.

The schedule is head-spinning. Tiny towns in the region want to ward off the coronavirus as best they can, and to do so most of the teams are coming to Petersburg one at a time, running by themselves, then leaving.

“No one wants to bring the disease back to a small town,” Petersburg coach Tommy Thompson said.

Wrangell is coming Friday afternoon by jet boat, racing and then leaving. Then Petersburg will race.

On Saturday morning, teams from Klawock and Craig will arrive together by jet boat, race together, then leave together — the Prince of Wales Island towns are separated by 4 miles and have been in the same bubble this season.

Around noon, Hoonah’s teams will arrive on charter flight, run, and leave. Gustavus runners will also fly in and out.

None of the runners will be in town for more than two hours, Thompson said. No overnight stays, no restaurant meals, no shopping in stores.

The mastermind behind the meet is Petersburg athletic director Jaime Cabral, who set up a course near the south end of the island to make things more convenient for those arriving by jet boat. He also helped coordinate race times for the visiting teams and a transportation system using school buses and 14-passenger vans to transport them to and from the meet.

When it’s all over, times will be combined into final results to determine which runners — 14 boys, 14 girls — will advance to the Oct. 10 state meet in Anchorage.

Left out of the mix will be Haines. The Glacier Bears are the reigning Division III boys and girls team champions, and they aren’t allowed to travel because of COVID-19. Because they won’t be at the actual meet, they can’t qualify runners for the Oct. 10 state championships, Thompson said.

But at least they will run, and they will be able to compare their times to others in the region. And during a season like no other, you take what you can get.

Which brings us back to Juneau.

Tuesday’s Sayéik Showdown relay race was created during the COVID-19 era to keep kids on the Juneau-Douglas and Thunder Mountain teams engaged, entertained and fit during a season that has included no head-to-head competition.

“Normally, the kids really develop a sense of community while traveling, getting to house together at a school, cook meals together, dance together, have our annual team talent show, take long ferry rides — we’ve got a lot of time to spend with each other,” Juneau-Douglas assistant coach Hilary Young said.

But little is normal this school year, so Young and assistant coach Jesse Stringer cooked up an obstacle-course relay race, inspired by the old Bartlett Relays.

If you remember the Bartlett Relays, which featured hay bales and water pits, imagine that race on steroids.

Besides the crawling, climbing, wading, bale-hopping and base-running, the nine legs included a bike leg for runners with injuries, a loop on sand and a loop in the woods that brought an extra challenge. “We heard some of the kids got Devil’s Club on that segment,” Young said.

Come Saturday, runners will take on a regular course for the Division I portion of the Region V championships, but it won’t be a regular meet. Juneau and Thunder Mountain will race in Juneau and Ketchikan, the region’s other Division I team, will stay home and race at Ward Lake.

All three schools will vie for spots in the state tournament, but they won’t vie head-to-head.

It’s been that way the whole season.

“We have not raced this year against anyone,” Juneau co-coach Merry Ellefson said. “Even when we’re on the same course as Thunder Mountain, Thunder Mountain will go earlier and we’ll go after them. Our freshmen have never gone toe-to-toe with anyone.”

Runners will advance to state championship from all three races, although Kodiak runners don’t know if the travel restrictions will be lifted for them to attend the state meet.

In Anchorage, Saturday’s Region IV meet will involve the city’s eight public schools at Kincaid Park. It’s the latest in a series of interval-start races that have allowed Anchorage teams to compete during the pandemic.

Runners are expected to start in waves of about eight runners, with varsity runners set to begin at 3 p.m.