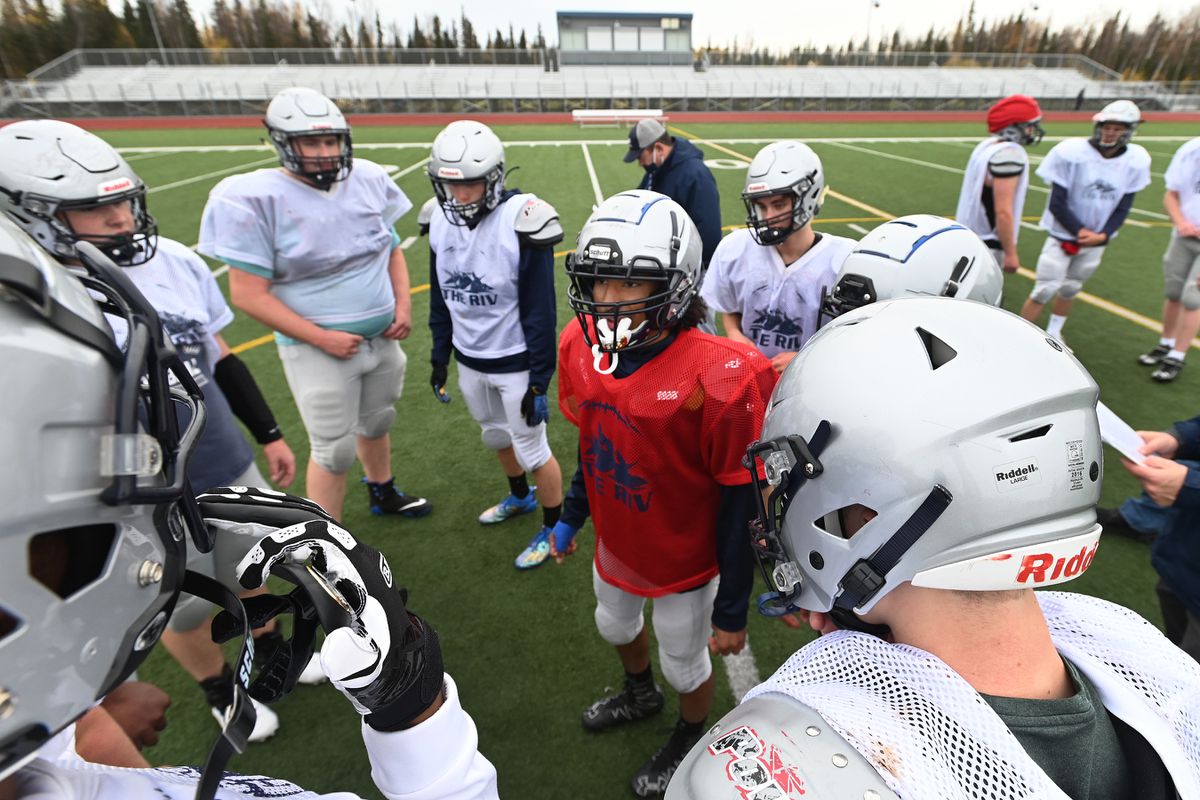 Eagle River players huddle during football practice on Tuesday, Sept. 29, 2020. The team's season ended this week when it was placed on quarantine. (Bill Roth / ADN)

Eagle River players huddle during football practice on Tuesday, Sept. 29, 2020. The team's season ended this week when it was placed on quarantine. (Bill Roth / ADN)

Eagle River High School’s football season is over and a “private social event” held last Saturday has led to a 48-hour shutdown of all of the school’s other sports and activities, the Anchorage School District said Friday.

Multiple students either tested positive for COVID-19 or were identified as close contacts on the heels of a private party on Oct. 3 that drew participant from at least five sports and activities programs, the district said in a letter sent to families with students at Eagle River High School.

The football team was placed on a 14-day quarantine, meaning the Wolves will miss their Division II playoff game next week against reigning state champion Soldotna.

Eagle River was supposed to play undefeated East High in its regular-season finale Saturday afternoon, but the school forfeited the game, saying it wanted to eliminate the team’s exposure to the virus prior to the playoffs.

The two-day shutdown was imposed to allow officials to conduct contact tracing. It means Eagle River athletes won’t be able to compete in either of the state championship events being held Saturday in Anchorage — the cross-country championships at Kincaid Park and the tennis championships at the Alaska Club East.

Among those who lost their chance to vie for a state championship is senior Emily Walsh, who won the girls race at last week’s Cook Inlet Conference championship.

In its letter sent Friday to Eagle River families, the district said the 48-hour shutdown is needed so it can “further investigate the full scope of the potential exposure to staff and students.”

“The District arrived at this decision after learning of a private social event in Eagle River last Saturday evening where student athletes from at least five separate sports and activities programs attended,” the letter said.

Lang, a secondary director with the school district who helps oversee athletics, said that whether it’s a pizza party with a couple of friends or driving around with a carload of friends, students need to think about the possible repercussions of their actions.

“It puts them at risk, and ultimately it puts our sports programs at risk,” Lang said.

Multiple teams and athletes at multiple schools in Anchorage have been quarantined so far this school year, including the Dimond varsity football team and tennis players from four schools. Things got so bad in volleyball that the school district shut down the sport for two weeks, a period that ends Friday.

Fall sports will soon give way to winter sports, and an ominous sign for close-contact indoor sports came Friday when Anchorage health officials said they are investigating a cluster of coronavirus infections linked to an Oct. 2-4 youth hockey tournament that attracted more than 300 people to the Ben Boeke and Dempsey Anderson arenas.

Lang was the Eagle River High School principal until taking an ASD job after the 2017-18 school year, and this year’s seniors were freshmen during his final year at the school.

“It breaks my heart,” he said. “I know some of those kids personally.”

The District arrived at this decision after learning of a private social event in Eagle River last Saturday evening where student athletes from at least five separate sports and activities programs attended. The stand-down is necessary for the District to further investigate the full scope of the potential exposure to staff and students.

Additionally, the District has placed the ERHS varsity football team in a 14-day quarantine due to possible close contact with a member of the program who tested positive for COVID-19. As a result, the team will not play Soldotna in the first round of the playoffs next week and their season will end.

This decision to pause the entire sports and activity program at Eagle River High School is truly unfortunate, and it underscores the responsibility that all students, staff, and families have to help mitigate the spread of the virus whether in or out of school activities. This includes abstaining from activities or behaviors that are contrary to community-wide mandates and that put others at risk.