Going out on top: seniors Zander Maurer and Naomi Bailey run to Division I state titles 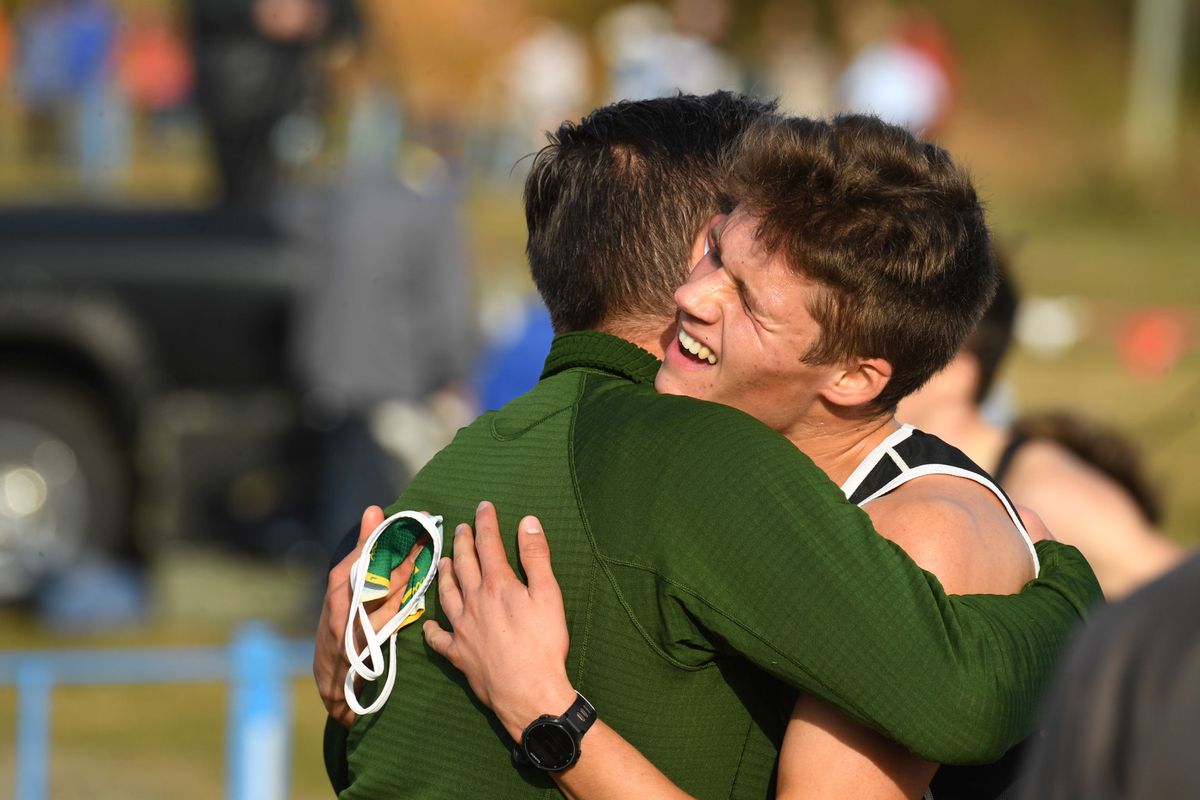 Alexander Maurer, of Service, gets a hug from his dad after winning the Division I boys race at the state cross country championships Saturday at Kincaid Park. (Bob Hallinen)

Alexander Maurer, of Service, gets a hug from his dad after winning the Division I boys race at the state cross country championships Saturday at Kincaid Park. (Bob Hallinen)

As seniors, with all that character-building stuff behind them, they seized the moment.

Maurer, a Service High runner, won the Division I boys state championship to cap a career that every year brought him closer to the pinnacle.

Bailey, a West Valley runner, won the girls title to finish a career that took her from understudy to star.

“I’ve wanted to be a state champion for awhile,” said Maurer, a key member of the Service Cougars for four straight years. “I knew it could happen today, but I wasn’t sure.”

He won in 15 minutes, 24 seconds, to beat rival Michael Earnhart of Chugiak by 27 seconds.

The victory completed a steady progression up the standings at the state championships for Maurer — he placed 15th as a freshman, third as a sophomore and second last year.

He arrived at the top with a personal-best time 12 seconds faster than his previous best, posted last year in Palmer.

“A PR that big is nice, because this year it’s been harder to run faster," Maurer said.

The season was shorter than ever and there were no mass starts, all because of COVID-19, and Maurer’s rivals from years past — Sonny Prosser of Dimond, Hyrum Nelson of Chugiak — graduated last spring.

“(They) kind of helped me push my limits," he said.

For Bailey, it was West Valley coach Dan Callahan who provided the push.

“He saw the drive and the love of running, and he brought me to where I am today,” she said.

All the while, she got faster and faster, breaking the 18-minute barrier for the first time this season.

On Saturday she finished in less than 18 minutes for the third straight race, winning in 17 minutes, 56 seconds. South High’s Ava Earl was second in 18:32.

Earl is a senior who was second in the state as a freshman and fourth the last two years. She knew she would have her hands full with Bailey, so she wrote inspirational messages on the both sides of both hands. On one hand she wrote, “Stay with her.”

Easier written than run, especially after Bailey zipped through the first kilometer in 3:15.

“I went out intentionally hard," Bailey said. "I thought, why not? You’re there, you’re ready to run, you’ve trained.”

After that first kilometer, Earl knew staying with Bailey wasn’t going to happen. "I said, OK, I’m going to run my own race.”

On her other hand, Earl wrote, “Do it for the team.” It was a special message for a meet with no team competition. To keep crowds small, the Alaska School Activities Association kept the races and the crowd small by eliminating the team competition.

Anchorage coaches tried to persuade ASAA to change its mind, and when they couldn’t, they came up with an alternative.

After all of the ASAA-sanctioned races ended Saturday, nearly 100 runners who didn’t qualify for the championships ran the same course in an invitational team race OK’d by the Anchorage School District and sponsored by Skinny Raven.

Results from the invitational were combined with results from the championship races to determine team standings, with “grand champion” titles going to the Grace Christian boys and the Service girls.

The invitational race started about an hour after the Division I races ended, and Earl said she couldn’t wait to support teammates who didn’t qualify for the state meet.

“People who deserved to run at state get to,” she said.

When team results were sorted into separate divisions for Division I and Division II, the Service Cougars swept the titles, with the boys slipping past West by 13 points and the girls winning a close three-way battle by beating Chugiak by two points and South by three points.

The last time Service pulled off a sweep at the state meet was 1996.

“It’s pretty special to be on our team right now,” Maurer said.

After the invitational race was over, timekeepers sorted out the standings while runners gathered in a socially distant manner in front of Kincaid’s giant electronic scoreboard, waiting for the results. They gave a huge cheer when the final team scores appeared.

Runners took note of the efforts made by Caterinichio and others to make a season happen despite a delayed start imposed by the Anchorage School District as a result of the pandemic.

As he was wrapping up a postrace interview, Maurer asked if he could say one more thing.

“I just want to thank all the people who put this season together,” he said, mentioning Caterinichio specifically. “They made it possible for us to race here.”

This story has been updated with corrected team scores for Division I and Grand Champion girls.

Because of a high volume of comments requiring moderation, we are temporarily disabling comments on many of our articles so editors can focus on the coronavirus crisis and other coverage. We invite you to write a letter to the editor or reach out directly if you’d like to communicate with us about a particular article. Thanks.]