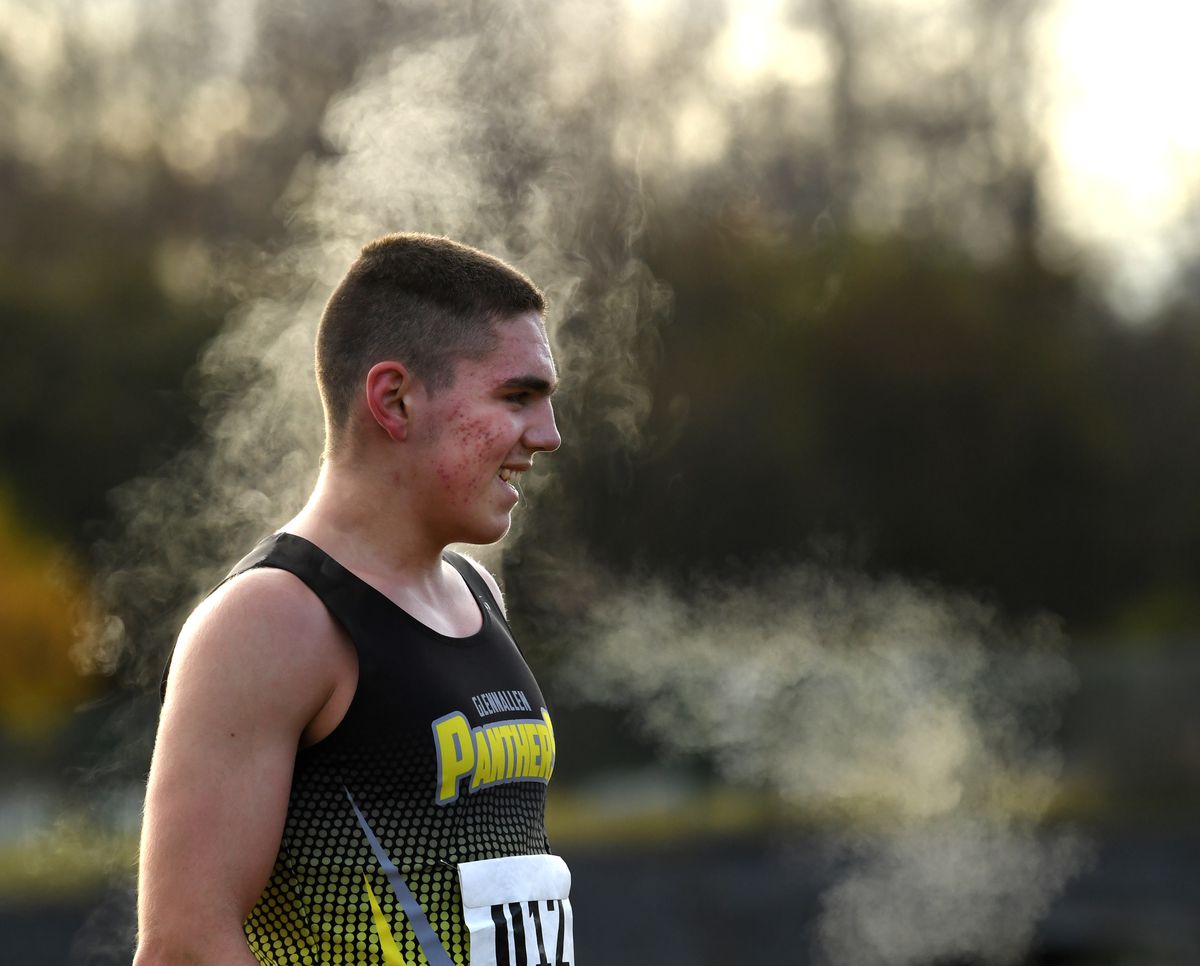 Steam rises off of Kael Gerlach of Glennallen after he won the DIII Alaska state cross-country championships with a time of 17:14 at Kincaid Park on Saturday. (Photo by Bob Hallinen)

Steam rises off of Kael Gerlach of Glennallen after he won the DIII Alaska state cross-country championships with a time of 17:14 at Kincaid Park on Saturday. (Photo by Bob Hallinen)

A wrestler running in new shoes and a boy chasing his accomplished older sister captured championships Saturday at a state cross-country meet unlike any other in Alaska history.

Aileen Lester of Newhaven and Kael Gerlach of Glennallen claimed victories in the Division III races at Kincaid Park, where a scant crowd of runners and spectators gathered for the first high school state championship of the COVID-19 era.

Lester, a sophomore, and Gerlach, a senior, kept their distance from others quite nicely.

Lester won the girls 5-kilometer race by 10 seconds to win a race with just nine runners. Gerlach won the boys 5K by 43 seconds in a race with 14 runners.

[Going out on top: seniors Zander Maurer and Naomi Bailey run to Division I titles]

Fewer runners than ever qualified for this year’s championships — an effort by the Alaska School Activities Association to keep crowds small and safe — and many of Division III’s remote rural schools chose not to attend for fear of bringing the virus back to their villages.

“We’re lucky to have a state meet,” Gerlach said. 'I’m really grateful to have it."

Gerlach built a big gap between himself and everyone else while finishing in a personal-best 17 minutes, 14 seconds — second-place Daniel Wardell of Tanalian clocked 17:57 — but he nonetheless had someone to chase.

Briahna Gerlach, now an NCAA Division I runner at Abilene Christian, won four straight girls championships for Glennallen from 2013-16. Her personal-best time in a 5K — on an indoor track — is 17:16.79.

“I gotta call my sister and tell her I beat her PR,” Gerlach said with a grin.

Gerlach was coming off a time of 17:19 recorded at last week’s regional meet, but he wasn’t feeling his best at the start of the race. Warming up while wearing a mask — part of the day’s mitigation protocol — was weird and uncomfortable, he said. Then he got off to a sluggish start on the Kincaid trails.

“I didn’t start pulling ahead until the first or second kilometer,” he said. “I felt like I was gonna puke. … I pushed through it.”

Lester and Glennallen’s Teagan Rude stayed close for the first mile and Lester took control in the final mile of the 3.1-mile race. A state runner-up last season in wrestling, Lester’s now a state champion in cross country.

Lester’s time was nearly two minutes faster than her time at last year’s state meet. She started this season hoping for a top-10 finish at state — that was earlier, when everyone thought there would be hundreds of runners at the championships — but that goal changed quickly when Lester matched her personal-best in her first race of the season.

“I started training early this year at some wrestling camps,” she said. “I ran 23:00 in my first race and that was my state time last year. My dad was like, ‘You need to change your goals. You’ve gotta go for the state championship.’ ”

Lester has a habit of setting goals she later needs to reassess.

Wrestling is her favorite sport, one she’s been competing in since sixth grade. Her goal as a freshman last season was to finish in the top six and earn a spot on the podium. She did better than that, making it to the finals before placing second at 130 pounds

Lester collapsed after crossing the finish line, exhausted but thrilled. “It was the shoes!” a coach told her, and she while still on the ground she lifted her feet into the air to show off the baby-blue New Balance shoes she bought the day before at Skinny Raven.

“They met us outside and brought out shoes,” Lester said. The third pair was a perfect fit.