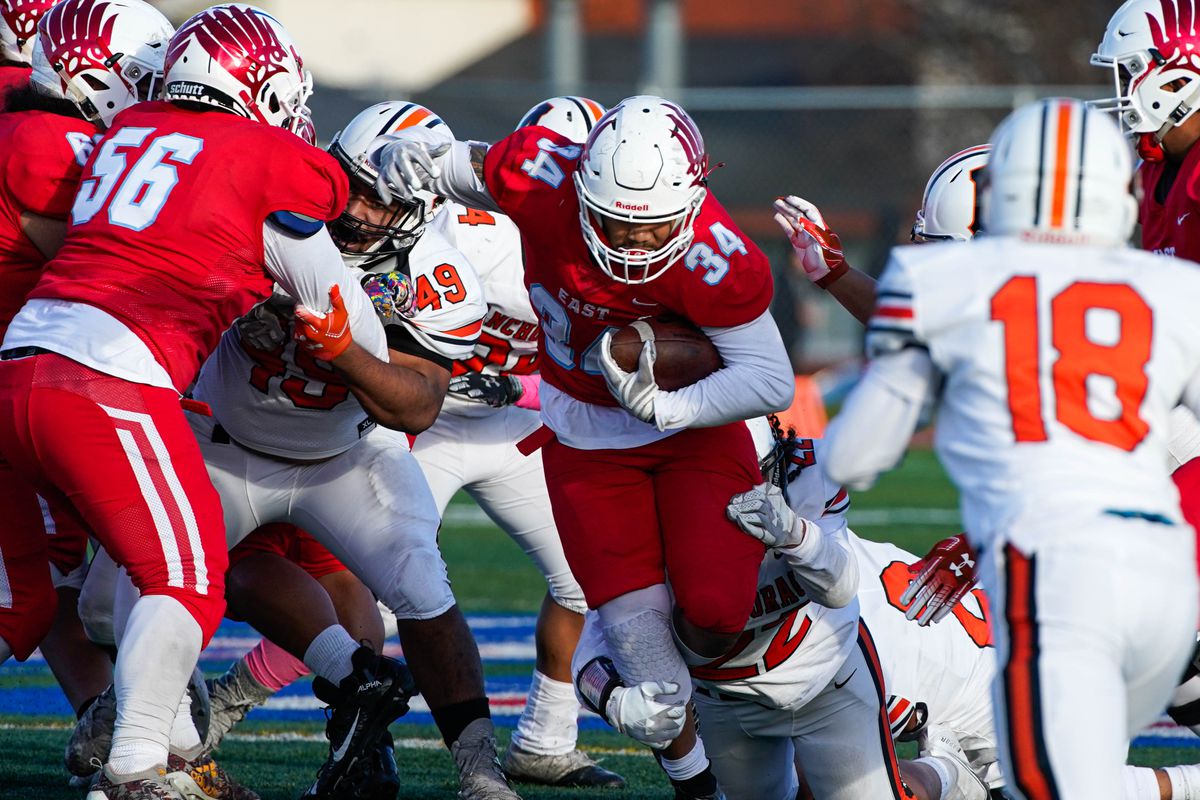 Flocks of geese in familiar formation flew over East High’s football field in a southerly direction during the opening moments of play on a brisk but beautiful Saturday afternoon.

The birds were migrating right on schedule. They did so as the East Thunderbirds continued their season’s winning ways despite delays and detours caused by the ongoing COVID-19 pandemic.

Senior quarterback Ja’sem Atonio passed for 219 yards and three touchdowns and the defense racked up eight sacks as the unbeaten Thunderbirds dominated West 34-0 in the 76th edition of the state’s longest rivalry.

The victory puts East in the championship game of the Anchorage School District playoffs, created when the Alaska School Activities Association canceled fall state championship events because of rising COVID-19 cases in Anchorage and elsewhere.

East will host Bartlett on Saturday at 2 p.m. for the city championship, according to coach Jeff Trotter. The Golden Bears surprised 2019 state champion South 34-24 in Saturday’s other ASD semifinal game.

[Bartlett finds the motivation to take down South in football semifinals]

In their previous meeting this year, East beat Bartlett 14-8 on Sept. 25, and the Golden Bears have won three straight games since then.

Trotter said his team will be happy to line up against Bartlett one more time.

“It is nice to see east-side football on the upswing,” he said.

The city playoffs — a state-tournament light of sorts, since no teams outside Alaska’s largest city are included because ASAA is only allowing intra-regional play right now — were announced earlier in the week. The T-birds had been scheduled to play Chugiak on Saturday before ASAA’s First National Bowl was scrapped and hadn’t played in two weeks because Eagle River forfeited a Oct. 10 game against them.

“What’s been fun is practice,” said East junior Damarion Delaney. "Everybody’s been keeping up the hard work and keeping the same goals in mind.

“We’ve never allowed ourselves to let up on the gas. Whatever has come to us, we’ve just had to handle it.”

Delaney caught three of Atonio’s passes for 46 yards and two touchdowns. The second score, a 16-yard play with 3 minutes, 36 seconds remaining in the third quarter, seemed like it wouldn’t amount to much. Atonio dumped the ball off to Delaney in the right flat, and Delaney somehow maneuvered his way toward the goal line as a mass of players from each squad converged.

“I saw some blockers in front of me,” Delaney said. “I also got a little bit of help. A little bit.”

East senior receiver Jordan Holland caught six balls for 96 yards, and 14 Thunderbirds rushed the ball at least once to help East outgain West in total offense, 358 to 111. Defensively, Dominic Peseti and Auko Manu each recorded two sacks for the T-birds.

Trotter said he’s proud of his players, who like everyone else are facing change and adversity in their daily lives during the pandemic.

“Adapting, it’s all about adapting, because it seems like something new is thrown at you every single day,” Trotter said. "At the beginning of the season, we talked that the teams adapting to this changing environment would be the ones most successful.

“I’d like to think our kids have done a pretty good job of that.”

West finished its season 3-3, a record that includes a forfeit victory over COVID-shuttered Dimond. Coach Tim Davis said it’s unlikely the Eagles and South will play a third-place game next week even though it’s on the ASD schedule.

Not a ton of pluses, but West does have something bright on the horizon.

Eagles quarterback Benni Collins took the brunt of East’s defensive punishment, and when sophomore Harrison Steves-Little spelled him in the fourth quarter, he showed pocket awareness in his first taste of varsity action.

He finished with 49 passing yards and 9 rushing yards, and on the second-to-last play of the game, he endeared himself to teammates by lowering a shoulder and trucking a would-be tackler for a 5-yard gain.

Manu scored a strip-sack on the next and final play, and East’s Metui Seluini scooped up the fumbled ball and took off. As time expired, West senior Gabe Taylor hustled for a tackle about 20 yards downfield.

In postgame remarks to his team, Davis thanked Taylor for winning that play despite what the scoreboard read. The coach summarized uncertainty and challenges of the last several weeks and implored the Eagles to take all they learned into every day going forward.

“We now know what it really means to come together as a team,” said West junior Jaideven Suesue, who recovered a second-half East fumble. "With COVID and everything, we stuck together.

“It’s always fun to play football. For many of us, it’s everything. It’s life.”