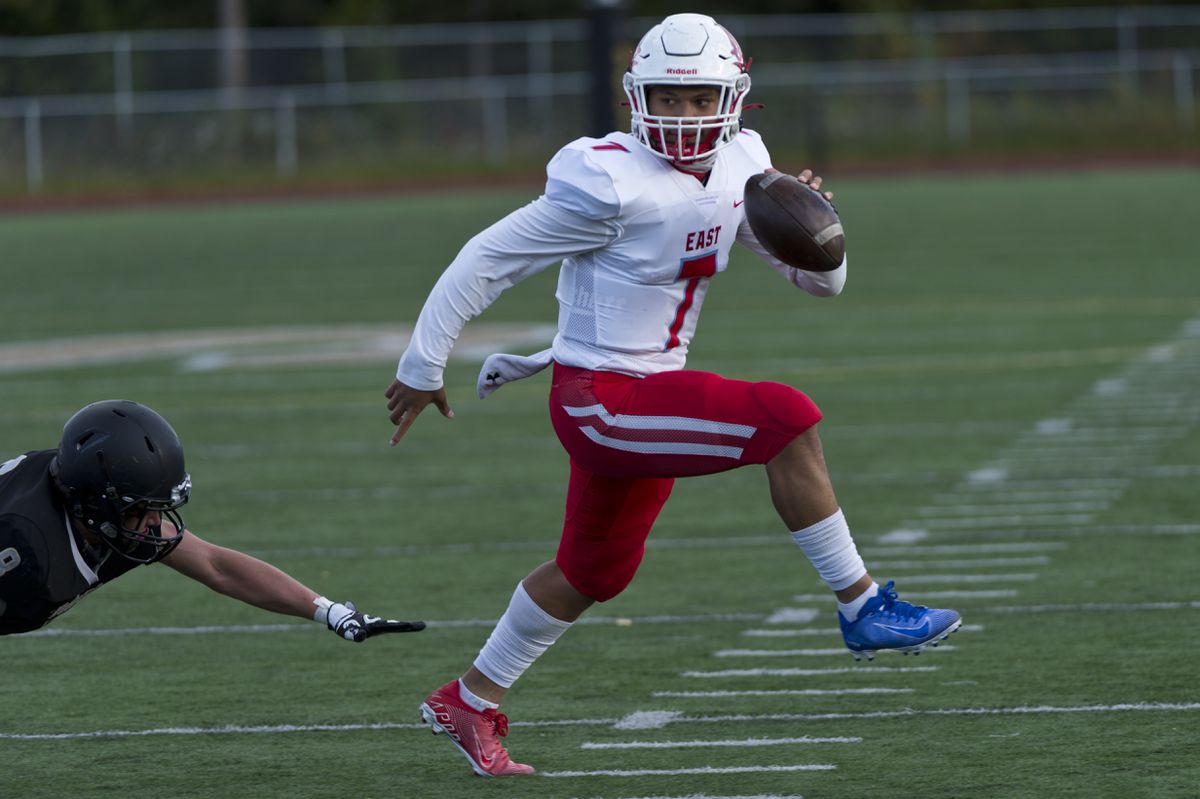 How it’s going: From last month, a photo of Lewis-Tufi and Atonio in opposing high school uniforms sharing a friendly handshake. Lewis-Tufi plays safety for Bartlett, and Atonio is East’s starting quarterback.

I don’t how many ppl know, but this is legendary and historical for Northeast Anchorage. So much love between these two teams. Our neighborhood NEEDS IT. I’m just happy to be a fan and witness it all. How it started and how it’s going. @JasemAtonio @LewisTufi_E pic.twitter.com/IpIkVHhH8M

“What a great way to reflect back on when we were all on one team, what we went through together,” Atonio said of Boutte’s Tweet. “Now we’re older and we’ve went our separate ways. But it brings us back to a real brotherhood, one we always know is there.”

Saturday’s championship game is the culmination of a season shortened to eight weeks by the pandemic. Bartlett is 4-2 and East is 6-0, with five wins coming on the playing field and a sixth coming from an Eagle River forfeit.

On Friday night, Chugiak (0-5) travels to Service (1-3) to decide fifth place in Anchorage. Kickoff is scheduled for 6 in what will be the first game for either team in two weeks.

South and West declined to play the third-place game.

“From Muldoon to Mountain View, everyone should just be proud,” Lewis-Tufi said. "Both teams have been playing at a high level.

“It’s time to see which is the best east-side team.”

Since 2002, the Golden Bears and Thunderbirds have played regular-season games for the “East Side Boot.” Those games feature a traveling trophy that has a cleat once worn by Aanooalii “Auno” Filoialii, an all-state defensive lineman for East who was 18 years old when he was killed in a car accident.

“I’m not saying we took (Bartlett) lightly, but ‘The Boot’ game is always so significant for everyone involved,” Atonio said. “Maybe we let ourselves be too emotional, but not so much come Saturday.”

The pride and sense of friendship between players on both squads subsides once the game starts.

“The brotherly love is there,” Lewis-Tufi said. “But on the field, it’s a war zone.”

“We’re totally different off the field, we really take care of each other,” he said. “During the game, it’s business.”

As has been the case all season, COVID protocol means the ASD finale will be played with few fans in the stands. Each player is allowed to invite two spectators who are screened before entering the venue.

But keep a close eye on East High’s perimeter. It will be interesting to see how many vehicles line up along East 20th Avenue and at nearby Russian Jack Elementary to sneak a peek.

“Since this is a big rivalry game, I expect to see lots of people outside the gates, standing on cars, barbecuing, tailgating,” Atonio said.

When the Alaska School Activities Association canceled most fall state championship events amid surging COVID cases, the Anchorage School District came up with a city tournament so kids could get a post-season.

The Golden Bears and Thunderbirds may call it a “state championship" because, well, why not?

“We’re treating this no differently,” said East coach Jeff Trotter, who saw his team fall to Colony in the 2019 quarterfinals. "It’s just one of those things. These kids have worked an entire year after not finishing last season the way they wanted.

“We’re not taking that effort or anything else away from them.”

“It’s not going to happen,” Trotter said. “But win or lose (against Bartlett), we’d be willing to meet anyone if we need to do so.”