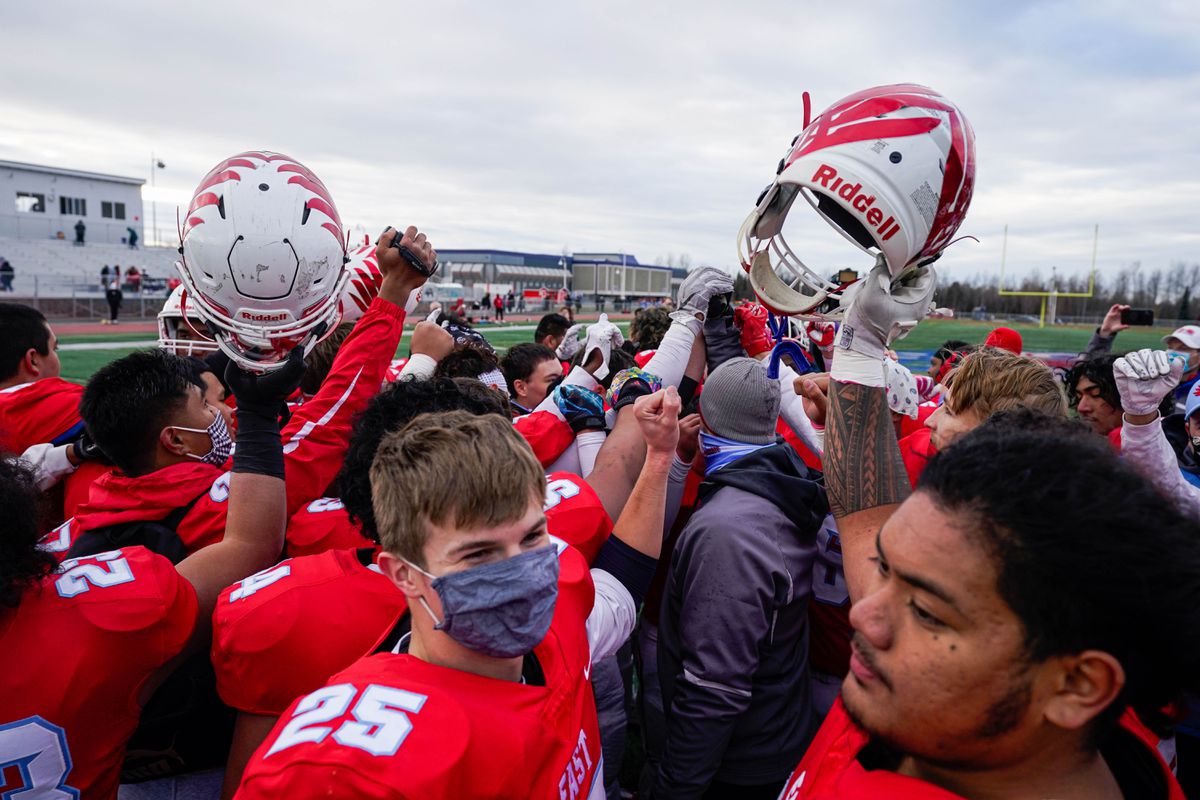 The 250-pounder ran around the left end and gained 18 yards. Then he saw the flag.

“Oh, man,” Peseti said to himself.

But he wasn’t mad about the holding call that negated his run and cost his team some yardage. “I was just happy to get in on offense,” he said.

There were plenty of happy Thunderbirds after a near-perfect performance in Saturday’s Anchorage School District football championship game.

East earned the championship by throttling Bartlett, 41-0, to finish an unbeaten, pandemic-altered season. There were fewer games than usual and no state playoffs, but East made the most of its chances.

“What I want people to remember is that this game was a blowout,” said Peseti. “We did all we could to make sure of it.”

Peseti, fellow D-linemen Auko Manu, Stanford Sheck and Georgie Mageo, and numerous other East defenders pitched their second postseason shutout in a little more than a week. After downing West 34-0 in the semifinals, the Thunderbirds stifled Bartlett in the title tilt, surrendering 98 total offensive yards to finish the season with a 7-0 record.

The Golden Bears came into the game averaging 310 yards.

Wondering about the East offense? It showed up in fine form as well.

Senior quarterback Ja’Sem Atonio and senior receiver Jordan Holland put on a spectacular first-half show to put the swiftly played game out of reach early. Holland caught all five of his receptions for 99 yards and two touchdowns in the first two quarters.

After Holland intercepted Bartlett’s Reason Timberlake to get the ball for East, he dazzled on a 69-yard scoring play down the right sideline. He ran 30 yards after the catch and made a pair of killer cuts to beat Golden Bears senior Elijah Lewis-Tufi to the goal line.

With 39 seconds remaining in the half, Holland dove to the ground to corral Atonio’s 3-yard scoring pass to boost East to a 28-0 halftime lead.

East junior Elijah Reed liked everything he saw from the offense. As the team’s H-back, he’s almost exclusively a blocker.

“I got to give a big shoutout to our O-line,” Reed said. “Blocking is the main part of football and people don’t talk about it much.”

Atonio completed 13 of 17 pass attempts for 234 yards and four touchdowns.

The lefty earned rave reviews from Chugiak’s Tom Huffer Sr., one of the coaching deans of Alaska football who roamed the sideline. He lauded Atonio’s play, saying his release and footwork are some of the best he’s witnessed.

Reed was all too happy to help his friend.

“The time we give Ja’Sem, it gives him all the great opportunities and it just adds up one after the other,” he said. "From the first to last play, it’s a great feeling to be part of it.

“East’s some dogs, man. Some dogs. I wanted to win for the seniors and every last one of us.”

Reed got in on the fun with a 15-yard reception in the fourth. It marked only the second time he touched the ball in six games. (East’s seventh win was a forfeit by Eagle River.)

East junior Deuce Zimmerman hauled in three catches for 81 yards and two touchdowns, including an amazing yards-after-catch display for a 30-yard score. Junior receiver Damarion Delaney finished with 43 rushing and 27 receiving yards, and senior running back L’Jun Dias totaled 52 yards and one touchdown.

“We came in with full energy to start,” said Bartlett senior Lotomama Manogiamanu. “But once the game started, we were flat. We didn’t expect the game to go like this.”

The Golden Bears kept East in check when the teams played Sept. 28 and the Thunderbirds eked out a 14-8 win.

“Once East clicks, (it) is on the go,” Manogiamanu said. "Props to them, those are some nice kids.

“But wherever I go in the future, I just hope this (Bartlett) program remains solid. I think we built a good foundation and the team will keep coming.”

Sophomore Niko Alailefaleula led the Golden Bears with 36 yards on 15 carries. Niko is the son of Tui Alailefaleula, a 2001 Bartlett grad and former all-everything monster of a defensive player who played at the University of Washington.

East finished with 382 total yards, right about average in a season where it scored an average 36 points per game and surrendered less than 6 per game.

“Remember this team,” Reed said. "We came a long way from COVID. Everything was different. ... It’s crazy.”