A 45-point game puts Bartlett’s Bishop Tosi in the spotlight, but don’t overlook his academic stats 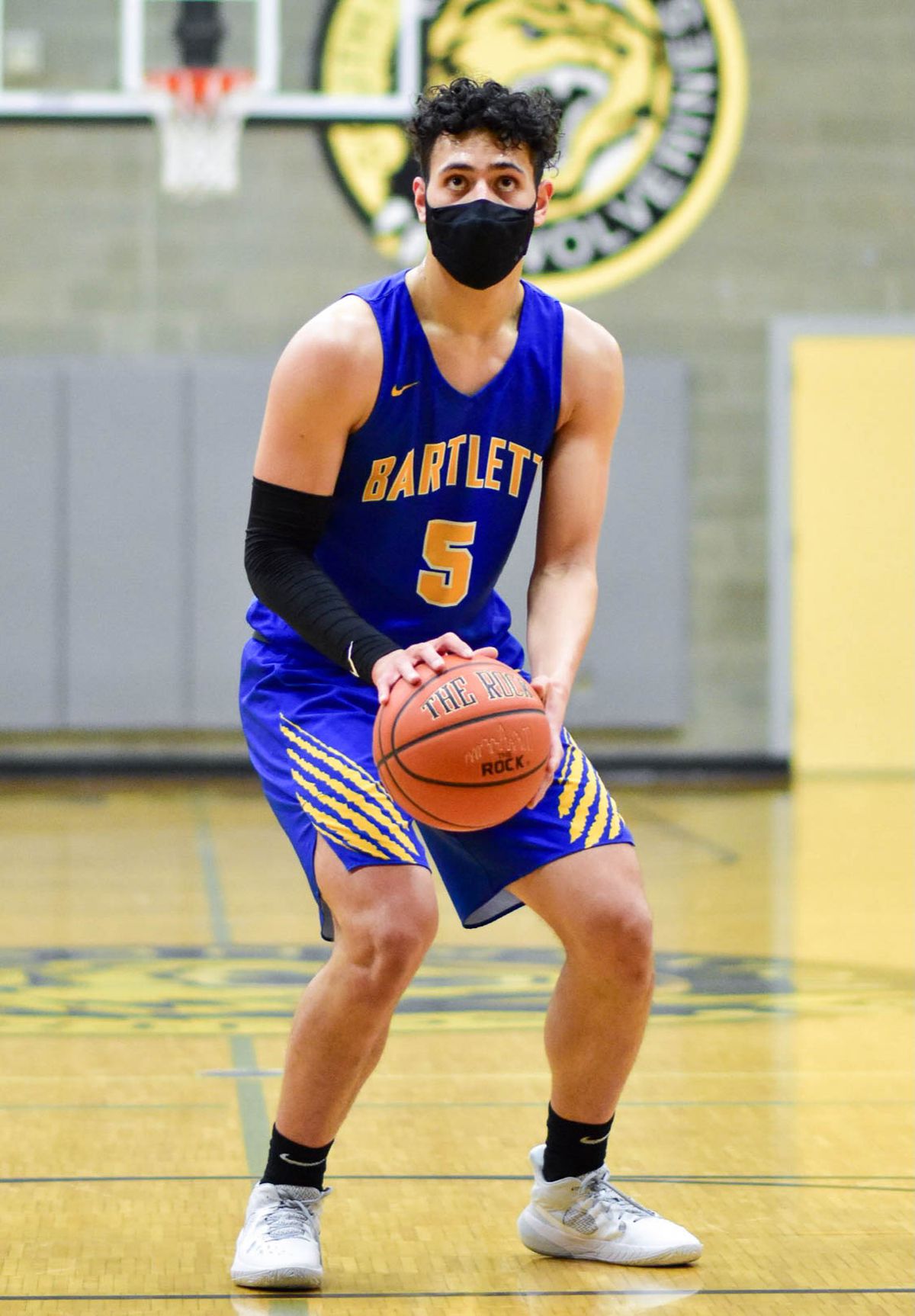 Bartlett High’s Bishop Tosi racked up one of the highest-scoring games in Anchorage basketball history Friday night, and when his proud coach tweeted about it the next morning, Tosi was quick to DM the coach with a correction.

Steve Drussell got the points right: Tosi poured in 45 points in a 64-61 loss to Dimond High.

But he got Tosi’s GPA wrong.

In a post intended to catch the attention of college coaches, Drussell made a point of sharing Tosi’s 3.95 grade-point average. Not long afterward, he posted a correction: The GPA is actually 4.02.

“Bishop definitely corrected me on that,” Drussell said. “He takes academics extremely seriously. He always has. He’s a hard worker on and off the court, and he’s made a lot of sacrifices to keep those grades up.”

Tosi is a 6-foot-5 power forward who has attracted attention from several colleges so far, including four that contacted Drussell after news spread of Tosi’s 45-point night. He’s still weighing his options.

The 45 points are the most scored by an Anchorage boy since West High’s Da’Zhon Wyche pumped in 49 in a December 2016 game in the Alaska Airlines Classic. That is believed to be the third-highest scoring performance by an Anchorage boy — Eli Yaw of Eagle River Christian scored 52 points in 2006, and Steve Page of West set the unofficial city record of 55 points in 1972.

“Oh, man, it was just phenomenal to watch,” Drussell said. “He was focused all night. He was just in the zone.”

Tosi said he wasn’t aware he was piling up the points until after the game, which isn’t so much of a surprise when you consider Bartlett and Dimond engaged in a heated, back-and-forth battle decided in the waning seconds.

“I know in the first quarter I scored six points in a row and thought, ‘Oh, I’m doing pretty good,’ and then I forgot about it after that,” Tosi said. “After the game someone told me, ‘You had 45.’

Maybe the best part of the night came when Tosi went home.

Tosi is the son of Mao and Cari Tosi, and if the name Mao Tosi is familiar, it’s because the East High graduate played in the NFL for the Arizona Cardinals after a stellar dual-sport career at the University of Idaho, where he was all-conference in football and basketball.

Spectators aren’t allowed at Cook Inlet Conference games because of COVID-19, so Mao watched his son’s game on his computer and kept track of stats.

Bartlett trailed 62-61 with 28.5 seconds left when it got possession of the ball on an over-and-back violation by the Lynx. Drussell called a timeout and used it to set up a final play offense.

The Golden Bears never got a chance to run it.

“We’re coming out of the timeout and the referee came to us and said, ‘Oh, we reversed the call; inadvertent whistle; Dimond ball,’ ’' Drussell said. “It was a controversial call. We had to end up fouling and they made the free throws.”

Tosi became a starter for Bartlett midway through his freshman season and is averaging about 20 points per game this season. In his final semester of high school, he’s taking AP English, AP calculus and U.S. Government.

Tosi said his parents make sure he stays on top of his schoolwork, but he is also self-motivated.

“I just think you should have good grades,” he said. “I always have to get my schoolwork done before I get to do anything fun, but I feel bad if I don’t get good grades. I heard my dad didn’t have the best grades in high school and I thought, ‘I don’t want that to happen to me.’

“I could easily get Cs and slide through, but I choose to do better.”

East 64, Chugiak 52 — East put Chugiak in an early hole and held on to remain unbeaten. Elijah Reed scored 10 of his 13 points in the first quarter to spot the T-birds to a 20-10 advantage, and Hasaan Herrington (24 points) and Jahbez Sellers (17) helped protect the lead. The Mustangs had a trio of double-figure scorers — Jackson Wall (17), Morgan Grant (16) and Owen Lewis (11).

Bartlett 64, Dimond 46 — Amelia ‘Uhila dropped in 20 points and Adam Kaganak had 14 as Bartlett remained undefeated. The game was close at the half, but a 25-7 third quarter allowed the Golden Bears to stretch a four-point lead into a 55-33 lead. Kayla Pili topped Dimond with 15 points, and Bartlett’s Kendel Hodgdon and Alapese Matoutie combined for 19 points.

In other games, East defeated Chugiak 47-40 and South topped Eagle River 57-30. No details were reported on either game.