After 43 years and one tense overtime period, the Bartlett Golden Bears rule girls basketball once again 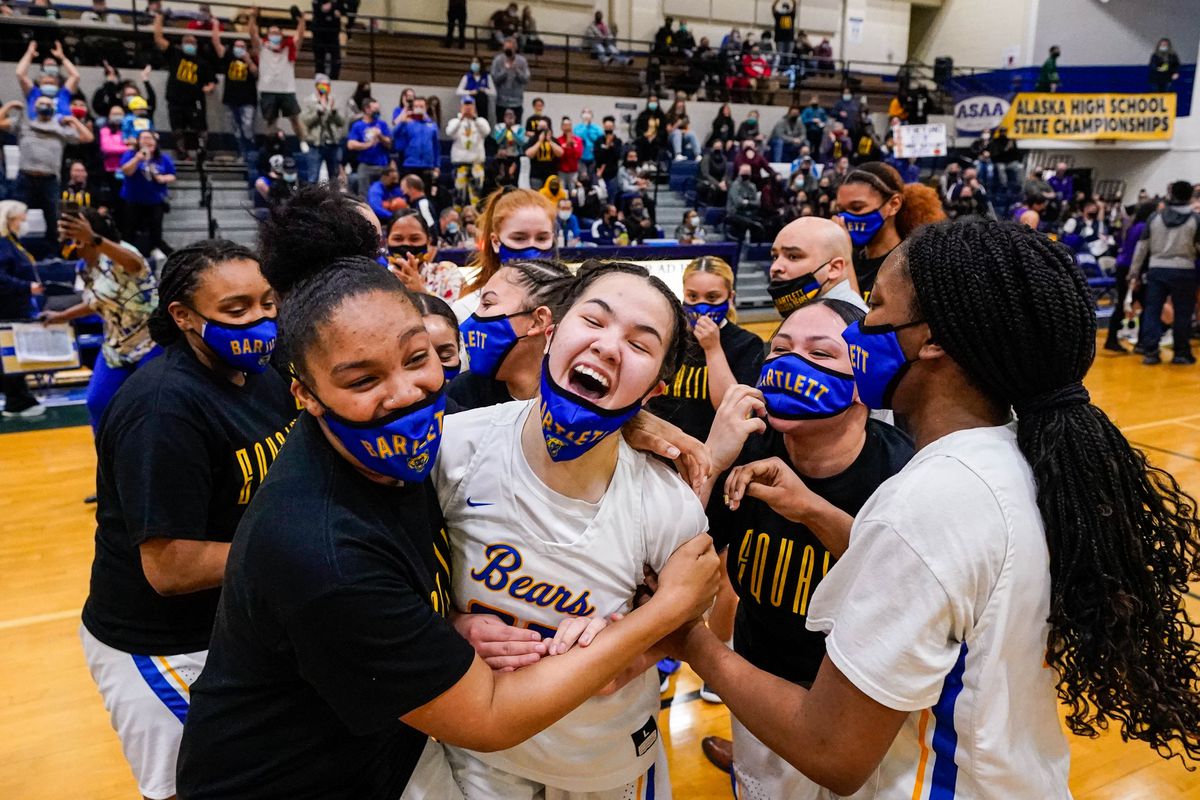 PALMER -- Clarence Smith aimed to bring some New Orleans mentality to Bartlett High six year ago when he accepted a girls basketball coaching job that many viewed as a reclamation project. And like the city Smith hails from, which rebounded from the devastation of Hurricane Katrina, the Golden Bears rebuilt themselves into a championship team.

Bartlett captured its first state championship since 1978 by beating the Lathrop Malemutes 47-46 in overtime Saturday night at Palmer High. The victory in the Class 4A title game completed a perfect season and ended a 43-year wait between titles.

“I told the girls that if you keep believing in yourselves, I promise you at the end of the day, we’ll be state champs,” Smith said.

He was good on his promise. The Golden Bears survived a strong challenge from Lathrop to win the title and finish with a 17-0 record.

“Bartlett hasn’t been known for winning state championships,” senior star Amelia ‘Uhila said. “Coming out with a great group of girls, Coach Clarence believing in us, we came out and worked hard and this is what we came for.”

While low-scoring games are rarely as entertaining as shootouts, this game was an exception. Spectators who packed into Palmer High School’s gymnasium without much regard for social distancing were treated to an instant hardwood classic.

Lathrop drew first blood but a flurry of fast-break layups courtesy of ‘Uhila gave the Golden Bears a slim lead they kept for most of the game.

Bartlett entered the fourth quarter with a 34-29 lead -- a decisive edge in this game -- but with less than two minutes left Lathrop tied it 34-34 on a 3-pointer from sophomore TT Tagovailoa. The teams went back and forth after that and were deadlocked 39-39 at the end of regulation.

Clutch buckets from ‘Uhila and fellow standout senior Adam Kaganak gave Bartlett the lead in overtime. ‘Uhila -- the Class 4A Player of the Year who is headed to Division I Portland State -- had the ball in her hands for most of the final minute.

“There were many schools that wanted her to transfer to their school,” Smith said. “She stayed faithful and I love her for that and now the fruits of her labor are a state championship.”

‘Uhila was dynamic and active on both ends of the court. In addition to scoring 13 points, she helped get the ball into the hands of her teammates with eight assists, five rebounds and four steals.

“I know my teammates can score a bucket when we need it, so making them feel a part of the team is definitely a big thing,” she said.

Kaganak led the Golden Bears in scoring with 17 points and added seven rebounds and a pair of assists.

“It feels amazing after going undefeated all year,” she said. “Our team bonding really brought us together and seeing them happy made me happy.”

Two seasons ago the Golden Bears had a chance to end their championship drought when they advanced to the state championship game against the Dimond Lynx. They came up short, 62-57, and they didn’t get a chance to pursue postseason success last season because of the pandemic.

They came into this season on a mission, and Smith gave them the mindset to complete it.

“.We try to bring a different brand of basketball,” he said. “We want to teach these girls different ways of thinking about basketball.”