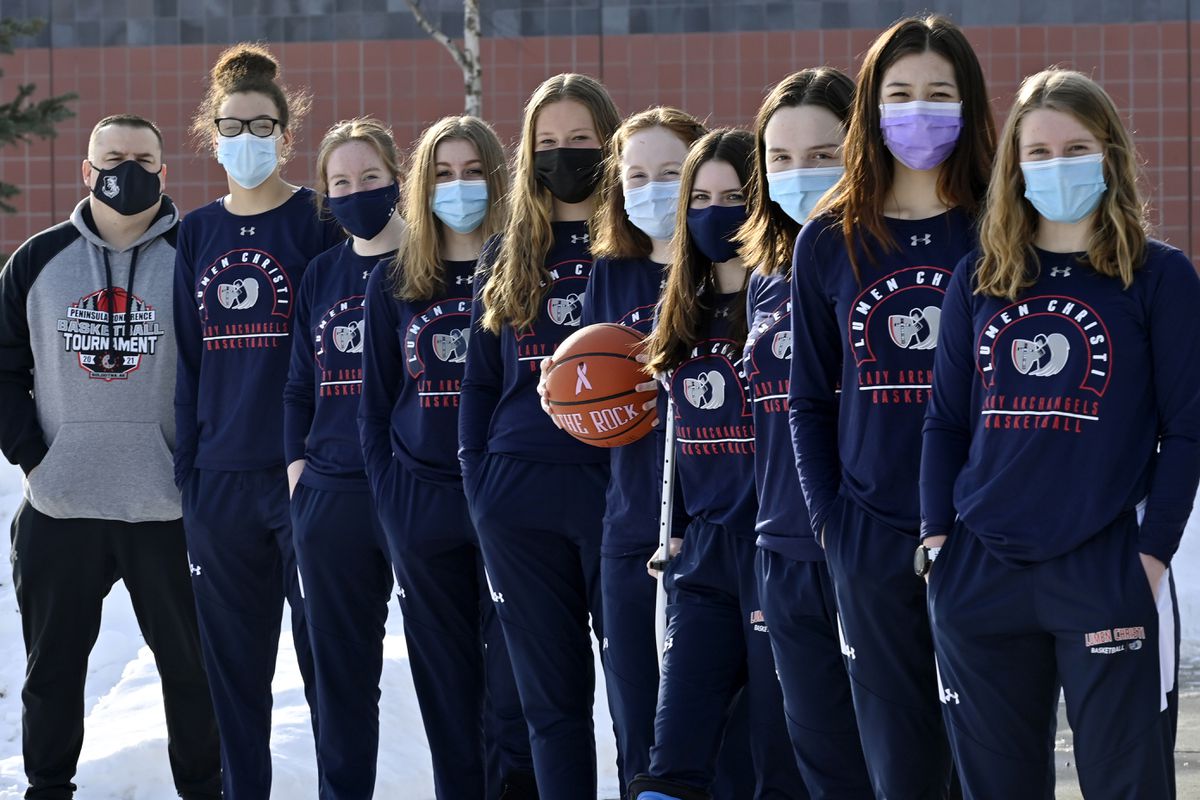 The Lumen Christi girls basketball team will play in the 1A state tournament. The team is photographed outside the school on Jewel Lake Road in Anchorage on March 22, 2021. (Marc Lester / ADN)

The Lumen Christi girls basketball team will play in the 1A state tournament. The team is photographed outside the school on Jewel Lake Road in Anchorage on March 22, 2021. (Marc Lester / ADN)

Lumen Christi High School was 22 years old when its girls basketball team qualified for the state tournament for the first time in 2018. Three years later, the Archangels are back, and a look at their roster tells you they may become regulars at the Class 1A championships.

Four eighth graders, including the starting point guard, are part of a young team for the small parochial school on Jewel Lake Road. Four sophomores and two juniors — one who is injured — complete the lineup.

In the boys championship game, Lumen Christi grabbed a dramatic 72-71 win over Ninilchik to give the Archangels their first sweep of the conference titles.

In Thursday’s first-round games at the state tournament, the girls will play the Newhalen Malamutes at 3 p.m. at Palmer Middle School and the boys will face the Upriver Hunters in a 6:30 p.m. game at Colony High School.

It’s the first time Lumen Christi has sent both teams to the state tournament in the same year.

The boys team, led by first-team all-state picks Brenden Gregory and Daniel Bennett and second-team pick Tim Bennett, has qualified for the last three state tournaments, although last year’s event was canceled because of COVID-19.

COVID-19′s continuing impact canceled the 2021 season for a number of Alaska’s smaller schools, and for the Archangels, that means fewer opponents to play schools of similar size.

“We had to play a lot of 2A, 3A teams — Su Valley, Redington; we played the Grace Christian varsity twice and the JV team once, and the (Anchorage Christian) JV team totally destroyed us,” coach Tom Gregory said.

“The point of me telling you this is obviously we’re a very inexperienced team, we just got killed by ACS by 40, but the reality is we should be getting killed by 40 because we’re playing a team with a second bench and experienced players.”

The Archangels didn’t just get schooled by teams from bigger schools. They got schooled by their coach, who broke down video of every game and shared what he saw with his players.

“I pulled them into a classroom for about an hour a week and point out key things,” Gregory said. “I’d show them video and say, ‘This is what happened. What do you think you should have done?’

“Most of the time it’s coaches chirping in their ear, but when you put it on video, there’s nothing they can say.”

Gregory is an assistant coach for the boys team, whose head coach Adam Trombley — an East High graduate who played for legendary coach Chuck White — is in his fourth season at the helm. The program’s best finish at the state tournament came in 2013, when the Archangels finished third.

Lumen Christi is one of three Class 1A schools that qualified both teams for this week’s tournament, along with Klawock and Buckland.

Point Hope enters as the reigning champion for both boys and girls in 2A — the Harpooners swept the state titles in 2019. King Cove swept the 1A title in 2019 but isn’t back this year.

First-round games will happen at four schools in the Valley on Thursday. Championship games will be played Saturday at Palmer High School, with the first set to tip off at 1 p.m.