With players from two villages and a coach so young he can’t drive the team van, the Upriver Hunters are ready to make their state tournament debut 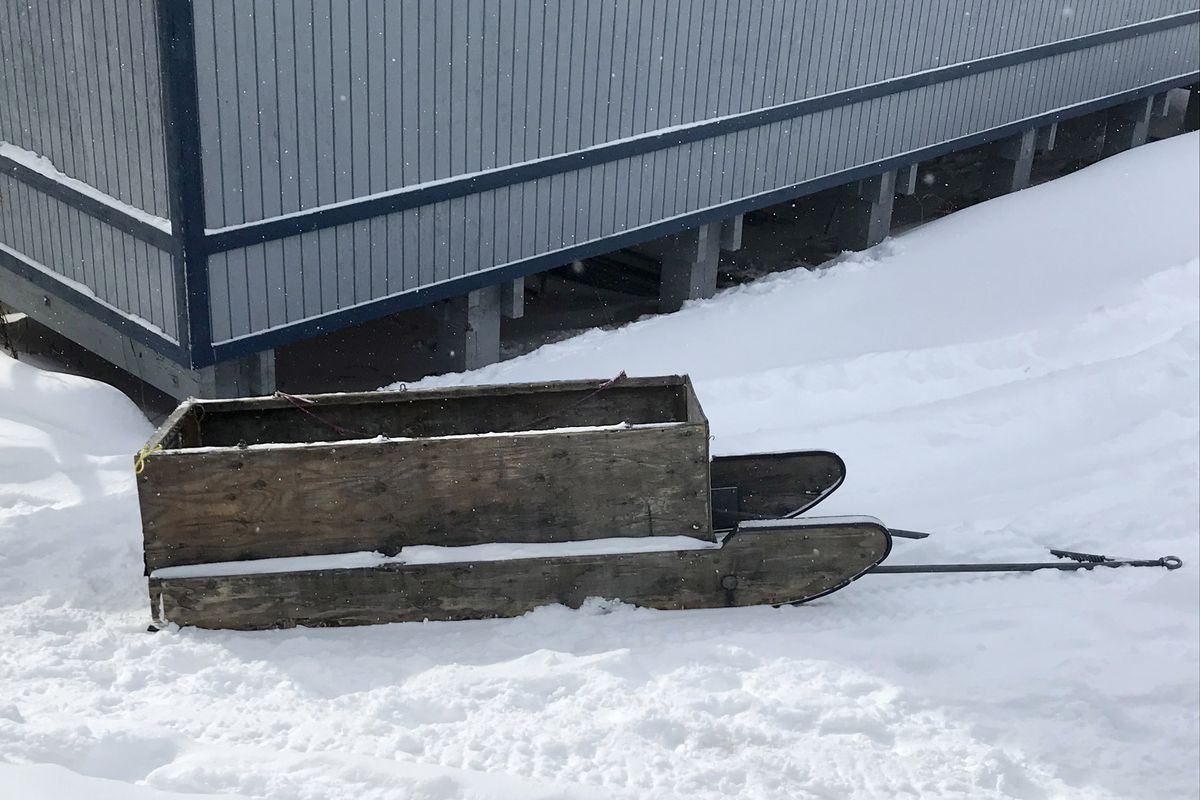 A box sked, 3x8 feet with plywood wall, carries 3 high school players behind a snow machine when Kobuk goes to Shungnak 8-9 miles down river for basketball practices and games. (Photo by Rob O'Neal)

A box sked, 3x8 feet with plywood wall, carries 3 high school players behind a snow machine when Kobuk goes to Shungnak 8-9 miles down river for basketball practices and games. (Photo by Rob O'Neal)

The Upriver Hunters spent most of Wednesday waiting for a break in the weather so they could begin their journey to the Class 1A state basketball tournament in the Valley. The team is a co-op of players from two Kobuk River villages located above the Arctic Circle, and a storm brought wind, snow and low visibility earlier in the week.

Dealing with severe weather is old news in the region. But qualifying for the state tournament is huge, historic news.

The Hunters — a mix of players from Shungnak and Kobuk — will make their tournament debut Thursday night at Colony High School, and for that they can thank something old and something new.

The something old is a box sled called Old Faithful. It measures 3 feet by 8 feet and hitches to the back of a snowmachine when it’s time for Kobuk players to travel 8 miles upriver to Shungnak, where the rest of the team lives and goes to school. Old Faithful is aging but reliable, and it’s big enough to haul three high school-sized players, principal Rob O’Neal said.

The something new is first-year coach Brennon Sun, a former multi-sport athlete at Shungnak School.

Sun is all of 20 years old, which means when the team reaches Anchorage on Thursday, someone else will have to rent a vehicle so the Hunters have a way to get around Anchorage and the Valley.

Sun isn’t old enough to rent a car. He’s not even old enough to qualify as a team chaperone — the Northwest Arctic Borough School District requires chaperones to be at least 21.

“That’s why we hired an assistant who is in his 30s,” Shungnak principal Roger Franklin said.

The Upriver Hunters have been around since 2009, when schools in three upper Kobuk River villages — Shungnak, Kobuk and Ambler — received permission to form a co-op because none of the schools had enough boys to field their own teams.

The kids get along fine, Franklin said. “Everybody’s cousins,” he said.

Some are brothers. Sun, who competed in basketball, wrestling and cross country when he was at Shungnak School, coaches a team that includes two of his brothers — Bryant, a junior, and Brent, an eighth grader.

“Yeah, they listen to me,” he said. “They’re respectful.”

Four of the players are from Shungnak and three are from Kobuk. Sun said players ran a lot before the season to get conditioned, but actual practices are pretty much limited to days when the Hunters have games — practice first, then play.

COVID-19 limited the Hunters to six games this season, Franklin said, and they won them all.

“This is so important for the community, not just the boys,” he said. “You can look back to last March without basketball because of COVID. It was a daunting task not to have it, because that is how we get to see the other villages and have family time.”

Villagers raised $5,000 to help cover the team’s expenses for the trip to the state tournament, according to the Arctic Sounder, and people are thrilled that the Hunters are part of the eight-team tournament.

Kobuk and Shungnak are Inupiaq villages located at the foot of the Brooks Range, and the team is named the Hunters because the area is known for fishing, hunting and trapping. “Whatever’s in season — fishing, moose, caribou, bears,” Sun said.

“It’s really important,” Sun said. “They wait every year for basketball to start.”

And now, for the first time, the season will end with games at the state tournament. The weather broke Wednesday evening, allowing the Hunters to fly to Kotzebue, and they will fly to Anchorage on Thursday.

Once they’re on the ground, O’Neal and Franklin will do the driving and chaperoning, Sun will do the X’s-and-O’s, and the Upriver Hunters will do their region proud.