Lumen Christi dominates to force a running clock and leave no doubt who’s No. 1 in Class 1A boys basketball 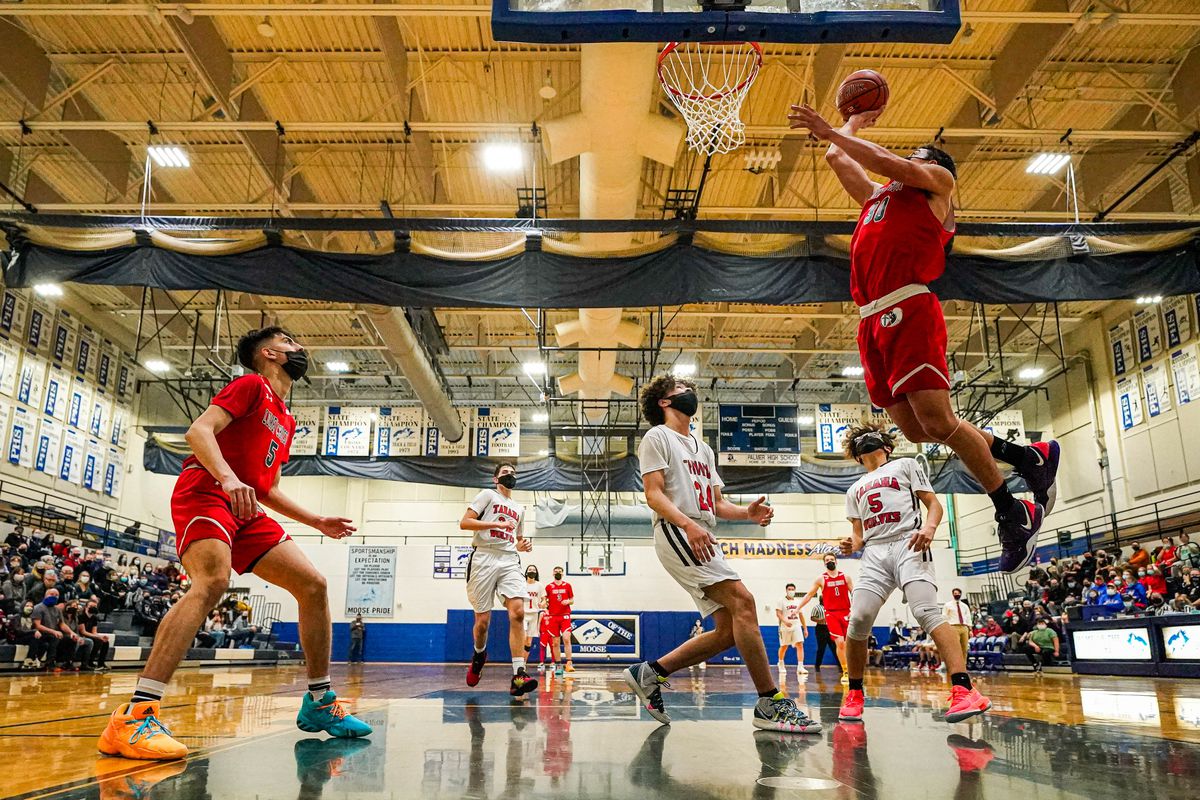 PALMER — This time, the game clock ran precisely the way Lumen Christi and all in attendance preferred. No head-scratching. No controversy.

The fourth-quarter minutes and seconds moved nonstop Saturday thanks to the Archangels’ excellence and the mercy rule. Nothing to worry about.

No doubt. It’s also no question who reigns supreme in Class 1A boys basketball.

Junior Robert Wilcox scored a game-high 34 points — 17 in each half — and the Archangels easily captured their second state crown and their first at the Class 1A level with a 77-30 victory over Tanana at Palmer High School.

The Archangels forced a running clock by building a 40-point lead early in the fourth quarter.

Their near-perfect performance came two weeks and one day after they were awarded the Peninsula Conference championship in spectacularly strange fashion.

“Honestly, what anybody said or thought about us (being at state) didn’t matter,” said Lumen junior guard Brenden Gregory. “That moment can’t be taken away from us.

“This one is even better.”

The circumstances of Gregory’s March 19 3-point buzzer beater defied logic but resulted in Lumen scoring a 72-71 overtime win over Ninilchik in the Peninsula Conference finale. What followed in the moments and days after the shot confounded many. The game clock reportedly didn’t start on time, giving Gregory time to launch the shot, and the referees left the court with little deliberation. Formal protests and appeals followed.

Because of the COVID pandemic, only one Peninsula Conference team represented at state instead of two — the Archangels.

The team from an Anchorage parochial school with about 50 students dominated its way through three days of state play and won for the first time since renowned coach Phil Jordan guided the Archangels to the 2004 Class 2A title.

“We didn’t let any of what happened affect us,” Gregory said. “From the very start of the season we wanted to compete for a championship.

“We were hungry the whole time and we wanted to win.”

Wilcox excelled in the paint from the opening tip. He scored nine consecutive points to help give the Archangels a 23-12 lead with 4 minutes, 59 seconds remaining in the first half.

Gregory finished with 17 points, junior Timothy Bennett grabbed a game-high 11 rebounds and senior Daniel Bennett was credited with 10 assists for Lumen, which shot 58% from the floor to finish the season with a 13-3 record.

An interesting side note: Gregory quarterbacked the Dimond High football team last fall while attending Lumen and plans to do so again in a few months.

Tanana is located where the Tanana and Yukon rivers meet, about 275 miles north of Palmer in Alaska’s Interior. There’s about 250 residents there and about 45 students in the school. The Wolves were making their second championship-game appearance and their first since finishing second in 2007.

According to the Alaska School Activities Association, 170 schools compete in 1A basketball. This year, eight teams advanced to state instead of the usual 16 because of COVID-19.

“You have to be thankful for this opportunity because not a lot of schools get it,” said Tanana junior Savien Linnear, who tied John Erhart with a team-high seven points.

The Wolves’ roster featured eight players with only one senior — Michael Roberts, who scored four points. What’s next for the rest of the team?

“As soon as we get home, it’ll be time to grind. We’ll do whatever it takes to get back here next year,” Linnear said.

The conference tournament kerfuffle didn’t deter Lumen. An East High standout in the late 1990s, Trombley and the Thunderbirds seldom made friends under late, great coach Chuck White. What happened in Ninilchik last month was completely out of his team’s control but it still felt like the Archangels donned a bit of a black hat at state.

“The learning lesson is life can be full of distractions,” said Trombley, who was part of East’s Class 4A runner-up teams in 1996 and 1998, losing each of those game by one point. “You need to be able focus on the real goals.

“For us, that goal was to always win a state championship.”

Trombley got emotional as he thought about what White taught him and how Jordan helped when he arrived at Lumen.

“Coach White, God rest his soul, is always on my mind. He was a great man,” Trombley said. “But Jordan and I have always had a great relationship and he’s always been a mentor.”

“He is the one who’s said (1A) is the toughest one to win because of all the schools. It’s huge. It’s been a long road to get here.”