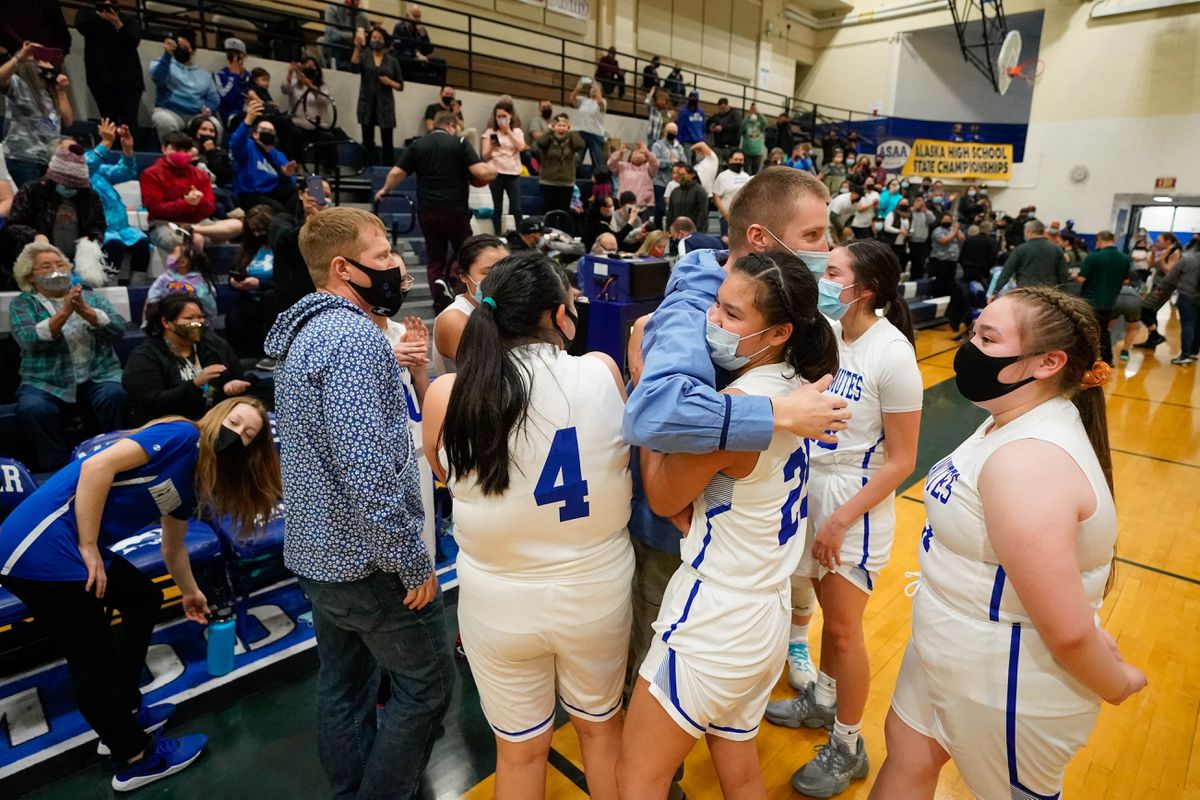 PALMER — The Newhalen Malamutes outshined the Northern Lights on Saturday.

They dominated all aspects of the game to claim a 63-33 victory over the Shishmaref Northern Lights in the Class 1A girls state championship game Saturday at Palmer High School.

Led by junior Johnna Nanalook, who accounted for nearly half of her team’s points with a game-high 31 points, Newhalen captured its fourth girls title in school history and its first since 2014.

“The past few years we haven’t had a team that has been able to come this far so I bet the community is pretty proud,” Nanalook said. “It’s a huge basketball village, everybody plays basketball.”

Nanalook, who scored 18 points before halftime, has been a potent weapon all season and was one of four Malamutes to earn all-tournament honors.

“She’s out heart and soul on offense,” coach James Barthelman said. “I’ve been telling her for three years that shooters shoot, and I think she averaged 30 points a game in all three playoff games.”

As dangerous as Newhalen’s offensive was with Nanalook leading the charge, its defense was equally as dominant. Sophomore Aileen Lester grabbed a game-high 11 rebounds, and though she scored only scored four points she was a strong presence in the post on both ends of the court.

“I’m definitely not known for my shot,” said Lester. “I change the game with defensive rebounding. That’s where I cook and help my team.”

Lester and Nanalook have a friendship that dates back to junior high, and their connection is as harmonious on the court as it is off.

“I rely on her a lot and we work together pretty well,” Lester said. “We’ve been together since middle school. We even each other out and have a feel for each other on the court.”

At the 2019 state tournament, Newhalen lost a first-round game to eventual state champion King Cove. That tournament was at the spacious Alaska Airlines Center in Anchorage; this year’s tournament was held at various in high school and middle school gyms in the Valley, and crowds were limited due to COVID-19.

“The gym was a lot bigger and a lot more packed,” Lester said of the 2019 tournament. “It had a different feeling to it but (this) was still very exciting and still made my belly tingle a little bit.”

The Malemutes were up 38-15 at halftime thanks to an explosive second quarter where they outscored the Northern Lights 18-2.

Newhalen led by as many as 32 points late in the third quarter before turning to its bench in the fourth quarter.

The Northern Lights were led by sophomore Autumn Barr with 18 points and junior Tricia Weyanna with 13 points.

Newhalen is a small village in southwest Alaska that sits on the northern shores of Lake Iliamna. People there are passionate about basketball.

“It’s a pretty small area and I’m pretty sure a lot of people don’t really know where we are in Alaska so it is pretty cool to come from a really small school and represent really well at a big tournament,” Nanalook said.